GTM: US energy storage deployments up 944% since last year 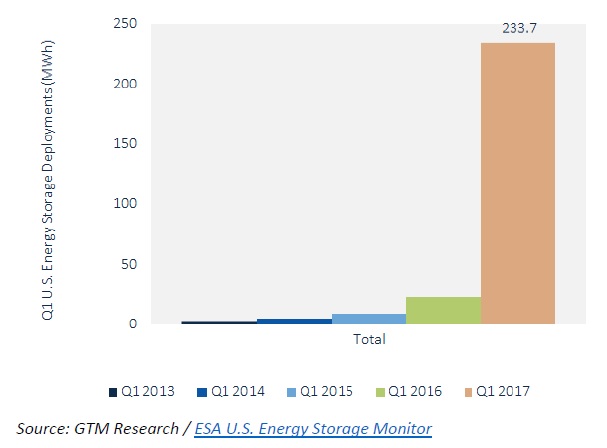 Energy storage in the US has just enjoyed its greatest quarter for megawatt-hours deployed, up almost 1000% from the equivalent period last year, installing 233.7MWh.

This was among the findings of GTM Research’s US Energy Storage Monitor, the market analysis firm’s quarterly report, which said that Q1 2017 saw a leap of 944% in deployment over Q1 2016, when just 22.4MWh was deployed. It also slightly edged out the final quarter of last year, which was described by GTM analyst Ravi Manghani as itself an “inflection point” for US energy storage, with 230MWh brought online.

As with that quarter, Manghani explained that “much of” the growth in megawatt-hours this time around can be attributed to a growing trend for longer duration energy storage projects in the utility-scale sector, as well as ongoing efforts in California to deploy capacity to mitigate for the Aliso Canyon gas leak.

Industry ‘shouldn’t get too comfortable’

Manghani said it was likely the Aliso Canyon projects could skew the picture a little this year, and there was a strong possibility the first quarter of the year could turn out to be its strongest. He said the industry “shouldn’t get too comfortable” with this strong showing early in the year, adding that “there aren’t too many 10+MWh projects in the 2017 pipeline”.

Measured in megawatts, Q1 2017 followed a previously seen trend of a smaller first quarter in each year to follow the fourth of the previous. In the first quarter, 71MW of energy storage was deployed, which was a decrease of 50% from Q4 2016 (140.8MW), but a significant 276% year-on-year increase from Q1 2016, when just 18.9MW was installed.

The vast majority of demand appears to be for in front-of-meter applications such as grid services and pairing with large-scale renewables, comprising 91% of all deployments in the quarter. Meanwhile, behind-the-meter, or customer-sited energy storage declined 21% in megawatt-hour terms from Q4 2016 and 22% in megawatts from Q1 2017.

Manghani explained this reduction as attributable to California’s pausing of its SGIP (Self-Generation Incentive Programme) scheme, which has since reopened (with all funding for the year already allocated) which lead to a drop in the non-residential market. This was evident in the residential market falling only by 5% quarter-over-quarter, compared to a 26% drop in non-residential installations. 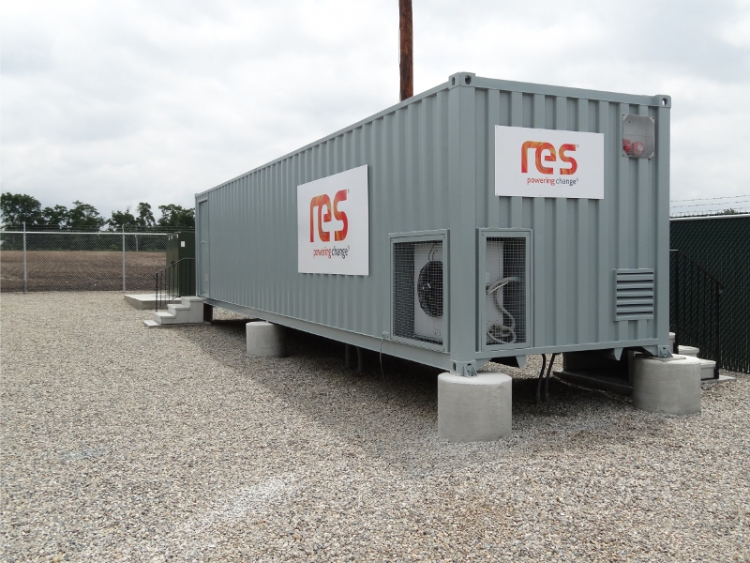 Lithium-ion batteries comprised 96.5% of the total market for both utility-scale and residential deployments, with GTM expecting that dominance to continue “over the next few years”. The second-placed technology was flow batteries, with just 3% of market share, mostly coming from one California project, with lead-acid batteries in third place, accounting for a 0.7% share of the market.

Among states, it was unsurprising to see California in top spot, with second place closely contested by five other states: Hawaii, Massachusetts, New York, Texas and Arizona. The US Energy Storage Monitor also sweeps the states to report on policy and market developments behind- and in front-of the meter across the country.

Long term, GTM expects energy storage markets in the US to total 2.6GW in 2022, representing a near 12-fold increase from 2016’s 221MW. Behind-the-meter will grow in importance, constituting as much as 53% of the total market by 2022. By that year the total market could be worth US$3.2 billion.

Residential storage sales only represented about 4% of energy storage revenues during 2016, but Manghani and his team expect a 650% increase during this year from last year’s figures. Non-residential sales will continue to make far more money, however, growing by US$128 million this year.