An energy company owned by the government of Queensland has recognised the “important role” battery storage will play in creating Renewable Energy Zone (REZ) hubs in the Australian state.

A utility-scale battery energy storage system (BESS) tender was opened earlier this month by Stanwell, a major supplier of electricity to the wholesale market and commercial and industrial (C&I) retail customers in Queensland.

Like several other states in Australia, Queensland wants to build REZ facilities and in December 2020 our sister site PV Tech reported that “overwhelming interest” was shown by renewables investors in the AU$145 million (US$109 million) plans. The government was flooded with expressions of interest, receiving enough proposals for more than 60GW of clean energy across 192 projects.

In June, Energy-Storage.news reported that Stanwell, which operates coal and gas plants as well as one small hydroelectric facility and procures renewable energy from third parties, was considering siting a 150MW / 300MWh BESS at or near the site of Tarong, one of its two coal plants.

On 14 October, the energy company launched a request for tender seeking interest from engineering, procurement and construction (EPC) contractors. Stanwell told Energy-Storage.news this week that this is a two stage process, open for supply and installation of battery system and related transformer substation works in two Renewable Energy Zones, one in southern and the other in central Queensland.

A Stanwell spokesperson said that the company “recognises the important role that large-scale BESS will play in the National Electricity Market (NEM) as it moves to a predominantly renewable-based energy system”.

It is progressing detailed plans for the 150MW two-hour BESS at Tarong Power Station, which will be in the southern REZ. That project would be expected to begin commercial operations in 2023, while the group is also investigating development of a second 150MW / 300MWh battery system in the central REZ.

The latter would be located near Stanwell Power Station, the other of the company’s coal-fired power plants, and would likely be brought online in 2024, if it goes ahead.

The company’s acting CEO, Adam Aspinall, had previously said that locating battery storage at the Tarong Power Station site allows Stanwell to “capitalise on existing land and connection infrastructure,” as well as supporting investment in renewable energy and in system security and reliability.

There have been a number of similar plans in the US, Australia and elsewhere that have identified thermal power plant sites as conveniently locations for grid-scale batteries, offering valuable grid interconnection capacity. In a growing number of cases it is also a chance to repurpose the facilities as fossil fuel generators close down.

Stanwell’s spokesperson told Energy-Storage.news this week that the BESS for the southern REZ is the primary focus for the procurement process that has just been launched, given the nearer timeframe for delivery, but it is also open to hearing from potential bidders interested in delivering the other BESS too.

Signing a single contract for the two projects to be carried out successively could streamline the process, lowering capital and operating costs.

The projects would create local job opportunities, both in their eight month construction periods and 20-year expected operational lifetimes. Bidders must comply with state procurement policy and best practice principles, including health and safety, while Stanwell is also keen to hear about bidders’ sustainability practices, including battery and component recycling.

“The proposed batteries will enable us to support investment in renewables and help maintain system security and reliability. The batteries will provide value through energy-shifting (intra-day and day-ahead), while also delivering essential system services,” the company said in a statement sent to Energy-Storage.news.

Stanwell is currently completing its Front End Engineering Design work for the projects and intends to make its Final Investment Decision in the first quarter of 2022. The request for tender can be found on the Queensland government tender portal here.

Other recent energy storage industry developments in Queensland include the state government’s AU$14 million commitment to refurbishing its only pumped hydro plant which Energy-Storage.news reported in July, and renewable energy developer Genex Power preparing to construct a 50MW / 100MWh BESS in the state using Tesla Megapacks, having identified strong merchant opportunities in the NEM for the resource to take part in.

A battery system installed by the University of Queensland in 2019 demonstrated a strong business case for the technology, with it taking part in numerous opportunities to earn revenues while supporting local system reliability and renewable energy integration. 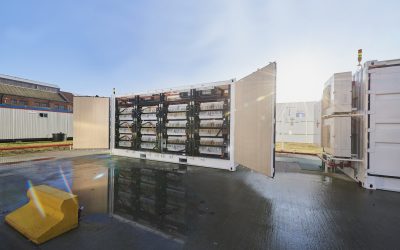 November 24, 2021
The success in a recent capacity market auction of large-scale battery energy storage system (BESS) projects in Belgium is a sign of the European country’s energy storage market maturing, Energy-Storage.news has heard.

November 24, 2021
The government of Queensland will commit “at least AU$10 million (US$7.21 million)” to building a multi-user vanadium processing plant to capitalise on natural resources in the Australian state.