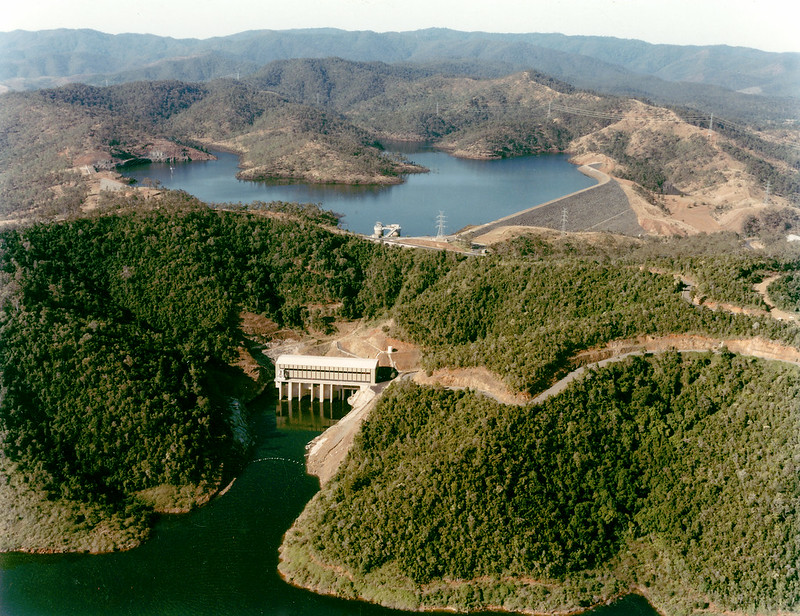 Aerial photo of the Wivenhoe plant, taken in 1985, a year after the facility was commissioned. Image: Queensland State Archives.

The state government of Queensland, Australia, has committed to a AU$14 million (US$10.5 million) project to refurbish and modernise a 570MW pumped storage hydroelectric plant.

The works were announced yesterday from the office of Mick de Brenni, who is Queensland’s minister for energy, renewables and hydrogen, as well as its minister for public works and procurement. Major maintenance works at Wivenhoe Pumped Storage Hydroelectric Power Station will begin during this month and continue until late October.

Wivenhoe opened in 1984 and is part of the generation portfolio of CleanCo Queensland, a government-owned energy company. It is CleanCo’s biggest asset in its 1120MW fleet, which includes three run of river hydro plants and a 385MW combined cycle gas turbine (CCGT) plant.

The Wivenhoe maintenance works will include repair and refurbishment for one of the two 285MW turbines, corrosion protection painting for machinery and pipes as well as repairs to a transformer. The works are expected to employ around 100 workers and de Brenni said they will be critical to keeping the plant running reliably.

The announcement comes a few weeks after there was an explosion at Callide C, an 825MW Queensland coal power plant facility which subsequently went offline. When this happened, Wivenhoe played an important role in maintaining stability and supply of energy for the local grid, Minister Mick de Brenni said, revealing in a statement that the pumped storage plant was ramped up to 530MW over a four-hour period.

De Brenni called Wivenhoe the “jewel in the crown of Queensland’s publicly-owned energy storage fleet,” adding that maintaining the facility will be critical in achieving the state’s renewable energy target of 50% by 2030. Meanwhile CleanCo’s CEO Maia Schweizer said that Wivenhoe, which has been in CleanCo’s portfolio since 2019, is more frequently in use now that the state has emphasised the importance of low-emissions energy.

“We must maintain our generating assets in line with this change in operations to ensure we can continue to meet our mandate to provide reliable, affordable energy for our customers and the Queensland community. The recent incident at Callide Power Station highlighted the important role fast ramping and flexible generation assets like Wivenhoe Power Station play in supplying energy reliably for Queensland,” Schweizer said.

Wivenhoe could become one of three pumped hydro plants in Queensland

While Wivenhoe is currently Queensland’s only pumped hydro plant, construction work has begun on another, the 250MW / 2,000MWh Kidston Pumped Storage Hydro Project in Northern Queensland, by developer Genex. Genex achieved financial close on the AU$777 million project in May.

The pair could be joined by another, even larger plant in the state in a few years’ time. In June, the state government of Premier Anastasia Palaszczuk announced AU$22 million for detailed design and cost analysis work for a pumped hydro storage plant with 1GW output and 24 hours storage capacity (24GWh) at Borumba Dam, a site close to the high voltage electricity transmission network. Its 1GW output would be equivalent to 15% of Queensland’s average electricity demand.

The state also owns generation and retail (gentailer) electricity company Stanwell, which Energy-Storage.news reported in June is considering a 150MW / 300MWh standalone battery energy storage project at the site of Tarong Power Station, one of its coal power plants.

A couple of weeks ago, Energy-Storage.news gathered reports on several new planned or proposed large-scale pumped hydro power plant projects around the world, from California to Uzbekistan for a blog.