Some of what’s already in place at the Hornsdale Power Reserve project, South Australia. Image: Neoen-Tesla.

Australia’s national Clean Energy Finance Corporation (CEFC) has said it will commit AU$50 million (US$34.14 million) to help fund the expansion of the landmark Hornsdale battery project in South Australia.

The national ‘green bank’ CEO Ian Learmouth said that CEFC sees “grid-scale batteries as a critical part of the next wave of investment that will support the rapid and unprecedented challenge we are seeing across Australia’s electricity systems”.

Hornsdale is unquestionably a landmark project for Australia, and not solely because of the attention brought to it by Elon Musk’s offer to step in after south Australia suffered a serious blackout and deliver a storage system within 100 days (which Tesla then did).

Currently at 129MWh capacity and sited close to large-scale wind farms, the battery system was assessed to “undeniably” have been a success in the first year since installation according to Aurecon, an independent engineering and infrastructure advisory company. It has been found to have already delivered AU$50 million in savings for consumers and the expansion is expected to continue increasing the amount saved on network costs and through revenues raised by playing to the National Electricity Market (NEM).

Neoen announced from its Sydney office this morning that that it will expand the Hornsdale Power Reserve battery system by 50%, providing “additional stability while continuing to reduce the cost of electricity to consumers”. Since building what appears to have only been the first part of the Hornsdale system, Neoen has announced or executed a number of other projects in Australia, including plans unveiled in September for a an energy superpark in South Australia that would comprise 1.2GW of wind, 600MW of solar and 800MW of battery storage capacity.

Tesla will continue working with Neoen on the project, adding 50MW / 64.5MWh more of its systems, which thus far have been the company’s modular Powerpack solutions, each of 210kWh capacity and stacked to created a larger system. This year, Tesla released Megapack, which is a scaled-up, 3MWh-per-block solution, although a release sent out by Neoen said that additional Powerpacks will be used for the expansion.

Government-owned ‘green bank’, CEFC emailed Energy-Storage.news today to say it is committing “up to AU$50 million in project finance for South Australia’s landmark ‘Big Battery’,” and looked forward to working with project partners including the national renewable energy agency (ARENA) and the South Australia state government “to improve grid security and maximise the benefits of renewable energy”.

South Australia’s government has also committed AU$15 million to the project expansion, in particular for a new application for Hornsdale – to help prove the role of energy storage using large batteries to provide inertia to the grid. This has been traditionally done with thermal generation assets that need to run for much longer periods of time than batteries performing the equivalent task and which of course produces emissions and incurs fuel costs, a tech topic Fluence market director Marek Kubik blogged about for this site some time ago. In that piece, Kubik said that using 1/10th the capacity of thermal generation, energy storage can do the same job of stabilising the grid.

“The Hornsdale Power Reserve has already delivered substantial benefits to South Australia, providing grid reliability, reducing energy costs and integrating the State’s substantial renewable energy resources into the grid. It is an exciting model that can be extended across the grid to improve security,” CEFC CEO Ian Learmouth said.

“By delivering the first project financing of a stand-alone NEM-connected battery in the Australian market, our goal is to demonstrate the market potential of grid technologies for other investors and developers,” Learmouth said.

The 50% of expanded capacity is expected to come online by the middle of next year. 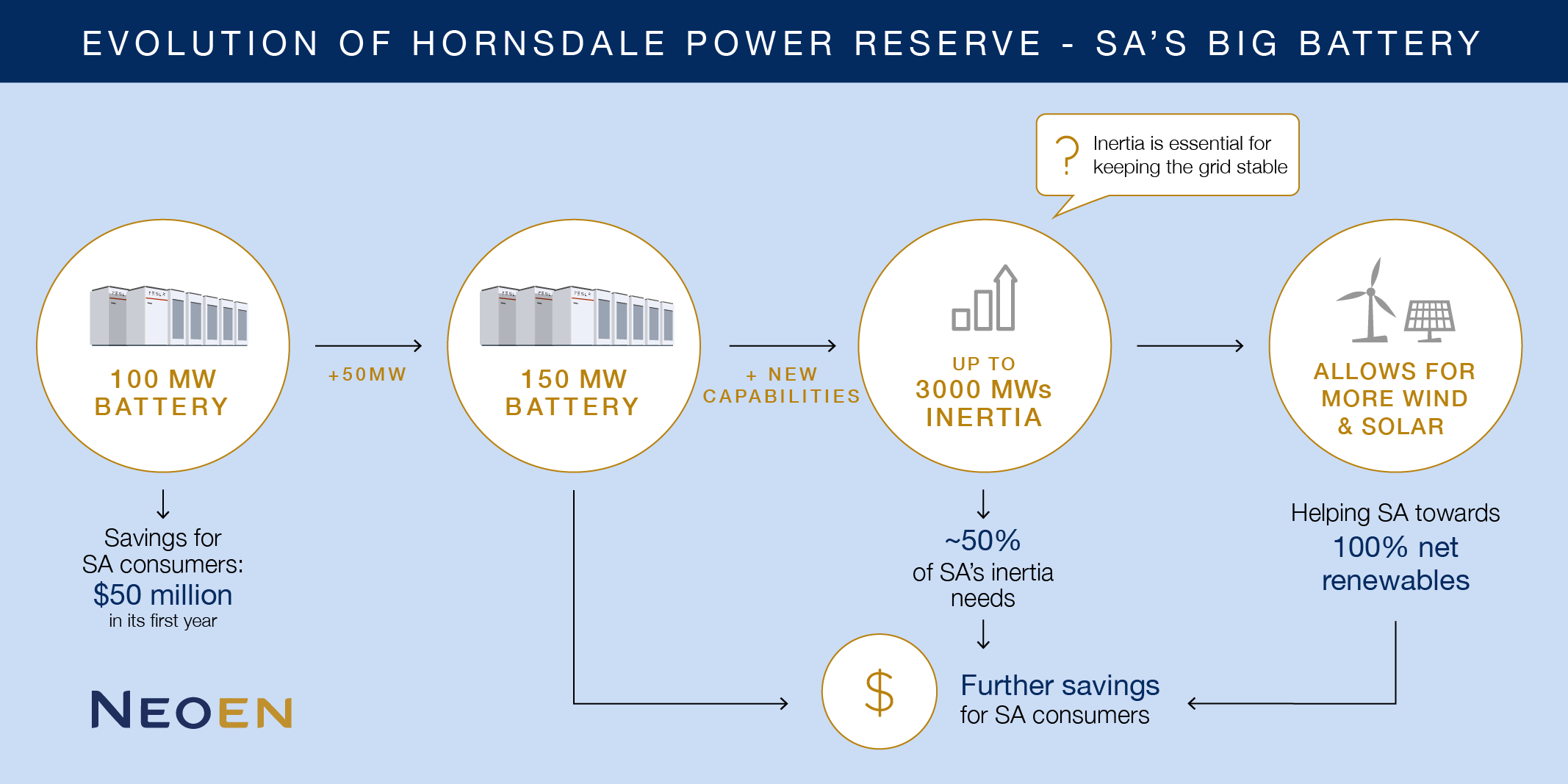