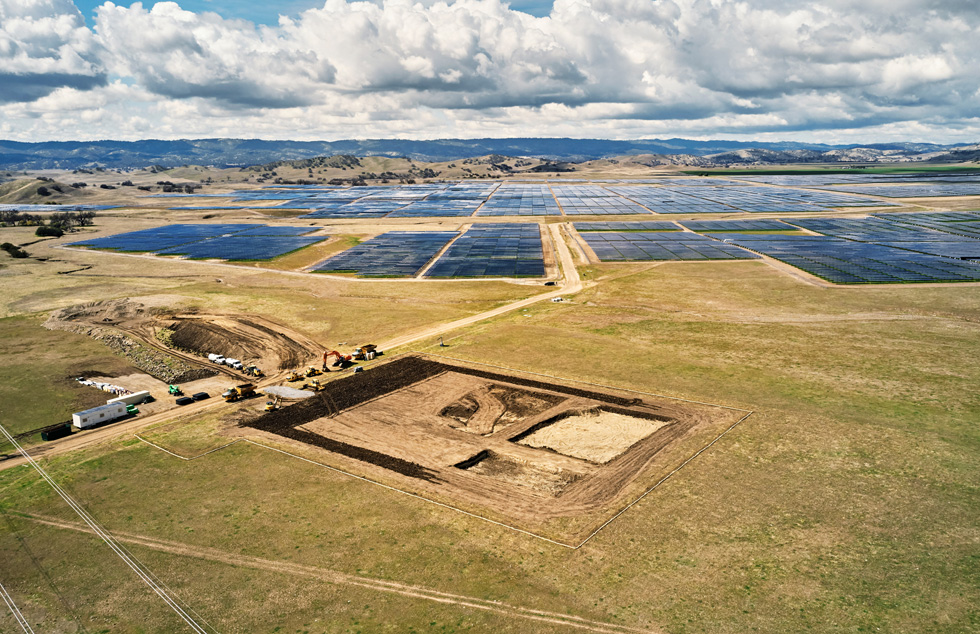 The California Flats project site, with the solar PV plant behind the area being prepared for installation of the Tesla Megapacks. Image: Apple.

While it is better known for putting lithium-ion batteries in phones, tablets and computers, consumer technology company Apple said it is building a 240MWh battery energy storage system (BESS) at a solar PV plant in California.

The company said yesterday (31 March 2021) that it is adding the large-scale battery system at California Flats, an existing PV plant complex in southeast Monterey County on cattle ranch land owned by media services company Hearst. The solar project was developed by vertically-integrated thin-film solar module manufacturer First Solar and sold to asset management firm Capital Dynamics in August 2017, shortly before the first of two phases reached commercial operations in December of that year.

The total capacity of the plant is 280MW and the second phase went online in 2019 with our sister site PV Tech reporting it to be one of the first utility-scale solar facilities to use First Solar's large-format Series 6 PV modules. Apple agreed a power purchase agreement (PPA) to buy 130MW of that capacity while California investor-owned utility Pacific Gas & Electric (PG&E) signed a PPA for the remaining 150MW. Apple said yesterday that the battery project supports its 130MW portion, which accounts for all of the company’s renewable energy capacity within California. The battery storage system will store excess energy generated during daytime hours and inject it to the grid when needed.

The company said it is researching new energy storage technologies as well as investing in utiity-scale lithium-ion battery storage at California Flats, adding that it also has distributed energy storage facilities in California’s Santa Clara Valley and in a microgrid at it Apple Park HQ in Cupertino, also in California.

Apple is committed to producing renewable energy equivalent to powering 100% of its operations and has already reduced its carbon emissions by 40% since it began efforts. Along with the battery project announcement yesterday it said it is going fully carbon neutral by 2030 and said over 110 partners in the company’s manufacturing supply chain have also committed to going to 100% renewables for products, components and services they provide to Apple. This equates to around 8GW of new clean energy capacity, the tech company said.

Digging by technology news website The Verge found documents filed with Monterey County planners that showed the battery storage system will be supplied by Tesla, consisting of 85 Tesla Megapack ESS systems. According to the document, the limited liability project companies originally set up by First Solar to execute the solar project which applied for land permitting in 2015 to the county, asked for an amendment to the permit last March and were granted that permission in June 2020. The document also showed that the project’s scope includes the construction of a 60MW electrical substation at the site.

Energy-Storage.news has approached Apple for further details but did not receive a reply by the time of publication. The project would rival some of the world’s biggest battery storage facilities — many of which are already in, or planned for installation in, California — although Apple did not give an expected completion date in its announcement yesterday.