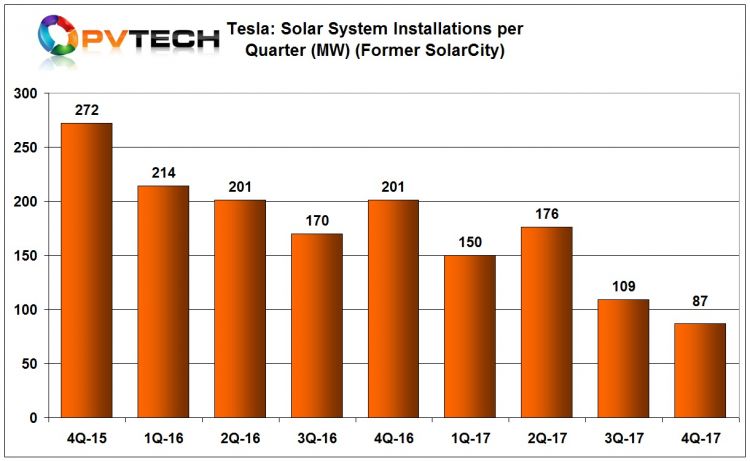 Tesla reported another major decline in its residential solar installations for the fourth quarter of 2017, while a supply shortage for its residential energy storage system ‘Powerwall 2’ has created a customer backlog of solar and storage installs of more than one year.

Tesla reported fourth quarter 2017 financial results that highlighted the rapid decline in solar installations. The company reported solar system installations totalling 87MW, a 20% decline from the previous quarter, which had seen a decline of 38% from the second quarter of 2017. The overall decline in installations through 2017 was 42%.

Tesla is unlikely to retain its leadership in the US residential market when rivals such as Sunrun report fourth quarter installations. However, major rivals to Tesla have seen installations flat line in 2017. Tesla will remain the leading residential installer for 2017 as installs remained until the fourth quarter much higher than the others (Sunrun, Vivint Solar, SunPower).

The declines have been self inflicted as the company moved away from commercial and industrial rooftop installations as these were said to have generated the lowest profit margins, while shifting residential rooftop sales to internal car sales showrooms in the US, compared to direct sales when the company was SolarCity.

The company has recently changed direction and increased direct sales through plans to establish 800 retail locations within Home Depot stores across the US.