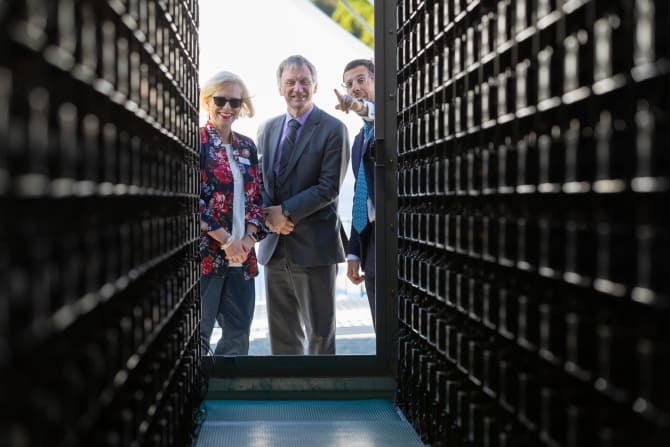 Scotland’s first utility-scale battery storage facility has been officially opened today, having begun delivering sub-second balancing services to National Grid at the end of June under a bespoke agreement secured before the hotly contested Enhanced Frequency Response (EFR) auction of 2016.

The 20MW Broxburn Energy Storage facility was built by RES, which had sold the project to The Renewables Infrastructure Group (TRIG) in August last year for £20 million. It was the first project to have been acquired by TRIG and RES’ fourth in the UK, with the company now managing the site.

Richard Crawford, director of infrastructure at TRIG’s investment manager InfraRed Capital Partners, said it was “an exciting day for the company” to see its first battery storage project completed.

Testing of the project, which uses batteries from Samsung SDI, commenced in May, enabling battery commissioning to be completed. This was followed by final testing under the EPC construction contract, which completed on 30 June when the battery began to deliver its contracted service to National Grid.

The project had secured an initial four-year bespoke bilateral agreement to provide dynamic, two-way import and export sub-second balancing services to National Grid. Sister title Solar Power Portal was told in 2017 that revenues over the contract are substantially based on pre-determined, RPI-indexed availability payments.

Such a bespoke agreement was no longer available when National Grid moved to a tender auction model for EFR services, when almost 1GW of storage projects competed to win 200MW in available contracts.

Opening the site today, Scotland’s minister for trade, investment and innovation Ivan McKee said: “I am very pleased to have the chance to open the Broxburn Energy Storage project today, which is Scotland’s first sub-second response energy storage project.

“A welcome addition to Scotland’s low carbon energy system, projects such as this one can increase system flexibility and create opportunities for the further decarbonisation of Scotland’s economy.”

Both TRIG and RES added that the battery would allow for greater levels of renewable energy to be brought onto the UK’s energy system by helping to avoid the cost of new grid infrastructure.

Rachel Ruffle, RES’ managing director, said: “We believe that this project will play an important role in demonstrating this and will encourage policymakers and regulators to accelerate the removal of barriers to wider deployment of energy storage in the UK.”

Broxburn represents Scotland’s largest energy storage facility, with a 2MW battery installed at a power station in Orkney thought to be the next largest. This is followed by the 1MW/1.3MWh ‘Batwind’ project, connected to an offshore floating wind farm, which was brought online by Younicos in July this year.