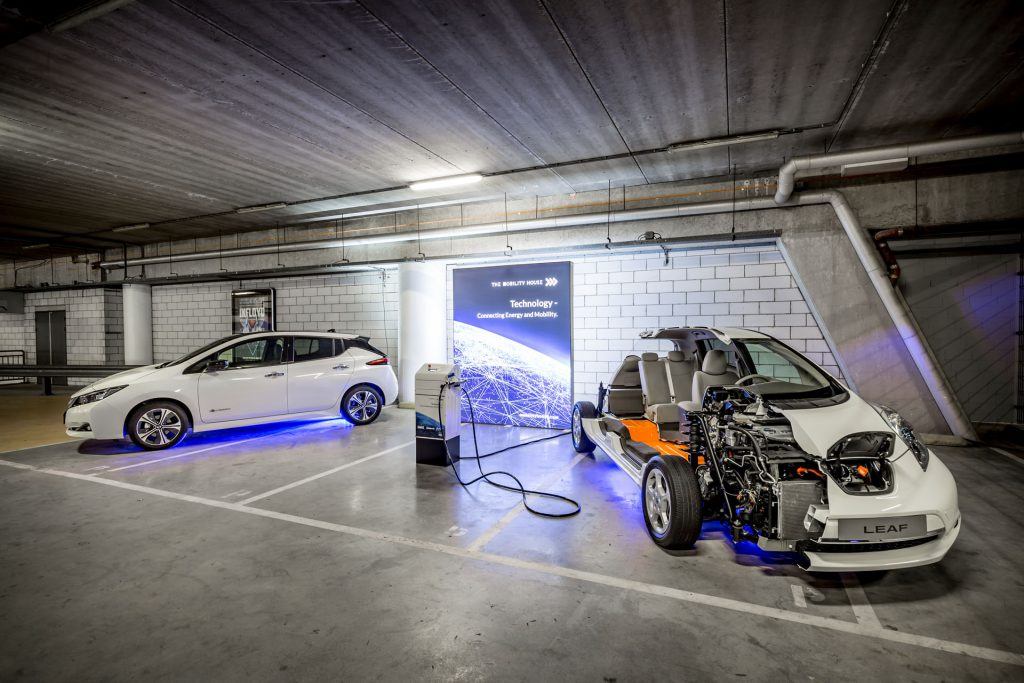 Faster than you think? RMI argues that many could miss out on economic and societal opportunities without ‘comprehensive’ and ‘strategic’ frameworks. Image: Mobility House.

By the middle of the 2020s, using hybrid ‘portfolios’ of batteries and renewable energy sources will economically outperform existing gas power plants, while the combination of technologies is already cost-competitive with building new gas plants, a new report from the US-based Rocky Mountain Institute has said.

A September report from the group had discussed the risk associated with building new gas plants in the US, while the latest report, ‘Breakthrough batteries: powering the era of clean electrification’, looks at the economic case for using a growing range of battery types for an ever-more rapidly expanding range of applications.

Perhaps more significantly, the RMI paper argues that “many market actors” have yet to realise the fast pace at which adoption of batteries for integrating renewable energy and taking internal combustion engine (ICE) vehicles off the road will happen. As more and more investment in batteries takes place, costs continue to go down and the devices and systems they are deployed in become more sophisticated through innovation. Added to that, RMI said, “self-reinforcing feedback loops” are created as favourable public policies, R&D funding, more manufacturing capacity and economies of scale link together. 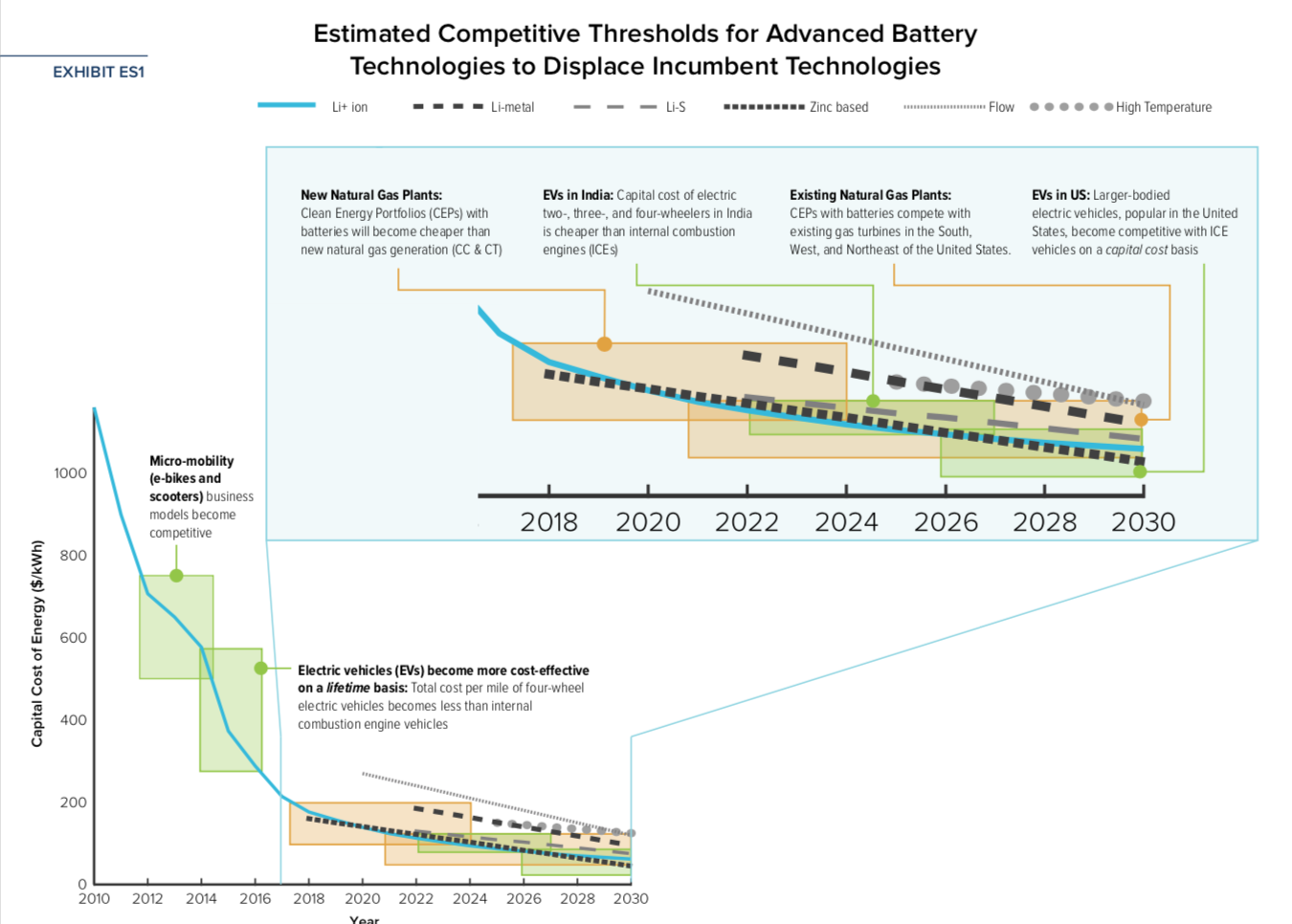 RMI’s report quoted Bloomberg New Energy Finance (BloombergNEF) figures that estimate previous and planned investments in manufacturing capacity through to 2023 add up to around US$150 billion. Meanwhile, Mercom Capital, which produces quarterly reports on venture capital (VC) funding in the battery storage, smart grid and energy efficiency markets, found that VC funding for battery storage companies in the first nine months of 2019 increased 104% from 2018’s first nine months, up from US$783 million across 38 deals, to US$1.6 billion across 25 deals.

Tellingly the single biggest VC funding investment recorded by Mercom in those first nine months of this year was registered by Northvolt, which is set to build two gigawatt-scale lithium-ion battery factories in northern Europe totalling 56GWh of capacity, backed by big players in the automotive industry. Indeed, all of the other top five VC funded deals in that period went to battery or battery component manufacturers of different types and scales, barring Energy Vault, the gravity-based long duration energy storage company recently invested in by the Softbank Vision Fund to the tune of US$110 million. 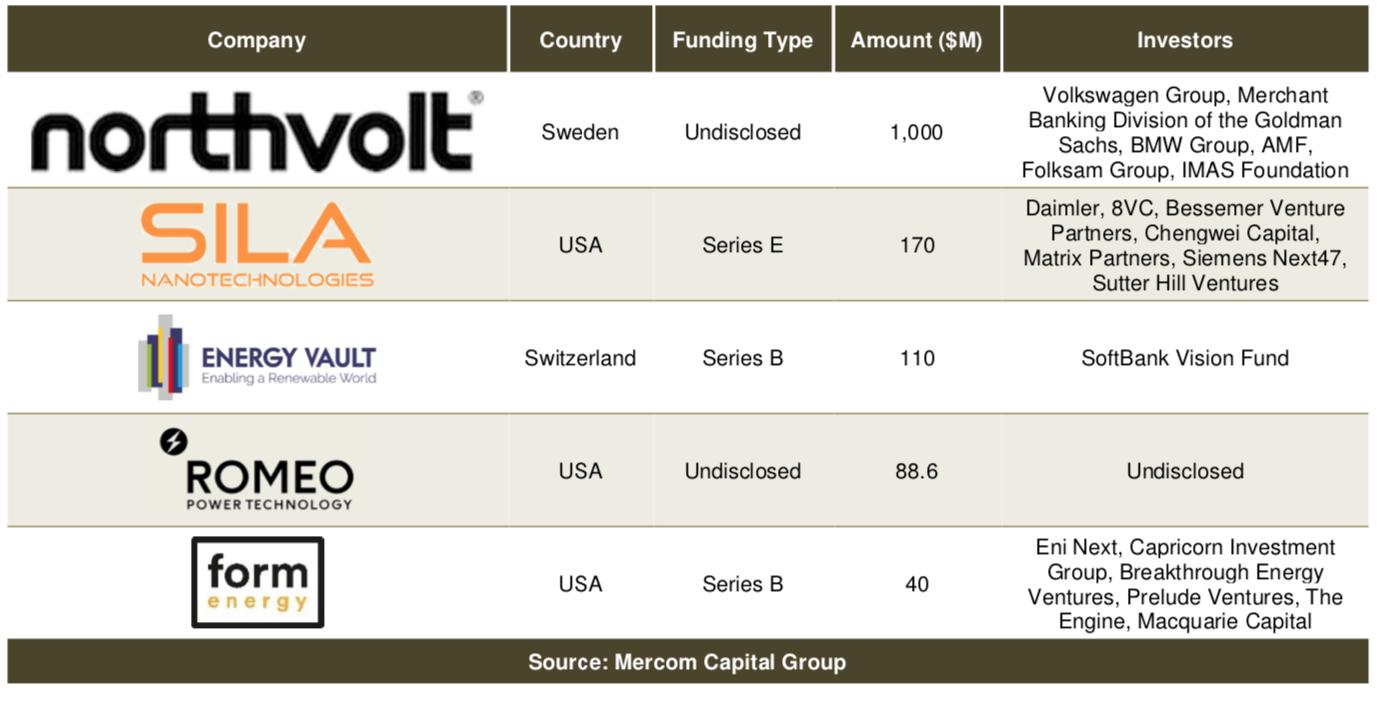 Top five VC-funded deals in the first nine months of 2019, according to Mercom Capital. Image: Mercom.

Meanwhile, RMI identifies that in addition to improvements to advanced lithium-ion batteries, opportunities will be created for different kinds of battery in response to a diversifying field of applications. Solid-state (including lithium) could become more popular for heavy mobility use, long duration technologies such as zinc-based, flow and high temperature batteries could help integrate larger shares of renewables and balance the grid, while high power batteries could be useful despite their higher capital cost in terms of balancing the grid and integrating fast EV-charging in particular.

Energy-Storage.news has heard from various sources over the past few years of its existence that lithium-ion is likely to dominate the overall stationary storage market for at least the next decade. RMI now finds that non-lithium battery technologies are expected “to have made significant commercialisation steps…as early as 2025 and no later than 2030,” into the market applications highlighted above.

In their comprehensive 84-page report, RMI authors Charlie Bloch, James Newcombe, Samhita Shiledar and Madeline Tyson argue that the time is now to think “comprehensively and strategically” to create battery “ecosystems” from the angles of regulation and policy, or else they will be easily outpaced by the improving technologies and improving economics of batteries.

This of course includes the growing competitiveness of batteries-plus-renewable against fossil fuel plants, with the group’s report finding that based on expected BloombergNEF cost decline assumptions (US$86 per kWh by 2025), new natural gas plants already planned to go ahead will lose badly, and that by as early as 2021, existing gas plants will be less economical to run than what RMI has dubbed ‘Clean energy portfolios’: the hybrid combination of energy storage with renewable sources and other technologies that could include demand side response, energy efficiency, and other distributed energy resources (DER).

“The rate of change in the battery space, measured in terms of both falling prices and diversifying performance attributes of new technologies, is outpacing the adaptive capacity of the electricity sector to integrate new solutions,” the RMI ‘Breakthrough Batteries’ report said.

“Dramatically lower storage costs will disrupt conventional assumptions about optimal grid architectures and open a rapidly widening array of opportunities for delivering energy services. Utilities and their regulators must build scenarios based on forward price curves to assess the possible implications of falling prices for batteries and renewable power in order to minimise the risks of investing in assets that could soon be stranded.

“The synergies now emerging from the smart combination of renewable supply, storage, and demand flexibility will require new methods of planning and analysis as well as revamping traditional utility business models.”