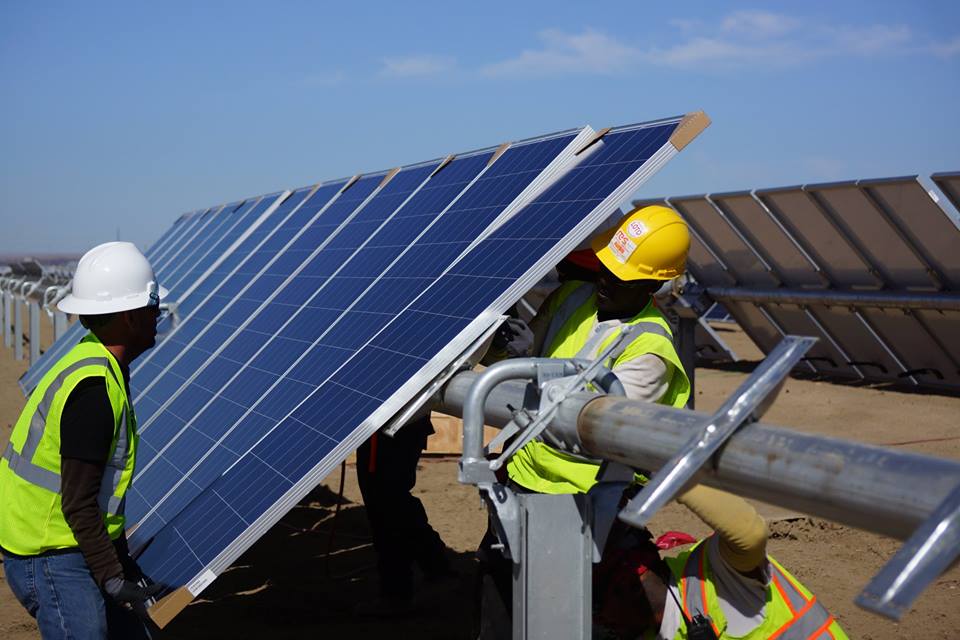 Utility-scale solar farm under construction in the US by RES. Image: RES Americas Facebook page.

Applications made to the government of New South Wales in Australia for two solar farms totalling 285MW of capacity are open to comment from stakeholders and members of the public.

Tarleigh Park Solar Farm would be a 90MW utility-scale solar PV park, the development of which is currently being investigated by UK-headquartered developer RES (Renewable Energy Systems), in Blighty, a small development 23km southeast of the nearest ‘big’ town, Delinquin (population: around 8,000).

About 2km away would be Currawarra Solar Farm, a 195MW facility, for which RES has also made an application. In both instances, RES said it has performed “a comprehensive suite of environmental surveys” and the viability of both projects is being assessed through “extensive community consultation”.

Currawarra would use 620 hectares of land, requiring around 18 months for construction. According to RES’ 240-page assessment, impacts would include a temporary suspension of agricultural activity on the site, as well as some noise during the construction period.

While contributing to local and national climate change objectives and improving electricity reliability and security, Currawarra’s construction will create 200 direct and 320 indirect jobs, while four direct jobs and 12 indirect jobs will be created to operate and maintain the plant once built. It could also provide around AU$35.9 million of economic stimulus over its 25-year lifetime.

Tarleigh Park Solar Farm meanwhile will use around 250 hectares of “rural freehold land currently used for irrigated cropping”. Again there would be some construction noise and suspension of agriculture at the site, but the landowner is able to offset this by increasing production on land held elsewhere, RES said. It will provide similar benefits to Currawarra, while creating 150 direct and 240 indirect jobs during construction and an estimated economic stimulus of AU$18.1 million over 25 years.

While certain aspects of design, such as the type of trackers that could be used are still being deliberated on, Currawarra’s design proposal includes 88MW / 44MWh of energy storage capacity. This would be based on lithium-ion batteries, which would be used to ‘smooth’ solar output, provide frequency regulation services and arbitrage of energy. The energy storage system could also mitigate the impacts of failures in parts of the system by allowing them to be isolated from the rest of the network or system.

RES said the Tarleigh Park power plant is also being designed with integral energy storage. Plans call for 32MW / 16MWh of energy storage, again from banks of lithium-ion batteries. The batteries “would be capable of storing energy for release when the use or cost is beneficial”. Again, applications would include network frequency regulation, solar smoothing, improved reliability and arbitrage.

The plans have now gone on public display at the New South Wales Planning & Environment website. Members of the local communities have until 21 December this year to provide their comments and views.

Director of resource and energy assessments at the Department of Planning and Environment Clay Preshaw said the projects would be New South Wales’ “first major battery storages proposed for a solar farm in the State”.

“We assess all proposals on their merits, including any potential social, economic, or environmental impacts or benefits. All submissions will be read and considered,” Preshaw said.

While it may be a first for New South Wales, other states across Australia are already playing host, or preparing to host, large-scale solar-plus-storage and wind-plus-storage facilities. Lyon Group has just put three huge projects under development up for sale, while the country's first “unsubsidised grid battery” project is going ahead in South Australia. Tesla has just finished work on a 129MWh system, also in South Australia. A recent report from Australian academics identified energy storage as a big social, environmental and economic opportunity that still required more consumer confidence to reach its potential.