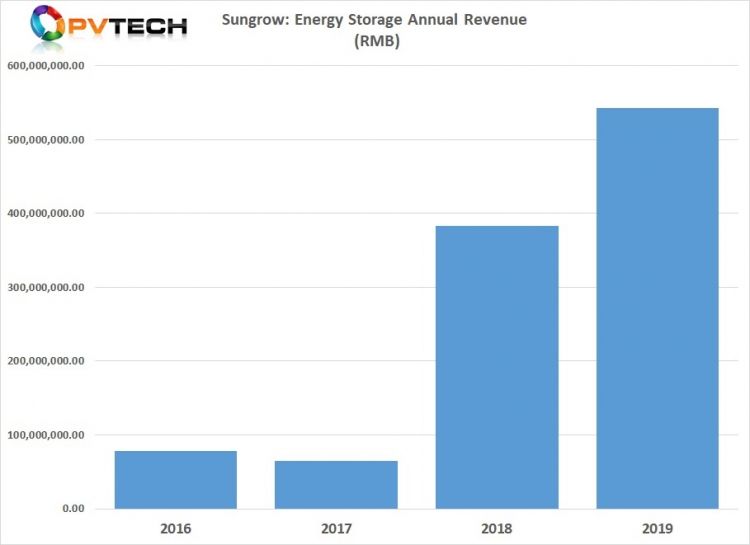 Sungrow said that its cumulative installed global PV inverter capacity exceeded the 100GW milestone in 2019, claiming to be the first supplier to do so. A key export market was shipments to the Americas, which exceeded 3GW.

The company exported a total of 9GW of PV inverters to overseas markets in 2019, an 87.5% increase year-on-year, due to the significant decline in solar installations caused by policy changes in the Chinese domestic market stretching back to May 2018.

In addition to Inverters and Power Conversion Systems, Sungrow also has business units for System Integration and Energy Storage, both of which grew last year over 2018 – system integration revenues accounted for around 61% of total group revenue in 2019.

This story has been adapted from its original form for Energy-Storage.news. Read the original, full version on PV Tech here.

Power purchase agreements (PPAs) have been signed between First Solar and two community energy utility groups for energy from a 100MW solar power plant with 50MWh of energy storage in California’s Kern County.

Kern County is already home to some of the state’s biggest renewable energy projects including several solar PV plants developed by Perrysburg, Ohio-headquartered First Solar, which manufactures thin-film solar modules as well as executing its own projects in a vertically-integrated business model. The company claims an annual manufacturing capacity of 1.9GW DC, all located within the US.

Prolific developer 8minute Solar Energy has bolted a further 3GW of large-scale solar projects onto its pipeline, taking the developer’s tally to more than 18GW.

8minute also confirmed that it had sourced additional corporate-level funding to develop that pipeline further, noting that it would also help advanced the firm’s so-called “new generation” project design that incorporates battery storage.

This has resulted in growth of its project pipeline through its key markets of California, Texas and the US Southwest.

While no specific details of projects were forthcoming, 8minute did stress that it was keen to replicate the model spearheaded by its Eland Solar & Storage Center in Kern County, California. Having received approval for the project last year, 8minute will combine 400MWac of solar with 300MW/1,200MWh of energy storage, providing dispatchable power at a price of under US$0.04c/kWh, the company claimed.

This piece first appeared on our sister site PV Tech. Read the full version of the story here.