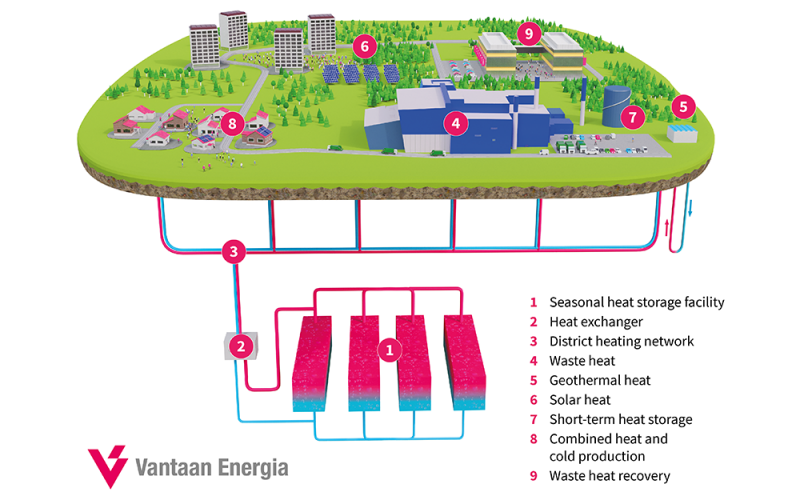 A seasonal heat storage plant which will have a capacity of about 90GWh looks set to begin construction next year in Vantaa, Finland, with water stored in underground caverns heated to 140°C using renewable energy and waste heat.

City energy company Vantaa Energy said at the beginning of this month that it has selected engineering, design and advisory group AFRY and Finnish urban development and construction company YIT as project partners. Project development begins this summer and construction in autumn next year, with the massive system expected to be online during 2026.

The project, called Vantaa Energy Cavern Thermal Energy Storage (VECTES), will involve caverns around 60 metres underground in bedrock. According to project overview documents produced by Vantaa, situating the water storage that far down means the ground water’s natural pressure will prevent it from evaporating, even at temperatures above its boiling point.

Four main caverns of around 220,000 cubic metres each, adding up to about a million cubic metres in total will make up the main storage chamber. The aim is to replace the use of natural gas for heating with the plant’s stored energy capacity equivalent to the annual heat consumption of an average-sized Finnish town. Thus, surplus heat from summer months can be stored and used in winter with solar, wind and geothermal energy as well as waste heat from buildings helping to feed it.

An environmental impact assessment (EIA) report, prepared by AFRY Finland, is expected to be published in October, with a public meeting set to be held shortly after that. AFRY will also be responsible for the plant’s main design, geotechnical and rock design, structural engineering and process engineering. AFRY, YIT and Vantaa Energy will work together to do other planning and implementation, including determining the target cost and incentive scheme.

Vantaa will make a decision on how to direct investment into the project and begin transitioning to implementation after the initial development phase. The contract awarded to YIT and AFRY is worth about €75 million (US$88.95 million), YIT said, with the development phase of that worth about €1.6 million. An implementation phase contract is expected to be signed in Autumn 2022 ahead of construction starting.

Vantaa Energy is targeting carbon neutrality by 2030, with an interim target of phasing out fossil fuels by 2026. The VECTES project, which should help reduce the utility’s peak load in winter months, is considered the most important step towards these goals. Vantaa said it can end the use of coal in 2022, seven years ahead of Finland’s national policy target, as well as phasing out the burning of peat during this year thanks to a bio-power plant, again, much earlier than Finland’s national goal of reducing peat-based heating by at least 50% by 2030.

“The seasonal heat storage is a key part of our innovative investment programme that combines new technological solutions and allows us to phase out fossil fuels in energy production as quickly as possible,” Vantaa Energy managing director Jukka Toivonen said.

“We chose the flexible alliance model for the implementation of the demanding design and construction project, and I am convinced that together with our partners YIT and AFRY, we will be able to implement the project efficiently so that the outcome will – at the minimum – meet the strict goals set for it.”

Vantaa is also considering a 10MW power-to-gas plant which would be commissioned in 2025 and produce carbon neutral synthetic methane produced from captured carbon dioxide and green hydrogen. The city utility signed a cooperation agreement with technology provider Wärtsilä for pre-engineering and development of the project, and Wärtsilä said in mid-June that the pair are planning “towards an investment decision”.

October 26, 2021
It’s the latest episode of the Solar Media Podcast, this time in collaboration with Solar Energy UK, as we look forward to COP26.

October 25, 2021
Companies in the battery storage sector attracted US$11.4 billion in corporate funding in the first nine months of 2021, a 363% rise on the same period of last year.

October 22, 2021
A gigawatt-scale factory producing lithium iron phosphate (LFP) batteries for the transport and stationary energy storage sectors could be built in Serbia, the first of its kind in Europe.