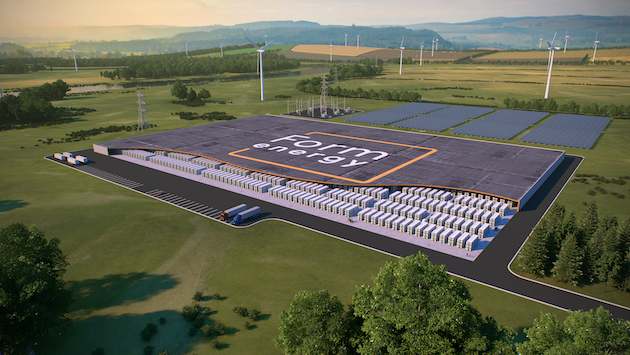 Startup Form Energy has finally made public the battery chemistry behind a technology that the company claims could make challenges of integrating renewable energy a thing of the past and outcompete fossil fuels.

Promising that it will make possible the cost-effective “multi-day” storage of energy, the disclosure has been eagerly awaited at least since Form Energy penned a contract to deploy a pilot 1MW system with Minnesota utility company Great River Energy in May 2020.

Such a technology could make it very easy to store the variable output of solar and wind generators and use the energy as and when it is needed, practically making the use of fossil fuels obsolete. However the company has been keeping its technology under wraps until yesterday, when it also announced that is has underway a US$200 million Series D funding round, led by a US$25 million investment from steel and mining company ArcelorMittal.

“If we want to truly reach a clean energy future, we must have solutions in place to store low-cost but intermittent renewable energy over multiple days.”

In an April 2021 interview for the site, Jaramillo had been keen to talk about the company and its aims, but made clear the battery chemistry would not be discussed or revealed at that time.

It has now been disclosed that the company’s first commercial product is an iron-air chemistry battery. It can store and dispatch energy for up to 100 hours at a cost which is competitive with existing thermal power plants, and could be up to 10 times cheaper than lithium-ion, Form Energy claimed. The goal will be building large-scale multi-megawatt front-of-meter energy storage facilities, with equipment manufactured close to where the systems will be sited and using iron that can also be locally sourced.

According to a fact sheet supplied by the company, the basic principle is based around reversible oxidation (rusting) of iron. As the battery discharges, oxygen from the air turns metallic iron into rust. Then as it is charged, the rust is converted back into iron through the application of electrical current. The only thing emitted by this process is oxygen.

“It’s modular, safe, and can be sited anywhere in the grid. Our technology differs from other energy storage technologies in that it has a very low-cost of stored energy,” Jaramillo said.

He added that while the technology aims to store energy at a much, much lower cost than lithium-ion, the rechargeable iron-air battery is expected to be a complementary technology to lithium, rather than its competitor. Together, lithium and iron-air can create “low-cost, highly reliable renewable power plants and complete systems,” he claimed.

“Our technology is not a replacement for lithium-ion. Quite the opposite, in fact.”

A team of Form Energy experts wrote a Guest Blog for Energy-Storage.news a few months ago about how extreme weather events such as the winter storm in Texas which caused several days of power outages shows the need for this type of technology solution in the US and elsewhere, alongside a variety of other clean energy technologies. CEO Jaramillo reiterated in his exclusive comments to this site today how the ongoing experience of extreme weather makes it “more evident than ever that we need new cost-effective technologies capable of storing electricity for multiple days”.

“Our first commercial product, an iron-air battery, will have the ability to make renewable energy available when and where it’s needed, even during multiple days of extreme weather or grid outages,” he said.

“Iron-air batteries are the best solution to balance the multi-day variability of renewable energy due to their extremely low cost, safety, durability, and global scalability.”

While many have sought to tackle the problem of making variable renewable energy easier to use on the grid with flow batteries — which offer a rugged, long lifetime, non-degrading asset that stores energy for between six and 12 hours more cheaply than lithium-ion — Jaramillo pointed out that the Form iron-air battery is a static battery with solid electrolyte, not a flow battery which uses liquid.

Form Energy’s pilot project with Great River Energy, located in Cambridge, Minnesota, is expected to go online in late 2023, and Jaramillo said that his team are working to make wider deployment of the battery possible the following year. The latest US$200 million investment drive into the company builds upon a US$70 million Series C that was closed in November 2020 and a US$40 million Series B in 2019.

The CEO said that the involvement of ArcelorMittal, via the steel company’s XCarb innovation fund, is important strategically.

Form and ArcelorMittal have been working together to “define the specifications needed for iron as an input” to the battery technology, which the pair will continue doing, while the ability to use ArcelorMittal’s global supply chain to help scale up production of materials “in line with global demand for multi-day storage systems” was a key driver in the partnership, Jaramillo said.

This article has been amended from its original form to reflect that Form Energy's latest Series D funding round is currently underway, and has not closed, as was originally reported.