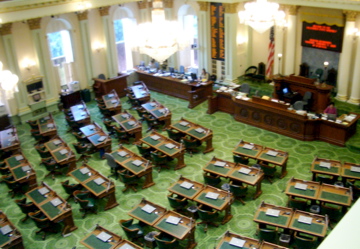 SB 700 was expected to come up for a vote in the California State Assembly (pictured) last week – but wasn’t.

Despite a bill to create a rebate programme for energy storage systems purchased in California being dropped from a recent round of legislative decision-making, the state’s industry still has a “bright future”, commentators have said.

Energy Storage Association vice president Matt Roberts and GTM Research analyst Brett Simon both told Energy-Storage.News this week that although Senate Bill 700 (SB 700) was taken off the voting agenda at a California Assembly meeting, where a ‘yes’ vote would’ve created a new policy pathway, California is set to continue its role as a leader in energy storage.

The bill is expected to return to the attention of lawmakers next year. A number of industry representatives have speculated on the reasons for it being removed from consideration, with one trade association claiming it could have stemmed from pressure from utilities. The trade group rep said utilities, as had been seen in solar in some parts of the US previously, wanted to own energy storage themselves and did not want to give consumers the opportunity to do it themselves, an accusation which was refuted by some officials.

“SB 700 was seeking to create an incentive for storage, which would act as a reliable runway going forward for the storage industry,” GTM’s Brett Simon said.

“I think it speaks volumes that the bill was not entirely struck down, and instead the bill may be up for a vote next year.”

According to Simon, while it wasn’t clear exactly why SB 700 failed this time around, he posited a theory that it may have something to do with California’s mammoth SGIP (Self-Generation Incentive Policy) scheme, which subsidises the cost of energy storage – if installed simultaneously with solar PV systems.

“I'd wager that part of the reason SB 700 was delayed is that the SGIP recently re-opened and had its budget doubled; it's entirely likely that California's legislature is waiting for the results of the new SGIP to better understand how to design incentive mechanisms for storage before going ahead of SB 700,” Simon said.

Similarly, Energy Storage Association vice president Matt Roberts – formerly the group’s executive director but now in the VP role after the recent appointment of regulatory and industry veteran Kelly Speakes-Backman as the group’s first ever CEO – said that the bill was certainly not dead in the water.

“While SB700 did not succeed in this legislative session, it is still under consideration by legislators in the state, and the impending study will undoubtedly produce results that demonstrate the value of energy storage in creating a more flexible, resilient, and sustainable grid,” Roberts said.

Both Roberts and Simon paid tribute to the extent that California has pushed ahead already in deploying energy storage systems and putting together a market and policy framework to support the technology.

“California has been a leader in the continued expansion of energy storage, and has helped to fuel the growth of a global industry,” Matt Roberts said.

“California is certainly the most forward thinking state in terms of building a storage market, evidence by both the AB 2514 storage mandate, programmess like the (Preferred Resources Pilot) PRP and (Local Capacity Requirements) LCR that seek to employ storage to help grid modernization, the Aliso Canyon procurements which evidence how quickly storage can be employed to solve a major grid need and, of course, the SGIP which offers incentives for storage among other technologies,” Brett Simon added.

While the California industry had hoped for SB 700 to be successfully introduced, adding “market certainty” for those participating in the industry by such an incentive, the market would nonetheless enjoy a “bright future”, Simon said.

“I expect we'll see the bill return next session, and see likelihood that it will pass, as such a programme will help the state reach its aggressive energy goals.”