California’s energy emergency: ‘The answer is to build out more solar-charged batteries’ 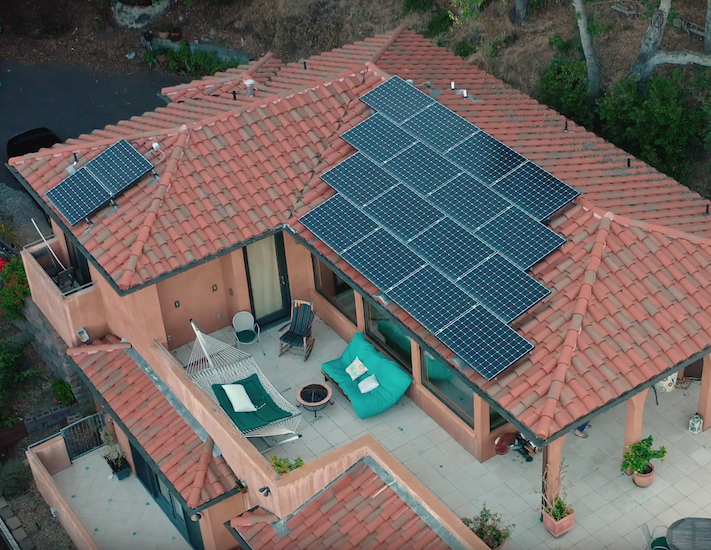 CAISO doesn’t have visibility behind-the-meter where many customers are already helping power their domestic loads with onsite solar (and batteries). Image: ElectrIQ Power.

“Solar-charged batteries” can help solve California’s energy shortage, with energy storage already playing a small but active role in mitigating the struggle to meet peak energy demand, according to the leadership of two trade associations based in the US state.

Instead, Del Chiaro said, solar energy did “exactly what solar energy can be relied upon to do: generate tons of electricity on hot sunny days to meet California’s growing need for energy. If not for all the solar power on the grid, the weekend’s outages would have been far longer and more widespread.”

“Moving beyond blame, what is needed is MORE solar energy combined with solar-charged batteries, not more fossil fuel power plants, to cover evening peak loads! The state is not doing enough on this front. That’s the problem.”

It has been widely reported that California has experienced problems meeting demand for electricity over the past few days, with grid operator CAISO issuing a proclamation of a State of Emergency on 14 August 2020.

The state was experiencing an Extreme Heat Event (defined as “widespread temperatures well in excess of 100 degrees throughout the state”), and CAISO said “significant demand and strain” had been put on California’s grid, while limiting energy imports from surrounding states.

Many had been quick to either politicise the event against the Governor Gavin Newsom or blame the growth in solar energy versus the retirement of fossil fuel plants. CAISO chief Steve Berberich said however in a press briefing on Monday that “renewables are really not a factor,” and that it was “simply a matter of raw capacity,” according to San Francisco Chronicle reporter J.D. Morris, who was on the call.

Berberich added that the situation called for “an overbuild of renewables and a fairly extensive deployment of batteries,” J.D. Morris reported on Twitter. With customers across networks asked to conserve energy over the following days, CAISO tweeted as this story was going to press that the Stage 2 Emergency declaration had been lifted. More rolling blackouts could be possible, however. 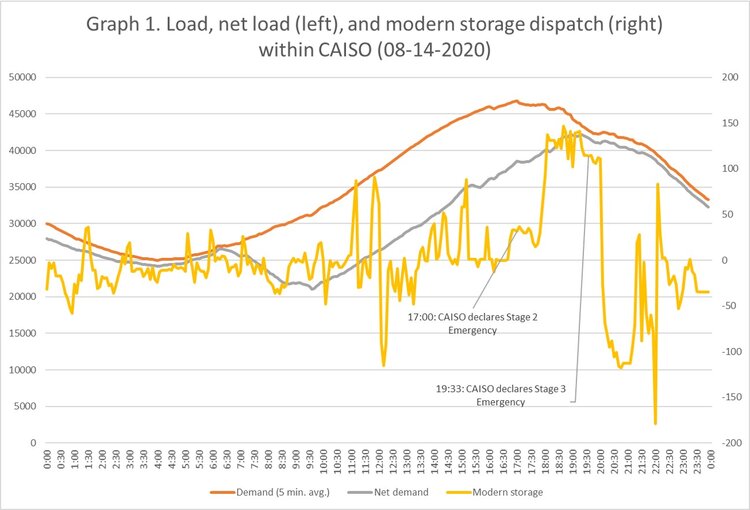 Storage resources dispatching during the State 2 Emergency after its 5pm declaration can be seen on the right hand side of the above graph, although their contribution begins to wane by around 8pm. Image: CESA.

Storage and solar already playing an active role despite outside perceptions

However, energy storage, being at an early stage of its deployment even in California, could only contribute a small amount of capacity to meet requirements, CESA said. The shortfall as of 17 August was between about 111MW to 4,400MW according to a CAISO statement, while only about 200MW of grid storage (excluding pumped hydro) is available so far.

According to the CESA statement from alliance head Alex Morris and his team, the reasons for the shortages could be varied and still need to be examined, but could include variations in load shapes due to the COVID-19 pandemic.

Compared to the same week in 2019, there was higher load consistently through the day last Friday that was likely to have been met with “low-cost renewable energy” which in normal times might have been available to charge energy storage resources. It is also possible, CESA said, that the grid operator may have underestimated its Resource Adequacy needs which are done a month ahead of time.

CALSSA’s Bernadette Del Chiaro said also that CAISO does not have visibility behind-the-meter, where some 9GW of solar generation sits, on customer rooftops. These customers could be powering their air conditioning – one of the biggest users of power domestically – through solar self-consumption.

So while it now looks as though demand peaks in the evening from around 6pm – when solar is no longer generating – in reality, even if the strain on the grid comes later in the day, the main peak of demand remains in the afternoon at around 3pm.

“Just like it did 20 years ago during the Enron scandal,” Del Chiaro said.

“Because CAISO only manages the centralised grid and no other energy regulator – the California Energy Commission (CEC) or California Public Utilities’ Commission (CPUC) – has stepped in to communicate the complete picture, the public is left thinking Californians use more electricity at 6pm than we do at 3pm. The problem with this is of course it makes it seem like solar energy is either not doing its job or it is irrelevant to today’s energy needs, when nothing could be further from the truth.”

Short-term reliance on gas is clear, solution requires mixture of long and short duration energy storage on the grid

CALSSA’s Bernadette Del Chiaro said it is undoubtedly true that California has an “evening electricity supply problem” partly due to the successful build-out of solar lowering overall demand and shifting the lower peak of demand to later in the evening.

However, the blame for the current problems lie with existing fossil fuel plants and operators failing to ramp up production to meet demand, while the solutions for the future should be based around “building out more solar-charged batteries, not more fossil plants”, the CALSSA executive director said.

Longer duration energy storage assets on the grid could also be an answer to meeting the peak further into the evening, the California Energy Storage Alliance statement said.

While battery storage played its “active role” during the late afternoon and early evening, after being called on to continuously discharge during the Stage 2 Emergency, by night-time at about 8pm battery storage resources “were depleted and required charging,” the Alliance said.

Meeting grid needs will likely best be done with a mixture of resources that “will include many types of storage with capabilities ranging from short duration, 4-hour duration, and longer-durations, which may include 6, 8, 10, and 12+ hour or even multi-day storage solutions,” CESA said.

While CESA also advocates for the expedited deployment of energy storage in California, the group also sees the importance of considering which natural gas plants should be retained in the short-term to meet dispatchable energy needs. These gas plants could be made more efficient and cleaner through hybridisation i.e. adding batteries.

Finally, also weighing in on the discussion was the Long Duration Energy Storage Association of California. Executive director Julia Prochnik said in a statement issued 17 August that California leaders must act on the critical need to deploy a balance of “long duration energy storage coupled with short duration storage, such as batteries”.

“As the state works to integrate even more intermittent renewable energy into the grid to reduce our reliance on fossil fuels and meet our climate goals, we need long duration energy storage to ensure we have enough in-state, clean and reliable energy to keep the lights on. Long duration storage is fundamental to ensuring reliability as we decarbonise the grid and replace natural gas generation.”