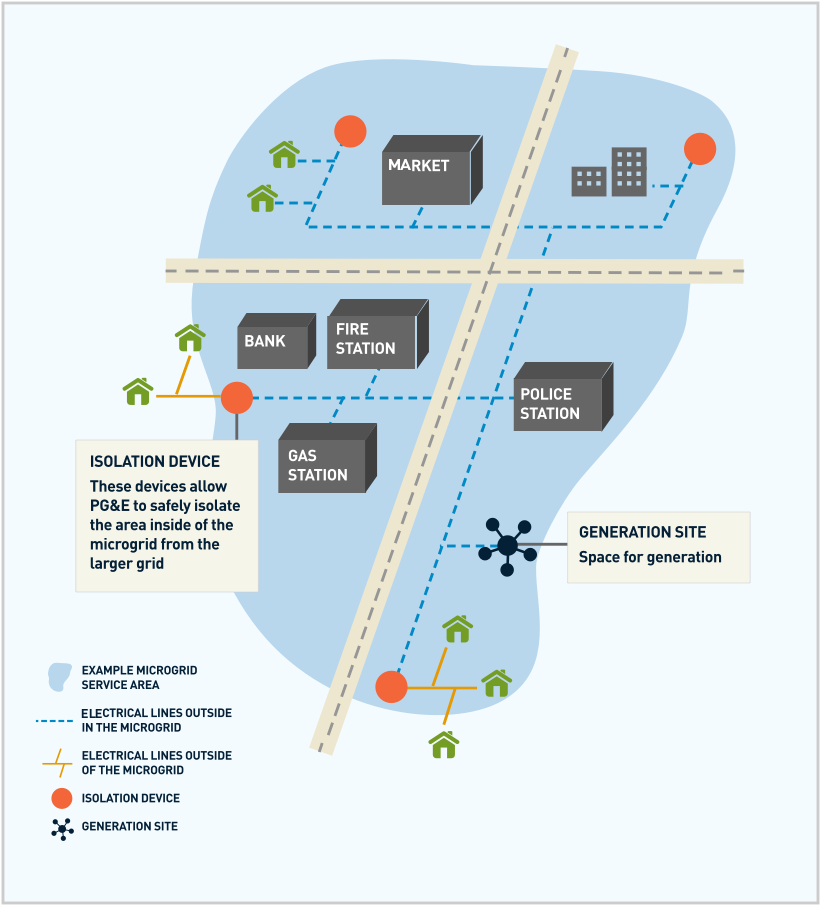 The basics of how a community microgrid built under the scheme would work to supply customers and critical facilities like hospitals in the event of outages or PSPS events. Image: PG&E.

Communities at risk of losing their electricity supply in the service area of California utility PG&E when disasters strike are being supported in developing their own microgrids through a new scheme announced by the utility this week.

PG&E, one of California’s three big investor-owned utility companies, is rolling out the Community Microgrid Enablement Program (CMEP), which will offer assistance for the design and deployment of microgrids which can be islanded and operate independently of the main grid operated by PG&E.

After devastating wildfires in the state, some of which were found to be caused by ageing overhead wire infrastructure and other equipment operated by the utility, PG&E enacted Public Safety Power Shutoff (PSPS) events which have seen whole areas of California deemed to be at-risk lose their electricity for extended periods.

Coupled with the threat of other extreme weather-related disasters and problems such as the heatwave which caused rolling outages last August as demand spiked, the CMEP is aimed at helping customers within “clearly defined electricity boundaries”, particularly in areas containing important facilities like hospitals and police and fire stations, to keep their power.

The utility will offer assistance in vetting possible microgrid projects, offer technical guidance and design support, as well as offsetting some of the costs of microgrid equipment such as controllers and isolation devices up to a cap of US$3 million and not including generation or storage facilities. Microgrids will remain in third-party ownership, but will be sited on the utilities’ transmission and distribution networks.

The programme has been approved through to the end of 2022, and projects must be located in High Fire Threat Districts, areas already impacted by PSPS events, or areas that are prone to outages. Areas with higher levels of renewable energy are also eligible due to the benefit emissions reduction offers to public health. Microgrids need to be interconnected to PG&E’s distribution network under its existing rules. Priority will be given to projects in areas disproportionately affected by multiple sources of pollution, on tribal lands, in areas with more than 50%  low-income customers receiving electric rate relief under a state programme and rural areas.

In a recent Guest Blog for this site, Catherine Von Burg, CEO of California-based battery energy storage manufacturer SimpliPhi Power, wrote of the vulnerabilities of being a utility customer at the end of a wire and how distributed energy storage can solve many of the resiliency issues that are starting to appear in regions of the US vulnerable to an ageing electric grid.

“By having energy available on-demand, not only when but also where it is needed most, distributed energy assets are able to skip the weakest link in our energy network – miles of poles and wires. The energy is generated and stored right where it is needed, creating critical reserves to protect people and their communities,” Von Burg wrote.

“When we install distributed assets like microgrids, rooftop solar, and on-site batteries, no one point of grid failure can put whole communities at risk of being disconnected, much less topple the entire system.”

In recognition of the need to facilitate microgrid development for customers of PG&E and the other two main investor-owned utilities in the state, Southern California Edison and San Diego Gas & Electric, their regulator, the California Public Utilities Commission (CPUC) in January adopted new rules, rates and tariffs designed to lower the barriers to their adoption and commercialisation.

The utilities were ordered to create “a renewable microgrid tariff that prevents cost shifting in their territories,” and to jointly develop a Microgrid Incentive Program which would have a US$200 million budget for funding clean energy microgrids with an emphasis on supporting vulnerable communities as well as exploring the relevant technologies to enable that.

Energy storage at the heart of the resiliency solution

PG&E issued a technical best practices guide for microgrids, prepared for the utility by Schatz Energy Research Center. It offers suggestions on microgrid architecture, the various requirements they will need to meet and how to set up and control them.

Battery storage is a “good candidate” for a microgrid’s Primary Grid-Forming Generator, one of the essential components for projects along with a Microgrid Islanding Point from the main grid, according to the guide’s Recommended Architecture suggestions.

The battery energy storage system (BESS) should have an inverter nameplate rating of at least three times greater than the PG&E distribution transformer inside the microgrid’s electrical boundary, PG&E recommends, while it is also important that the BESS — or other Primary Grid-Forming Generator — be capable of blackstarting the entire microgrid i.e. to fully energise it from a fully switched-off, de-energised state.

While microgrids could use synchronous generators at their heart, the guide notes that BESS technology makes seamless transitions to island mode possible, which synchronous thermal generators cannot do.

In the event of grid outages, the islanded microgrid can power both the airport and nearby Coast Guard facility in a project part-funded by the California Energy Commission. The Redwood Coast Airport microgrid is scheduled to go into operation this December.