US has gone past 1GWh of installed battery capacity, with help from utilities 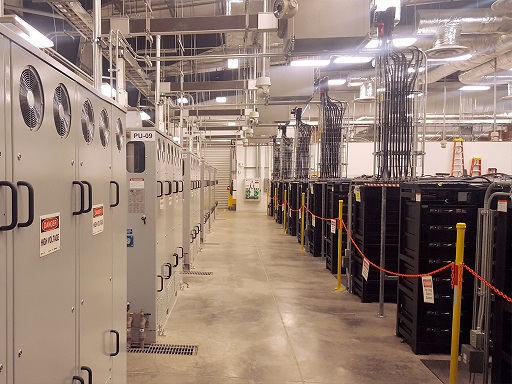 US utilities deployed more than 520MWh of energy storage on their networks in 2017, bringing the country’s cumulative installed capacity of grid-connected energy storage systems to over 1GWh, trade organisation Smart Electric Power Alliance (SEPA) has found.

SEPA, which considers its remit to be that of helping utilities to deploy clean and smart distributed energy solutions, publishes regular ‘Top 10’ lists ranking utilities in the US by the amount of solar deployed in their respective services areas, has this time out issued a 52-page report which can be found on the organisation’s website. As well as including rankings of energy storage utility deployment figures, both in watts and watts-per-customer, the report features in-depth analysis of the national picture state-by-state as well as at national or federal level.

From the top-down perspective, it appears durations of storage are increasing. Overall deployments in megawatts across the US rose by 5% from 2016 to 2017, while the corresponding megawatt-hour figure rose by 104%.

The two ‘Top 10’ tables for utility deployments are as follows: 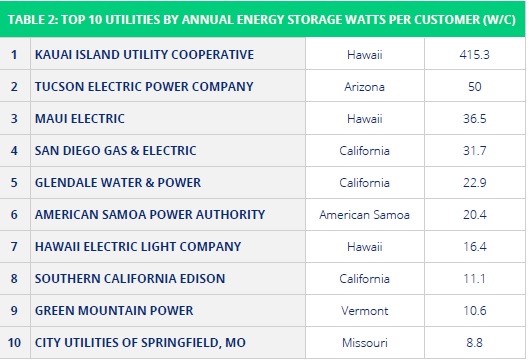 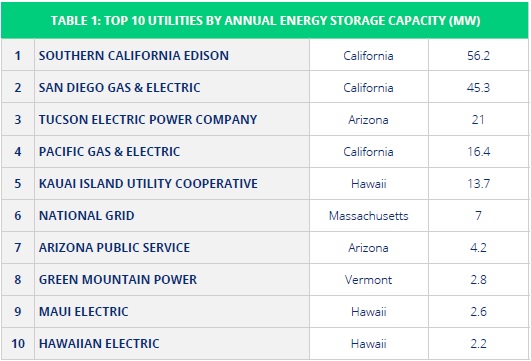 While it looks closely at existing trends and market drivers, SEPA also pinpointed the possible relevance of one policy move to the future direction of travel for the market. FERC Order 841, possibly the single biggest federal policy move in 2017, is currently under consideration by the Federal Energy Regulation Committee (FERC) and would enable energy storage resources to participate in wholesale markets. Order 841 seeks to identify and lower the barriers for doing so.

Systems must be technically capable of providing the capacity, energy and ancillary services that RTOs and ISOs require. They must also be dispatchable and capable of setting wholesale market clearing prices. Electricity sold from RTO/ISO markets into electric storage devices that are then sold back into markets must be sold at wholesale locational marginal price. Order 841 is also based on a recognition that energy storage systems are more useful and therefore also more economically valuable when they are able to ‘stack’ multiple applications.

Some interesting or surprising state-by-state trends have been identified:

The report from SEPA also goes into some detail around the various applications of energy storage from a technical and economic perspective as well as some of the ways batteries and other technologies have already been deployed or marketed to customers by utilities.

This includes Vermont utility Green Mountain Power’s offer of Tesla Powerwall units to customers through a low-cost subscription programme, whereby the utility shares use of the batteries to help balance the local grid. Others, such as Salt River Project and Jacksonville Electric Authority have begun offering customer rebates for a portion of the cost of energy storage systems. SEPA also said new Powerwall software by Tesla, available since May, can also allow storage batteries to take advantage of utility time-of-use rates for electricity, which SEPA called a potential market catalyst.

The comprehensive report also examines front-of-meter utility applications for energy storage and how much progress has been made in each area. Energy storage as a ‘non-wires alternative’ (NWA) to investment in transmission and distribution infrastructure such as substations, batteries to black start grids, storage to help integrate and mitigate peaks in solar production and the recommissioning of legacy lead acid battery systems with newer technologies are all looked at.

With the solar industry also an important part of SEPA’s remit there is also a deal of attention paid to the nascent solar-plus-storage utility space. The report highlights notable projects, including APS (Arizona Public Service) installing a 50MW / 135MWh battery with 65MW of solar from First Solar.

The project creates a dispatchable clean energy resource which can inject electricity into the grid during later afternoon to evening peaks from 3pm to 8pm. Other examples include a Salt River Project 20MW solar array with 10MW / 40MWh of batteries, backed with a long-term (20 year) PPA contract. Currently under development is a 10MW / 42MWh storage project in Texas which Vistra Energy is executing to capture curtailed or ‘clipped’ energy from a 180MW solar PV farm.

From there, SEPA moves onto a range of other topics including microgrids and “generation-agnostic storage” – in other words, while there is often an assumption that solar and storage are perfect companions, there is also a case for installing storage alongside natural gas, hydroelectric and of course wind.