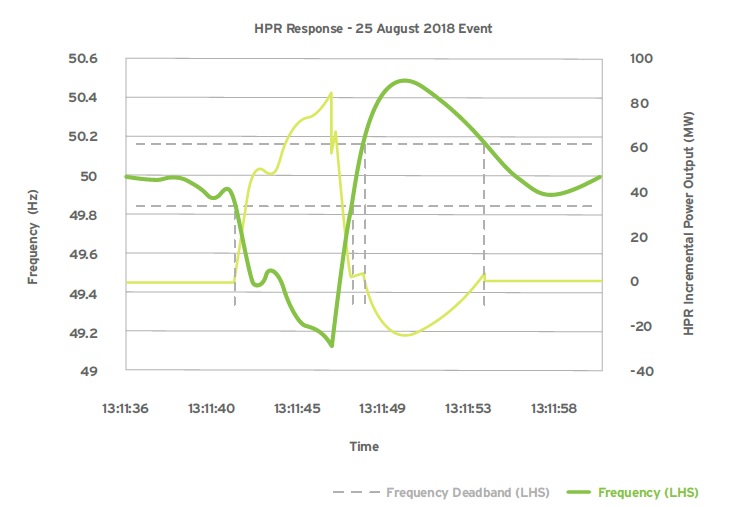 Hornsdale Power Reserve (HPR), the 129MWh battery energy storage system (BESS) deployed by Tesla and developer Neoen in South Australia in just 100 days, has been found to have had a positive impact on the local network.

The system went into operation in November 2017. Aurecon, an independent engineering and infrastructure advisory company, has issued a case study report based on HPR’s performance over the first 365 days of service.

It is the world’s largest lithium battery system in existence to date, although it is rapidly being caught up in size, mostly by big solar-plus-storage and gas peaker replacement projects around the world. In March this year, a 140MWh project was announced, also in South Australia by outgoing state Premier Jay Weatherill as he left office. HPR has a 100MW discharge capacity and shares a 275kV network connection point with Hornsdale Wind Farm (300MW).

Of the 100MW capacity, 70MW is reserved for system security services contracted to the South Australia government, while Neoen can use the remaining 30MW and 119MWh of storage capacity to participate in market opportunities.

Aurecon’s experts found HPR to have supplied numerous benefits to the system throughout the year, including removing the need for network upgrades and additional capacity. It also responded effectively to stress events on the local network.

In a blog supporting the report’s publication, Paul Gleeson, leader in energy at Aurecon, said the first year since HPR went into action has been an “undeniable success”.

“It has exceeded expectations and told us a significant amount about how we can integrate an increasing proportion of renewables into the National Electricity Market (NEM),” Gleeson wrote.

The first year of operation included a “large system security event” in August this year, when an interconnector between the grids of Queensland and New South Wales was tripped, islanding the Queensland region. Using fast frequency response (FFR) services, HPR was able to stabilise grid frequency to within the accepted range of 0.15Hz either side of 50Hz. Aurecon said HPR “performed as required” when that event occurred on 25 August, providing significant frequency support to all connected National Electricity Market regions.

HPR also participates in six further Frequency Control Ancillary Services (FCAS) markets for AEMO, including managing total deviation of frequency and Rate of Change of Frequency (RoCoF). From operational data provided, Aurecon said the system is providing “very rapid and precise response to FCAS regulation signals”. This is in particularly stark contrast to the much slower and less precise responses provided by steam turbines, which have been the traditional means of balancing this part of the network.

Aurecon said HPR has greatly increased the competitive dynamic of the FCAS markets, highlighting that in 2016 and 2017 FCAS constraints meant 35MW of capacity had to be kept aside, adding close to AU$40 million in regulation costs in that time.

In addition to frequency regulation, the system also participates in AEMO and ElectraNet’s System Integrity Protection Scheme (SIPS), which offers protection against the loss of the locally-sited Heywood Interconnector if multiple generators fail. It’s a direct response to the 2016 blackout which eventually inspired the deployment of HPR, and Aurecon said HPR plays a significant role in injecting energy into the network. It is required to discharge up to 100MW in under 150ms. If this step fails, the system is then used to help provide load shedding to the network.

Change and opportunities on the horizon and their emerging challenges

Aurecon’s authors did say however that many of the markets HPR is playing into were not designed for the fast-response energy storage technology. As such, the advisory group said a number of changes to regulations could help better recognise the services batteries can provide.

This could include the creation of a separate registration category for energy storage, including facilities co-located or paired with solar and wind, which would enable streamlined registration processes and the operation of combined assets. A better or more modern design of frameworks for frequency regulation markets would also be desirable, Aurecon said.

The advisory group also pinpointed a number of future opportunities or services markets the battery – and potentially others like it – could provide. As well as the aforementioned better design for FFR markets, other ancillary services markets could be redesigned with energy storage in mind, firming agreements could be made to go alongside power purchase agreement (PPA) contracts, transmission and distribution (T&D) network costs – and infrastructure buildout – could be avoided. Enabling renewable and distributed energy systems to make their power dispatchable would also be another potential wider use case for grid batteries, Aurecon said.

Aurecon has advised the South Australian government, AEMO and various network companies on technical issues relating to the HPR project including the state’s Energy Plan. Aimed at reducing dependence on grid connection to the state of Victoria, as fossil fuel generators are retired, Aurecon said batteries are an asset type that can help provide system security and stability to networks transitioning into an age of high renewable energy penetration.

“Partnering renewable energy with large-scale battery storage will be a key enabler for an affordable, reliable and sustainable energy future for Australia. HPR addresses a specific technical and market need in the South Australian network and creates a high-value option as part of the State’s Energy Plan,” Aurecon’s Paul Gleeson wrote.