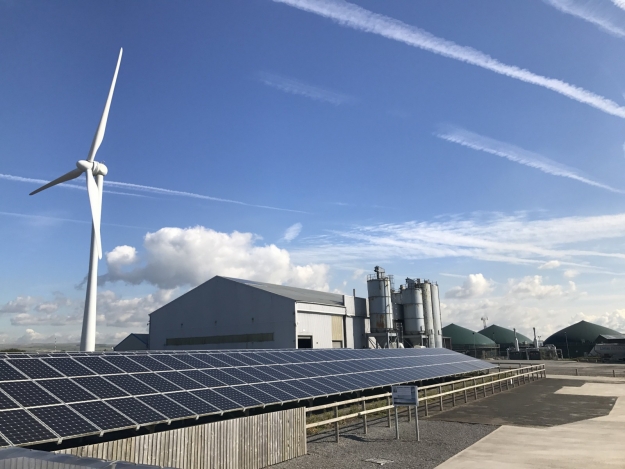 The 4MW Parc Stormy battery will be located alongside solar, wind and other generation technologies for future revenue opportunities. Image: Kiwi Power.

Kiwi Power is to finance and develop a battery storage project at a multi-technology renewable energy site in south Wales, where it will provide constant grid services availability to National Grid for two years in a first for the aggregator.

The 4MW Tesla battery will sit within a cluster of integrated clean technologies at Cenin Renewables’ Parc Stormy site in Bridgend, which hosts a low carbon cement facility, a 735kW solar installation, an anaerobic digestion plant and a wind turbine.

The battery, which will also be managed by KiWi Power, is the first of its size and revenue structure to be brought forward by the company. It will deliver firm frequency response (FFR) to National Grid after securing a contract in August’s monthly tender to provide 24-hour availability across each week of a two year period.

In order to meet the demands of this contract, the installation of the lithium-ion battery will be completed by 1 February 2018, with the contract lasting until 31 January 2020.

While this contract precludes the storage facility from performing grid charge avoidance, KiWi Power’s head of energy storage Stephan Marty said Cenin Renewables would be able to share in the immediate revenues as well as future opportunities.

“There's a monetary share of revenues and a financial benefit for the site, no question. In the future we would expect more opportunities once National Grid has changed its services. That site has a lot of onsite generation from renewable and non-renewable sources so we see in the future there's going to be a lot more opportunity to do more than ancillary services and the capacity market,” he told our UK sister site Clean Energy News.

The project has also been entered into pre-qualification for the capacity market – through which payments are made for generators to reserve some of their available capacity for dealing with stress events on the grid and to ensure reliability and security of supply to the grid – which could offer a revenue stream for the project from 2021/22.

‘Market willing to invest in spite of complicated structure’

According to planning documents, Parc Stormy was originally intended to use a 10MW battery from Alevo in one of two projects planned by KiWi Power. However this was altered by a submission in June to the 4MW Tesla system, just two months before the US arm of the Swiss battery maker filed for bankruptcy.

Martyn Popham, director of Cenin, said: “We are pleased KiWi chose to invest at our Parc Stormy site in Bridgend which is another important step in our goal to demonstrate that by integrating renewable generation on one site you can deliver a reliable sustainable power source whilst providing much needed local economic development.”

The project represents a first for KiWi Power in the financing and development of a battery storage facility of this size. Martyn explained that while the investment appetite remained high for projects like this, changes to embedded benefits, National Grid services and derating for batteries in the capacity market had caused uncertainty in the market.

However, he added: “We have investors in this project ourselves. It is a complicated structure but the market in general is willing to invest in projects like this so we don’t have a problem finding investment at the moment. It's more the uncertainty that comes up but it is possible to finance it.”

The company has now begun an extensive roll-out of similar batteries across the UK within the commercial and industrial (C&I) sectors.

KiWi says it has already invested heavily in battery technology which will augment its existing DSR capability and significantly improve customers’ energy management in a cost-effective and environmentally friendly way.

Yoav Zingher, chief executive of KiWi Power, said: “KiWi Power is delighted to bring the benefits of battery technology to high energy users without them having to invest in the battery. This is a major first not just for us at KiWi but for the UK energy sector as a whole.

“The UK is slowly waking up to the potential of flexibility and battery energy storage’s role in that. By applying demand side response (DSR) techniques widely used elsewhere in the world, the UK could save nearly 10GW of demand – roughly equivalent to three Hinkley Point C nuclear power stations.”