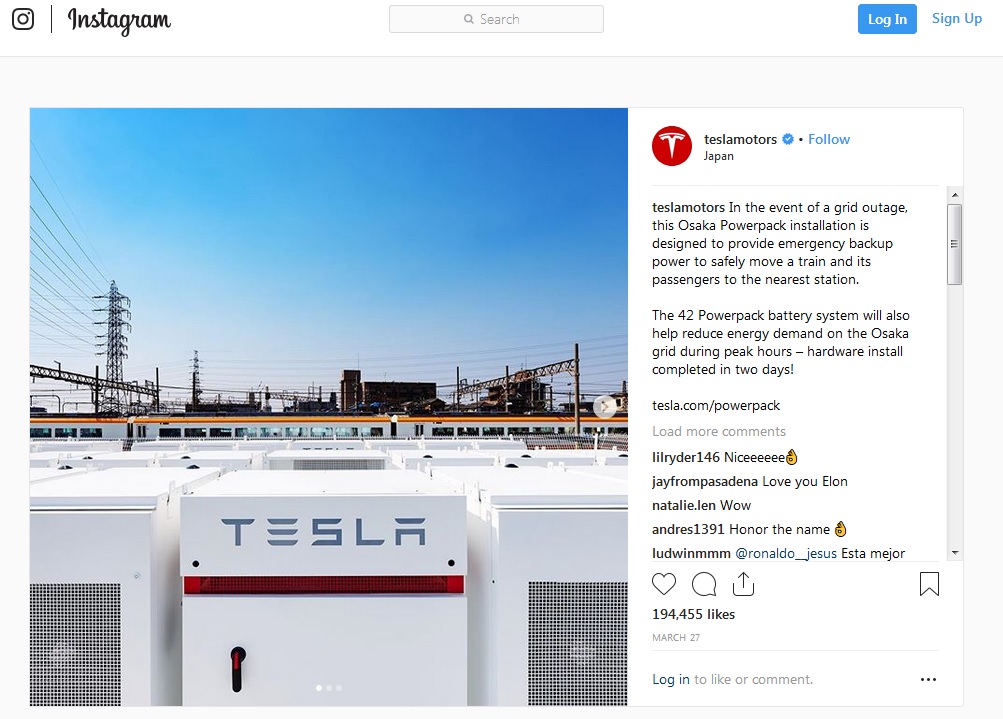 Tesla tweeted out and Instagrammed a picture of the installation in Osaka, Japan. Image: Tesla via Instagram.

A Tesla Powerpack energy storage system with 7MWh capacity has been deployed for a train company in Japan, adding backup power capabilities to trains and adding the system to an ongoing virtual power plant project.

Tesla tweeted and put out a post on Instagram claiming that the project, to install a grid-scale battery energy storage system (BESS) at a train station in Osaka, west Japan, had been executed in just two days. Incidentally, Osaka is the Japanese city where Tesla’s battery Gigafactory and PV production partner Panasonic is headquartered, as well as the government National Laboratory for Advanced Energy Storage Technologies (NLAB) and its test centre.

Tesla confirmed today to Energy-Storage.news that rail operator Kintetsu is using the system to make sure that in the event of power outages, potentially caused by natural disasters to which Japan is sometimes subjected to, the 42 connected Powerpacks can keep a train moving for up to 30 minutes, or move trains on multiple lines for shorter (split) periods.

The system will also be used to reduce peak load on the grid, while also being added to regional power company Kansai Electric Power’s virtual power plant (VPP) demonstrator project, one of two nationally-funded drives to assess the technology.

Kansai Electric Power (not to be confused with Korea’s national utility, also abbreviated to KEPCO), joined the earliest demonstrations in 2016 and then applied successfully for further support from the government Ministry of Economy, Trade and Industry (METI) and its Natural Resources and Energy Agency for continuing the VPP project in Imperial year Heisei 30 (2019).

After proving the basic controls would work in 2016, 2017 focused on the use of the VPP to adjust grid frequency, the project in 2018 moved on to the next phase: adding new layers of value and functionality to the VPP, a KEPCO press release in May 2018 stated. Both VPP initiatives are part of the government’s Sustainable open Innovation Initiative (SoII), which seeks to promote progress in everything from Zero Energy Buildings to supporting global start-up ecosystems and microgrid development.

A Kintetsu press release put the size of the Tesla system at 4,200kW / 7,098kWh. The company gave the full operational start date at the beginning of this week, 1 April. It is connected to a substation at Higashi Hanazono, on Kintetsu’s Nara Line service. The battery system can be charged and discharged remotely, either for helping to level the peak load on the local network, both for Kintetsu and for the VPP, as well as in times of blackout or emergencies as needed.

Tesla’s Powerpack system, as promoted to the Japanese market on its website, uses DC-DC converters. Each unit contains 16 battery modules and integrated dual coolant system for managing temperature, which along with other manufacturing processes of the Powerpack leans on Tesla’s experience and technology from its Model S EV.

This week, Energy-Storage.news heard from UK energy storage company Moixa that various inflection points are driving forward the market for battery energy storage in Japan, with the British company exporting its optimisation, control and aggregation software through a partnership with trading company ITOCHU. These inflection points include an ongoing process of energy market liberalisation, deregulation and reform which are informing many of the bigger picture decisions and market dynamics.