Spain’s 2.5GW storage target a positive step but ‘challenging to get there’ 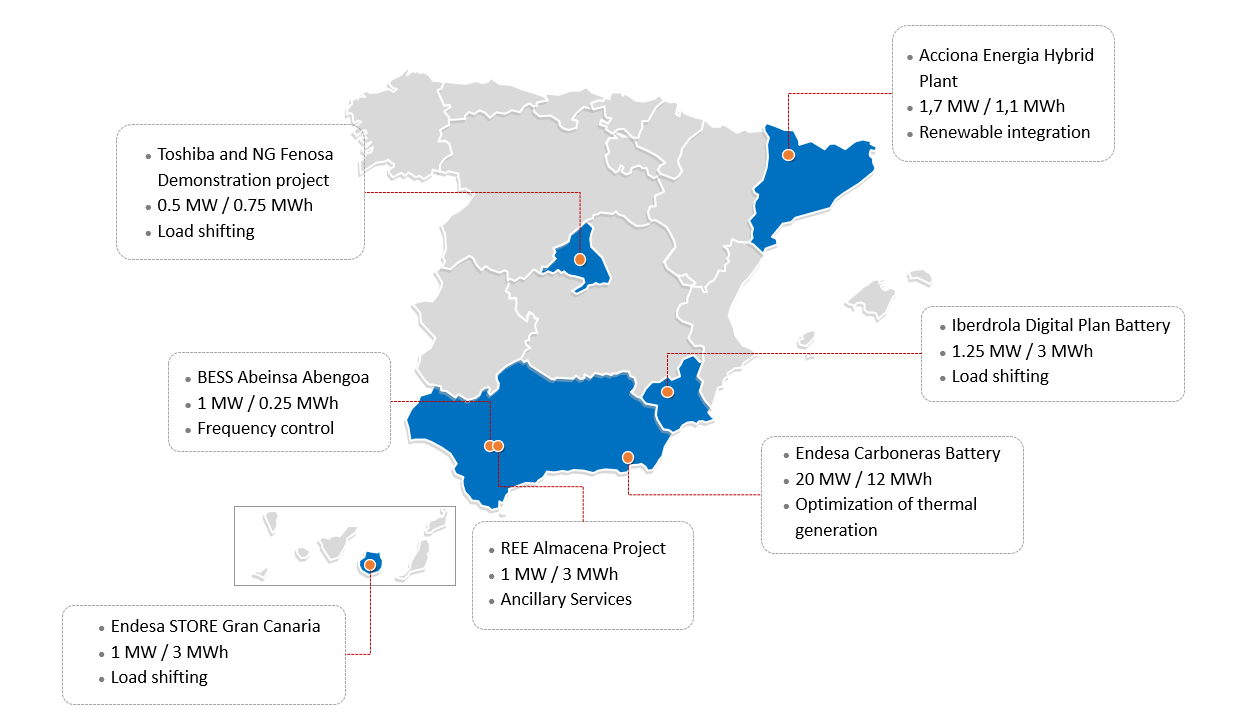 Spain has a long way to go to begin meeting the 2.5GW by 2030 target. Image: Clean Horizon.

It is likely Spain will introduce “important regulatory changes in the coming years” to enable the European country to meet a national target of deploying 2.5GW of energy storage by 2030, analysts at consultancy firm Clean Horizon have said.

While all Member States of the European Union have released their National Energy and Climate Plan, outlining how each country will help the Union achieve a decarbonised power system, Spain is the only one so far to have set a deployment target for energy storage.

Clean Horizon analyst Tanguy Poirot told Energy-Storage.news that the target is “pretty huge” and also “pretty much impossible to have with the current market conditions.” Therefore, Spain is likely to implement regulatory changes to enable rapid progress and earlier this year opened a public consultation process.

Public entities were asked to propose the roles energy storage could play in the electricity system and what sort of changes might be needed to promote its participation as well as make it attractive for investors, Poirot said. While the 2.5GW target – which excludes pumped hydro – is a challenging number, the analyst said Clean Horizon “really witness a will from the Spanish government to promote storage and to reach this target”.

Clean Horizon responded in late June to that consultation with its own suggestions and comments. Head of market analysis Corentin Baschet told Energy-storage.news that his team’s input was based partly on following examples of countries where storage has been successfully deployed such as Germany, the UK and France.

In the UK, for example, Baschet said, “What has been deployed in the market is close to what the market needs,” adding that he is not keen on the business case for energy storage relying on subsidies, and that the best way forward would be to alter existing electricity market structures in order to allow energy storage to participate as appropriate.

Conversely, in the US, seven states now have energy storage deployment targets in place. Baschet said that unlike the US market, which is very utility-driven and not often open to third parties, targets serve as a “long-term vision”.

“In the US they have these kinds of targets or mandates, you have utilities making tenders for battery storage systems and you have to make a bid – or there will be subsidies. If you look at Massachusetts, there are specific frameworks for storage – there are a lot of different mechanisms like the Clean Peak Standard. But there’s not only the trajectory in the best case, you don’t only see the arrival point, you also see the way to get there,” Baschet said.

“On the Spanish auction, we’re saying it’s great to have an objective, but how do we get there? Because it has no specific subsidy or market open, it’s challenging.”

In its consultation response, Clean Horizon said that measures that could support energy storage in Spain included opening up system services to battery storage, with frequency regulation a prime example. There could also be a long-term capacity mechanism that includes a “green” element, such as has been launched in France recently, where Capacity Market contracts were handed to 253MW of energy storage projects, eligible to compete where fossil fuel generators were not.

Other applications that have been successful in other markets such as considering energy storage as an alternative to, or cost-reducing component of, transmission and distribution infrastructure upgrades were also suggested – recently seen proposed in both France (‘Project RINGO’) and Germany (‘NetzBooster’) where batteries in each case would act as virtual transmission lines.

The consultation also asked what role storage can play in encouraging citizens’ participation in the electricity sector and how the government could harness this potential. Clean Horizon said that aggregation of residential systems, forming virtual power plants, would be one side of this participation, while enabling higher shares of self-consumption of solar for households would be another.

Clean Horizon pointed out that Spain has a very high potential for solar PV development compared to much of the rest of Europe and anticipated that storage combined with photovoltaic plants will play a big role in the country’s energy future.

Read a more general discussion on energy storage in Spain and Portugal with Clean Horizon, here.