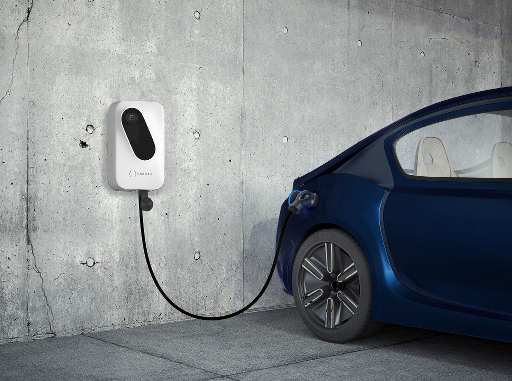 Germany’s sonnen introduced a scheme a while back in which customers pay a flat, reduced rate for their electricity each month while the company aggregate their batteries together to benefit the grid – and now the offer has been extended to electric vehicle owners.

The freshly announced ‘sonnenCharger’ is aimed at maximising the opportunity to charge EVs with clean, solar-generated electricity, while enabling sonnen to connect their batteries into a ‘virtual power plant’, turning them into a flexible load on the grid.

Initially launching in Germany, where the company first launched SonnenCommunity back in 2015, the vehicle-linked devices will also feed into the sonnenCommunity. The peer-to-peer ‘energy sharing’ network now incorporates ‘sonnenFlat’ the solar-plus-storage ‘flat-rate’ plan applicable to sonnenCharger.

If a residential customer does not have enough energy stored in their battery from their own solar-plus-storage system to charge their car, they can dip into the sonnenCommunity pool and draw excess power generated and stored by their neighbours, via the grid. Conversely, at times of surplus the power they feed into their own EV or solar home battery can benefit the wider network.

“With our pool of sonnenBatteries, we are already connecting thousands of energy storage systems into the world's largest virtual power plant of its kind. With the sonnenCharger, we can now also bring electric vehicles into the system, offering benefits to both utilities and consumers alike,” sonnen’s director for sales and marketing, Philipp Schröder, said.

“E-mobility can only succeed if it becomes an active part of the energy system. Many local power grids are not set up to accommodate the increasing number of electric cars. Instead of spending millions for installing bigger and bigger cables, we are offering a sustainable solution that integrates electric cars into the grid to intelligently control their charging and reduce the strain on distribution grids,” added Schröder.

The app that manages the charger can either be optimised to charge quickly or to draw the maximum self-generated PV power from the system. Sonnen claims that at present, each of the 8,000 or so customers in its sonnenCommunity receive 8,000kWh of ‘free’ electricity a year. Based on average household consumption of 5,000kWh a year in Germany, this equates to around 3,000kWh which could be used to power an EV – equivalent to around 15,000-17,000km of driving. SonnenCharger begins shipping in the second quarter of this year, offering 22kW Type 2 charger and is offered for free to customers of sonnenCommunity that subscribe to the sonnenFlat 8000 programme.

From initial pilots which began to gather pace from around 2015, the virtual power plant idea is beginning to capture imagination around the world. Projects are up and running in numerous countries from Canada to Japan, with prominent players that include Sunverge, Stem and Panasonic, while Tesla recently won a contract in South Australia for a programme that could deploy 50,000 residential systems over four years. Meanwhile, other providers of both energy storage and e-mobility products and services have launched numerous vehicle-to-grid trials and schemes that seek to leverage the synergies between electric mobility and renewables, with Nissan and Renault prominent examples among them.

Sonnen recently launched a type of sonnenCommunity offering in the US, through a deal with homebuilder Mandalay Homes in Arizona. However, it is understood current regulations in the US prevent the company from a full launch of the business model as it is in Germany, with the Mandalay deal only possible through a master planning-type arrangement with local utilities, grid and regulatory representatives. As with other areas of regulation and policy around energy storage, many of these rules could be set for overhaul in the coming years. Individual state authorities such as California's transmission system operator CAISO have made moves to further enable the technology, while at a national level FERC is seeking to allow energy storage to participate in wholesale electricity markets.

Read 'Blockchain in action: stabilising the grid in Germany and the Netherlands', a case study by sonnen's head of e-services, Jean-Baptiste Cornefert, here.