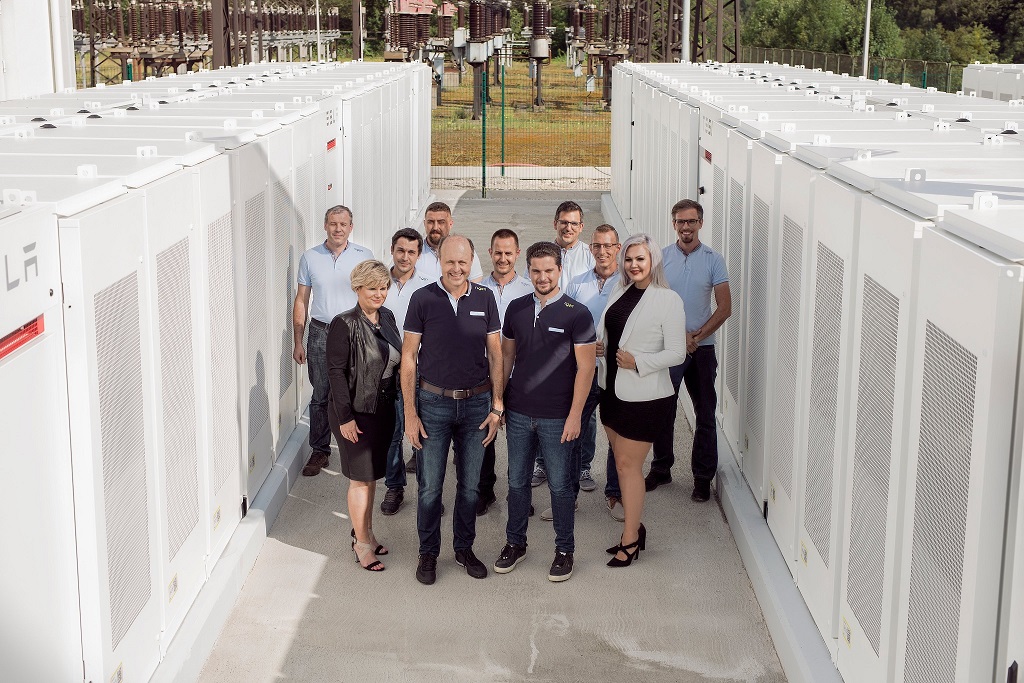 NGEN leadership team at the project in Jelenice, Slovenia. Image: NGEN via Twitter.

NGEN, a developer based in Slovenia, has celebrated the installation of a 22MWh grid-scale battery energy storage system (ESS) supplied by Tesla in what is thought to be the product's first deployment in the Balkans.

The company tweeted that an official opening event had taken place on 10 October for the battery, which is claimed to also currently be the largest Tesla Powerpack battery system in Europe, although not the largest ESS project on the continent by any provider.

Company executive, investor Damien Merlak said via Twitter that the system is 12.6MW / 22MWh and required EU15 (US$16.51) million investment. NGEN's official twitter account also then said there will be “more to come in 2020”. Tesla sales representative for the region [NAME REDACTED] then tweeted that the system can charge at 0.5C and store energy for two hours, although owing to Tesla's company policy of preferring employees to never be publicly recognised in any way, the representative deleted his tweets and asked this website to remove his name from this article after publication.

Energy-storage.news emailed NGEN to request confirmation and for more information this morning, receiving confirmation that information provided has been accurate, while the site also got a promise from NGEN to speak in more depth with the company in the near future from the company's leadership team.

In the meantime, regional news outlet Balkan Green Energy News offered a brief report on the project, which is in Jesenice, north-west Slovenia. The site reported that the battery energy storage system (BESS) will be used to balance grid frequency in the area and could help integrate much larger shares of renewable energy onto the grid, also reporting that NGEN said its next system will be constructed in Slovenia within eight months.

The Balkan Green Energy article also said NGEN is seeking to also assist others in executing their own ESS projects, which could see NGEN installing and operating plants as well as providing software and offering technical assistance.

The Jelenice project may also end up being one of the final really large Tesla projects to use the Powerpack at grid-scale, with the company having recently launched Megapack, which is a modular system solution available in 3MWh 'blocks' and intended for utility use.

16 October 2019: Ths article has been amended from its original form to remove the name of a Tesla sales representative involved in the deal owing to Tesla internal company policy – Energy-Storage.news has reluctantly removed the name and reference to tweets – which were publicly available.