The Werne battery system will be virtually coupled with another 45MW unit at a power plant in Lingen, also in development, and existing run-of-river hydropower facilities along the river Mosel, as Energy-Storage.news wrote when the project was announced last year.

A press spokesperson for RWE said the Werne unit will start commercial operation by the end of November 2022 and the plan is still for it primarily provide grid frequency services. The main grid frequency services market in West Europe is Frequency Containment Reserve (FCR). The BESS units will also be used to optimise the operation of the hydropower facilities.

At the time of the announcement, RWE told Enegy-Storage.news that the two BESS units would have a combined energy capacity of 128MWh.

The spokesperson did not say when the Lingen unit is expected to come online. Energy-Storage.news has asked for further clarification and will update the story when a response is received.

RWE used its proprietary enclosure design and will apply its own Energy Management System to manage the safe and reliable operation of the BESS units. The two BESS units are made up of 420 lithium-ion battery racks in 47 overseas shipping containers, using battery cells from CATL, the spokesperson added.

“With a combined output of 117 MW the combined battery storage system will be one of the greatest in Germany,” they said.

Though the 72MW Werne unit alone may be the largest in the country when it comes online in November. The largest operational facility that Energy-Storage.news is aware of is the 60MW/52MWh Lausitz Battery Energy Storage System, attached to a coal plant operated by power plant operator and utility LEAG.

The latest issue of our quarterly journal, PV Tech Power (Vol.32) is out now and includes a close look at Germany’s possible resurgence as a major utility-scale energy storage market. Learn more here.

February 1, 2023
Austria-based utility Verbund is targeting 1GW of battery storage by 2030, it revealed in a ribbon-cutting ceremony for a recent project in Bavaria, Germany. 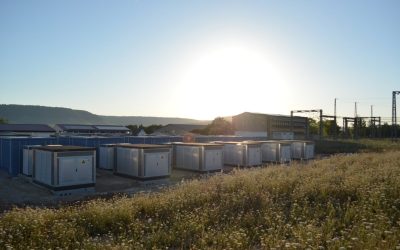 January 16, 2023
A pair of 20.7MW battery energy storage systems have been added to the electricity grid in Bavaria, Germany, by Austria-based utility Verbund and developers ECO STOR and Kyon Energy.