The EStor-Lux battery site in south Belgium fully launched commercial activity in December and has successfully participated in grid frequency auctions, the consortium behind the project has said, with 16GW of balancing capacity provided so far.

Centrica Business Solutions is in charge of the optimisation and has had the system participate in most of the automatic Frequency Restoration Reserve (aFRR) auctions organised by Elia, the Belgian high-voltage transmission system operator. It claims the 480-module system has provided 16,000 MW of balancing capacity to Elia since launching.

The battery park in Bastogne is integrated in a virtual portfolio with other flexible capacity sources, the announcement on 18 February says. It claims it is the largest active battery site in Benelux in terms of storage capacity, although larger projects are following hot on its heels.

Two 25MW/100MWh systems are set to launch this year: one in Ruien launched by a Japanese-Belgian joint venture in Q4 2022 and one in Balen being developed by commodities trader Trafigura should also be completed this year. That pair are also among four new build battery projects totalling 130MW/540MWh awarded capacity market contracts by Elia last year through its newly introduced Capacity Remuneration Mechanism (CRM).

The consortium behind the Bastogne project is made up of investment groups SRIW, Ackermans & van Haaren, BEWATT, SOCOFE and SOFILUX, engineering and construction firm CFE and Belgian government development organisation IDELUX.

A cross-border platform to mutualise aFRR auctions across the continent is being created, Project PICASSO, which Energy-storage.news wrote about last year. It will enable continental European countries to share their balancing energy and has triggered reforms to allow storage to participate in the market in countries such as Belgium, France and Spain – elsewhere regulations still prevent it from joining.

France, Germany and Austria are set to launch the platform in the current quarter while Belgium, Italy, Switzerland, Czechia, Slovenia, Croatia, Romania and Bulgaria will join later this year. The bulk, though not all, of remaining EU countries are set to join in 2023/24. 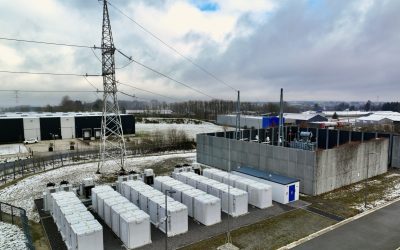