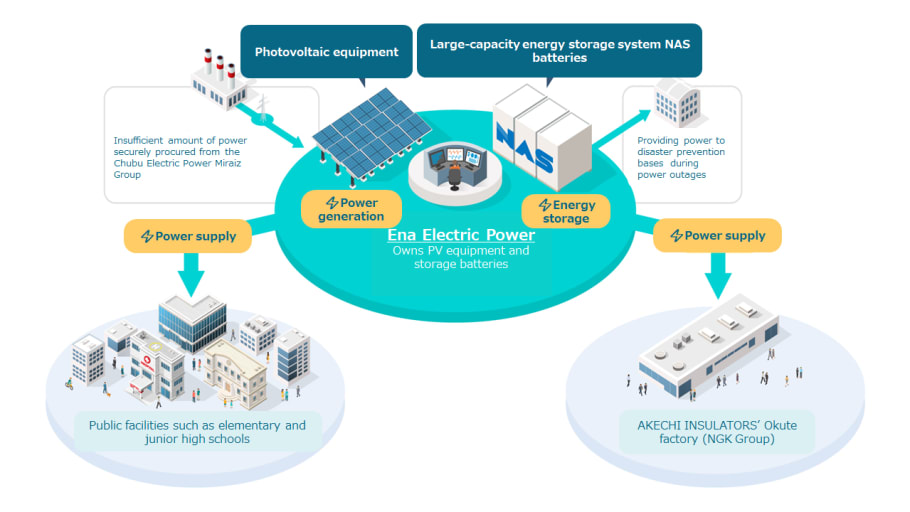 Ena Electric Power will be established this month and aims to begin electricity sales in April 2022. Located in Gifu Prefecture, near to NGK’s headquarters in Nagoya, Aichi Prefecture in central Japan, the new entity will install solar PV and NAS batteries on rooftops and idle land in the city. Power will be supplied to residential as well as industrial customers in the region.

As well as enabling high shares of renewable energy to be stored and integrated into the local network using NGK’s long-duration NAS batteries, the solar-plus-storage installations will be able to be utilised as an uninterrupted power source in the event of natural disaster.

Under the unsubsidised business model, NGK and its joint owners in the electric utility, Ena City and Chubu Electric Power Miraiz — the supply and retail arm of local transmission network operator and utility Chubu Electric Power — will install and own the systems in-house.

The launch comes as Japan’s electricity market continues to undergo a long process of reform and deregulation, leading to the unbundling of transmission and supply businesses at the big regional utilities like Chubu Electric Power, Tokyo Electric Power and others, as well as the launch of hundreds of new electric retail companies. At a national level, Japan has also committed to a policy of decarbonisation by 2050.

EnerVenue, a startup which last year launched a “go-to workhorse battery for most solar or wind-plus-storage applications” has signed a distribution agreement to take its technology to China and Hong Kong.

EnerVenue’s battery tech is based on a nickel-hydrogen chemistry adapted from the type used at the International Space Station, and launched last summer with US$12 million of funding behind it. The company claimed its solution is low-cost, could last about 30 years in the field or 30,000+ cycles and can operate in a range of temperatures from -40° to 60°C with a charge/discharge range of C/5 to 5C.

The company said earlier this month that it has signed a distribution agreement with Hong Kong public utility Towngas, which is launching its own zero carbon smart energy platform. EnerVenue said its batteries have been selected for an exclusive distribution partnership, where Towngas will deploy the American company’s energy storage systems (ESS) into its own projects and distribute them to its customers.

“EnerVenue has developed truly groundbreaking energy storage technology for the clean-tech revolution. We see its battery technology is remarkable due to the simplicity, durability, safety, and cost-efficiency of the unique solution they have developed,” Wong said.

NeoVolta’s NV14 comes with LFP energy storage output at 7.7kW and capacity at 14.4kWh, expandable to 24kWh with the addition of the company’s NV24 add-on. NeoVolta markets and sells its systems in California, where customers are increasingly looking to install equipment that can keep their critical loads running in the event that utility power is shut off.

The systems can already be integrated with backup generators and are compatible with AC and DC solar panels. The new technology now allows a backup generator’s 240V AC power output to be converted to DC and directly connected to the DC solar input of the NeoVolta system.

This can be done without any modification to the NV14 or NV24 devices and the company claimed it to be a cheaper option than stacking up additional batteries. NeoVolta filed a patent for the device at the beginning of March.

CEO Craig Evans is stepping down from his role at ESS Inc, currently the only provider of an all-iron electrolyte flow battery.

New CEO Eric Dresselhuys is the current chairman of renewable energy software group Enian as well as sitting on the board of directors of distributed energy platform company AutoGrid. He previously co-founded smart grid networking and data solutions company Silver Spring Networks at the beginning of the 21st century, before it was sold a decade and a half later to major US tech company Itron Inc.

“I am honoured to join ESS as its CEO. I believe that long-duration energy storage is one of the most important developments in our global effort to create a cleaner, more sustainable energy system,” Dresselhuys said.

“Eric recognises the enormous opportunity in pairing our long-duration storage solutions with renewable energy in a decarbonised world, and his decades-long commitment to a clean energy future aligns perfectly with the mission of ESS,” the company’s board chairman Michael Niggli said.