20 September 2017: Navarra in Northern Spain now plays host to the country’s first energy storage system integrated with a grid-connected wind farm, after a ceremony was held to inaugurate the plant.

One set of batteries will be fast-responding, with 1MW / 0.39MWh power and output respectively and the other with 0.7MW / 0.7MWh. The batteries will help to ensure power going to the grid is of the highest quality possible, while the potential use of the energy storage for providing ancillary services to the grid and shifting loads to reduce grid congestion will also be considered, as long as they are found to enhance the economic performance of the combined wind-plus-storage plant.

Acciona developed and delivered control software for the plant, while also creating modelling and simulation software for designing and optimising integrated wind farm-plus-energy storage projects while some power electronics was delivered by Ingeteam. The Barásoain Experimental Wind Park project has been supported with funding from the European Regional Development Fund (ERDF).

While solar-plus-storage has seemingly raced ahead, adding batteries to wind farms has started to gain traction across the world, with recent stories including the addition of battery energy storage to a 90MW wind power plant in the UK by ABB and the deployment of a 5MW / 5MWh system on the island of Martinique by Nidec ASI this summer.

After what the company, which makes energy storage devices based on abundantly found materials and recyclable plastics, described as a year of “major strategic redirection”, Redflow has shifted its production lines from Mexico to Thailand. The company has also explicitly begun targeting customers for whom it can replace lead acid batteries in the field in applications from telecommunications towers to off-grid residences. Last week Redflow said it had received a repeat order worth about US$600,000 from Hitech Solutions, which will use the flow batteries on remote sites in New Zealand.

Tech entrepreneur Hackett had taken over as CEO in September 2016 after previously serving as executive chairman. At that time, Redflow was signalling its intent to sell a flow battery system, the ZCell, into Australian households, a strategy it has since all-but abandoned. At the time, one analyst told Energy-Storage.News that it was “unlikely” flow batteries would be able to compete with lithium-ion in a residential setting.

Redflow’s chief operating officer (COO) Richard Aird, who has been with the company in various roles since 2009, has been promoted to CEO. The company said Aird has “the skills and expertise needed to drive the company as it starts manufacturing batteries in Thailand and implements cost downs in battery production”.

Meanwhile, Simon Hackett’s other role with the company, that of independent non-executive chairman, will be filled by Brett Johnson, a former general counsel with airline Qantas. Hackett will stay at the company in a “technology oversight” role.

26 September 2017: JLM, US maker of the Phazr ‘microstorage’ product, which attaches small lithium batteries to PV systems at individual panel level, has raised US$25 million in project financing.

The company launched Phazr at the beginning of this year, with the mini-systems able to either charge batteries directly from each PV panel or feed power into the grid, or even do both simultaneously. Since power generated from the PV system can either go into the battery or straight into the grid without passing through the battery, JLM claims overall cycle life of the batteries is boosted.

JLM CEO Farid Dibachi told Energy-Storage.News in August that he is targeting sales of 10,000 units per week. The US$25 million in project financing, announced by JLM yesterday, will be used to accelerate and scale-up the company’s activities in the commercial and industrial (C&I) space.

With the funding, JLM is looking to “finance deployment of energy services” and accelerate the rapid adoption of Phazr in the C&I market. JLM offers “energy-as-a-service” and loans as alternative ways for customers to pay for its systems. The company expects the funding to be fully committed by the third quarter of 2018. 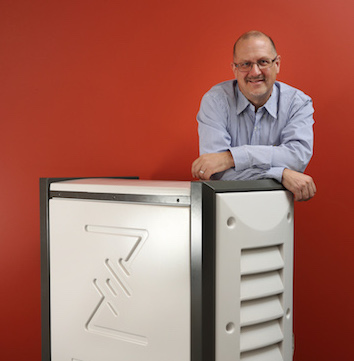