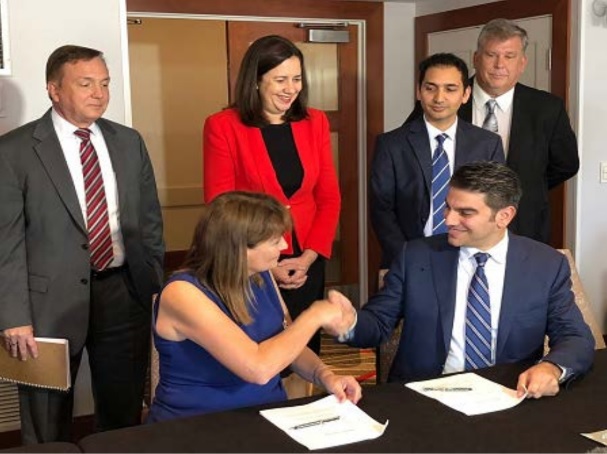 The signing ceremony, held at an event in Boston, USA, on 3 June 2018. Image: Magnis Resources.

Australia could be getting its first lithium-ion battery ‘Gigafactory’, with some progress made in the past few days for a facility proposed to be built in Queensland.

Imperium3, a consortium of five technology companies from around the world, is currently looking to build a large gigawatt-scale battery plant in New York. One of the consortium’s partners, ASX-listed Magnis Resources, said today that a fast-track process has been implemented for a similar facility in Woodstock, Townsville, Queensland.

Queensland’s state premier, Anastacia Palaszczuk, the Mayor of Townsville Jenny Hill and senior representatives of Imperium3 attended a ceremony in Boston, USA a couple of days ago, where documents fast-tracking the development were signed.

A feasibility study for the Townsville project has already begun, with Queensland’s state government committing AU$3.1 million (US$2.36 million) towards it. The study is expected to be completed this year and is considered to be vital for the project to go forwards. If completed, it could create 1,000 permanent jobs in the region.

“Queensland has long been the powerhouse of Australia. Now as we move towards our 50% renewable energy target, storage solutions are a vital part of enhancing our natural strengths in renewable generation,” Palaszczuk said.

“Storage is fundamental to making renewable energy reliable, and that’s why my Government has already committed more than AU$3 million towards assessing the feasibility of this project.”

“Today marks yet another milestone that has been achieved for Imperium3,” Corey Cooney, director of Imperium3 said.

“After months of negotiation with the Queensland government we will now be working toward securing stage 2 funding and completing our feasibility study.”

The existing consortium partners are led by Magnis Resources, which has a background in graphite and is now moving towards battery production. In addition to the New York and Queensland Gigafactories, which are each targeting 15GWh of production capacity, Magnis is also planning a 30GWh factory in North-Rhine Westphalia, Germany. Magnis said it has developed a lithium-ion battery design which uses no cobalt or nickel in the cathode, enabling cost reductions. The company is playing a central role in sourcing raw materials, components and technologies for the factories, as well as project development and management as the factories are built.

Magnis was already joined in the consortium by venture investor C4V, Boston Energy and Innovation, Eastman Kodak Group (which opened a New York battery test and development facility with NY BEST a while back) and contract manufacturer of electronics C&D Assembly.

The consortium’s roles will in most cases stretch out to all three factory plans. Siemens is apparently set to supply its digital enterprise platforms to the factories, playing what Magnis called a “major role in digitalisation and automation”.

It’s not the only proposed Gigafactory Siemens is working on. At the end of last month, start-up Northvolt, which is building a facility in Sweden, said Siemens will supply its digital enterprise expertise to that project too, joining the likes of lender the European Investment Bank (EIB) and tech provider ABB.