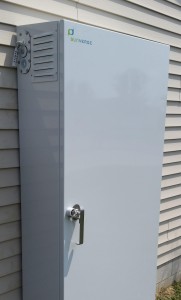 The guidelines could have called for mandatory outdoor installation for lithium-ion batteries. Image: Sunverge.

A set of guidelines for safely installing energy storage at customers’ houses will probably undergo significant revision from its current draft, which has been slammed as “not fit for purpose” by the head of the Australian Energy Storage Council.

Consumer protection and standards organisation Standards Australia had put out the draft of its guidelines in June, aimed at helping battery storage meet the national “AS/NZS 5139:2017 Electrical installations – safety of battery systems for use with power conversion equipment” standards.

The document proved extremely controversial among installers and other industry figures, who argued that proposed measures such as mandatory outdoor installation for ‘some’ batteries were unnecessary and could bring the industry to a halt.

Stakeholders were given around two months to get their comments in to Standards Australia, which announced at the end of last week that it received more than 3,000 responses to the draft. Standards Australia said many of those comments and responses pertained “to how systems should be installed in a residential context”.

The group acknowledged that the draft had proved to be contentious, referring to public policy tensions and said that owing to the volume and nature of the stakeholder responses, the draft process would be paused as authors took stock of those responses.

“Given the significant response to the draft standard, along with the fact that this is a new building technology with limited existing direction from governments, Standards Australia has offered to bring key stakeholders together to start a discussion and establish a framework through which these public policy tensions can be addressed,” a Standards Australia statement read.

Trade group and Clean Energy Council up in arms

Australian Energy Storage Council chief John Grimes, who has also served as the CEO of the Australian Solar Council since 2008, said in a news update emailed to members that the standard, which he blasted as “not fit for purpose”, is “no longer going to just be waived through,” due to those 3,000 stakeholder responses.

“Thank you to so many companies for providing comment,” Grimes said.

“Standards Australia have advised that they are pausing the development of the standard to allow fundamental questions around the nature and scope of the standard to be resolved. This is exactly what we have been calling for,” Grimes said, adding that those comments were necessary to “steer the process in the right direction”.

The day after the public consultation period ended on 15 August, Australia’s Clean Energy Council said that a requirement for batteries to be installed outside of homes “would add additional expense to install them for no benefit”.

“As long as home energy storage units meet strong international standards and are installed by an accredited professional to clear guidelines, requiring units to be installed outside of a house is unnecessarily restrictive,” Clean Energy Council executive general manager for installation integrity Sandy Atkins said.

“The introduction of a mandatory accreditation scheme, such as the one which covers the solar power industry, will ensure consumers are protected. Close to 1.7 million solar power systems have been installed across the country, and these products have a low rate of incidents compared to the broader electrical industry.”

Clean Energy Council is now working on an industry guide for battery energy storage safety. The group shared its consultation response to Standards Australia, which in brief stated that rigorous safety rules need to be applied for battery and storage system manufacturers, rather than passing the burden for safety assurances onto installers, which CEC argued means costs of those safety measures are passed onto consumers.

“Battery units should be required to meet appropriate international standards and be installed by an accredited installer to established, clearly defined guidelines. If batteries meet these standards, there should be no need for them to be installed in a separate external enclosure,” Clean Energy Council said.

Previously, Clean Energy Council chief Kane Thornton had warned in an interview with Energy-Storage.News that “overzealous” rules could “throw up unnecessary barriers and red tape” around the industry.