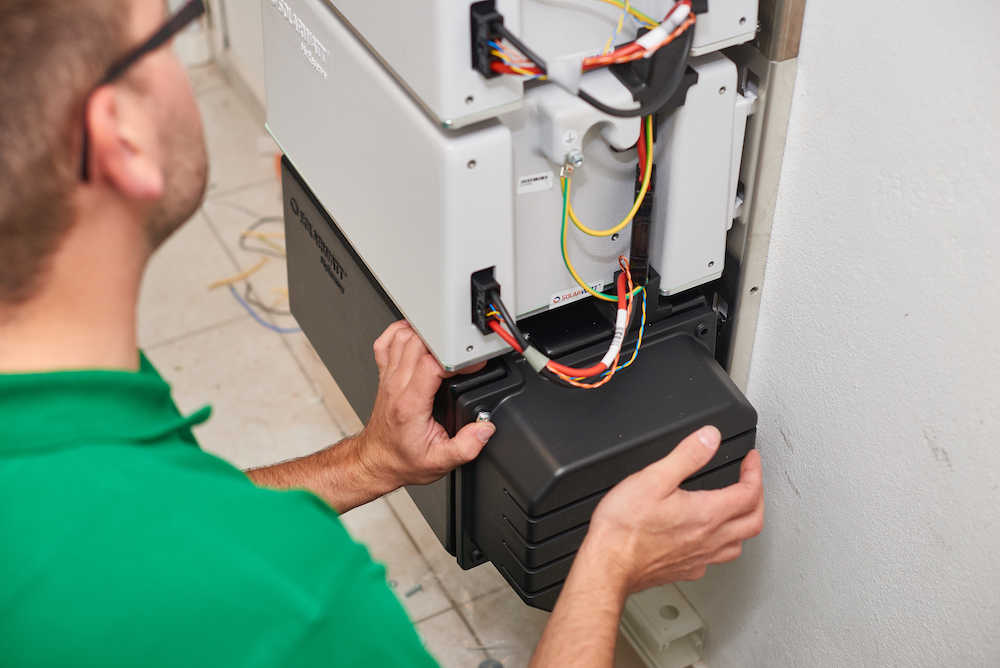 The number of home battery energy storage systems across Germany has already passed the 300,000 installation mark with average system capacity in 2020 about 8.5kWh. Image: Solarwatt.

Almost 70% of home solar PV in Germany comes with battery energy storage attached and the country’s residential storage market represented around 2.3GWh of installed capacity by the end of 2020.

According to newly-published figures, there are now more than 300,000 battery storage systems installed in German households, with the average installation representing around 8kWh of capacity in 2019, and about 8.5kWh in 2020. The statistics come from a report into the market by Energie Consulting, which was commissioned by Bunderserband Energiespeicher (BVES), the German energy storage association.

The consulting group found that around €660 million (US$785.55 million) of turnover for home batteries in 2019 grew by 60% to €1,100 million in 2020. The reason for this big upturn was attributed in part to the growth in interest in energy resilience, self-sufficiency and security and independence of supply at household level, which may, as in other countries, have been driven by the coronavirus pandemic. This effect was also felt, albeit to a lesser extent, at commercial scale.

The report’s author, Energie Consulting partner Jorg Blaurock, also said that additional impetus to the solar-plus-storage market was created by the government’s elimination of a 52GW cap on solar PV capacity to receive subsidies. Turnover for home battery storage in 2021 is estimated to reach €1,300 million.

Continued expansion of the PV market, as well as increasing demand for e-mobility are expected to create a “strong growth path” for the residential battery segment in 2021, with cumulative installs forecast to reach between 385,000 and as many as 445,000 units by the end of this year. There is also an exemption for larger capacity home systems of 30kWp and upwards from the EEG surcharge levied on all bill payers to pay for the country's energy transition, which again will benefit the sector.

Home thermal storage makes up an even bigger portion of the overall market for storage in Germany today, with turnover more than double the electrochemical battery segment in 2019 (€1,700 million), 2020 (€2,400 million) and expected for 2021 (€2,600 million). About 120,000 heat pumps were installed in 2020 and as many as 168,000 are predicted for 2021. A major driver has been the end of funding for replacement of oil heating with installations tied to this dynamic leading to about 30% of subsidised heat pump installations in 2020, while CO2 taxes being introduced this year, will be an added driver.

Home energy storage comprised roughly half of the entire industry’s turnover for 2020 according to Energie Consulting’s provisional figures. In an overall market worth about €7.1 billion in turnover, residential including thermal and battery storage brought in about €3,500 million, compared to €2,100 million in the utility-scale segment and about €1,300 million for commercial and industrial (C&I) installations, with a further €225 million turnover in research and development (R&D) projects.

The C&I segment was particularly hard-hit by the coronavirus pandemic’s effects, leading to about a 20% decline in sales between 2019 and 2020, with orders and projects postponed or cancelled. While in 2021, expected sales will not rebound to pre-pandemic levels, there will be an upturn from 2020 due to obligations to decarbonise industry and CO2 pricing as well as the growth in e-mobility.

C&I systems are being used in a “variety of ways,” including peak shaving (reducing the amount of  energy drawn from the grid at peak times), uninterruptible power supply for operations like manufacturing and data centres and emergency backup power. There is also interest in energy storage to optimise industrial processes and of course for electric vehicle charging infrastructure.

Meanwhile, large-scale battery storage systems turnover declined significantly from €200 million in 2019 to about €65 million in 2020 and this year Energie Consulting estimates turnover could be about €30 million. The pumped hydro storage segment however continues to see strong turnover, staying level at about €2,000 million each year.

Large-scale batteries have suffered in part from low levels of revenues available for supplying primary reserve to the grid: it has been said numerous times over the past couple of years that growth in battery storage installations for this application, which provides reserve power for balancing the grid and keeping it stable has depressed prices and this is expected to continue.

While the market was given some drive last year by the staging of Germany’s first so-called ‘innovation tender’ for renewable energy systems which can be smartly grid-integrated — several of which used energy storage in their bids — these systems have not yet been built and will begin construction this year. Also expected to add significantly to the installed base are the massive 'Gridbooster' projects which will see large-scale storage added to grid networks as virtual power lines, but again, this impact on sales will not be seen by the market until 2022.

From a survey of industry participants, it was found that regulatory obstacles continue to be the biggest market barriers for energy storage in Germany. Over half (51%) of respondents said regulatory framework is the main barrier, far more than any other of the options available, which included stability, market conditions and investment security (28%), raw material prices and production costs (14%) and demand development (just 8%).

This implies that while demand exists, energy storage development is finding it challenging for reasons that include a lack of clear regulatory definition for energy storage, a lengthy approval process, conditions for obtaining grid connections that lack sufficient measurement and billing concepts, and a lack of transparency in regulations.

Going forwards, while the introduction of a carbon tax has been welcomed, many consider the price to be too low and there is still a constraint on energy storage systems being allowed to value stack and offer multiple benefits through offered multiple applications. Regulatory institutions still have some way to go to catch up with industry on understanding the technological possibilities, the respondents said.

Nonetheless, Germany’s energy storage industry continued to grow overall in 2020 albeit with strong variations from segment to market segment. Energie Consulting is expecting sales for all segments to grow in 2021, driven by economic imperatives along with the sustainability and decarbonisation goals of industry growing simultaneously as energy storage technologies decline in costs.

Last year, in a Guest Blog for Energy-Storage.news, Valeska Gottke, senior expert for communications and markets at BVES, wrote that Germany's energy laws are written around the principles of three guiding “pillars” of the energy system: production, consumption and transport. At present, energy storage is defined as both production and consumption, when in fact it should have its own category and perhaps even be one of those guiding pillars in its own right, Gottke wrote. This lack of definition means that energy storage is economically disadvantaged in having to pay twice to use the grid both when taking power out of the network and when putting power into the network.

The problems of regulation are not limited to Germany: last year, analysis firm Wood Mackenzie Power & Renewables highlighted that while Europe is a global leader in deploying renewable energy, the role of energy storage is yet to be recognised in a way that matches the continent's continuing ambitions to transition to clean energy. Storage could help keep electricity prices stable, particularly as renewable energy sources such as wind and solar which are variable in nature continued to be added to Europe's grids, Wood Mackenzie analyst Rory McCarthy said. Despite Europe having a higher proportion of renewable energy generation than even the US or China, its global share of the energy storage market has declined in the past few years and the trend at present looks set to continue. 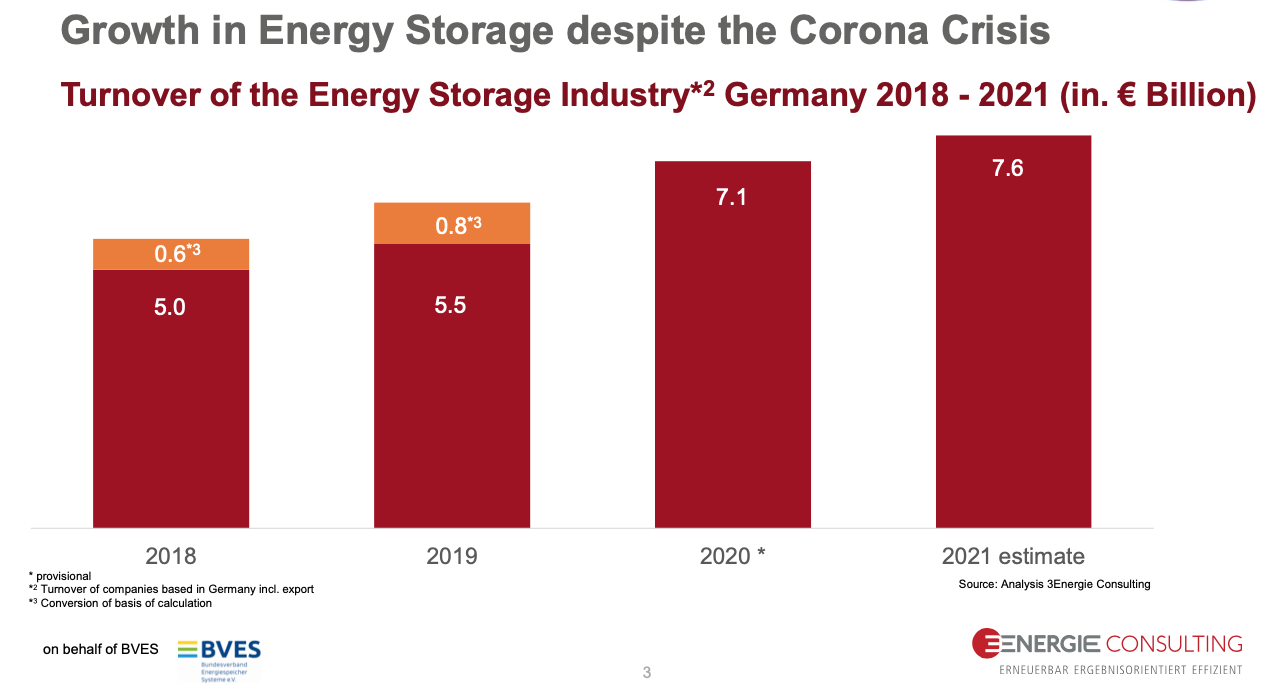 Hydrogen entering all segments but still at early stages

The use of hydrogen has grown in all market segments and at all scales in Germany, but the business cases for hydrogen still remain small, the report said. While it does expect this to strongly increase in the coming years, major projects “are still heavily subsidised”.

Entry to the utility sector for hydrogen is “imminent,” with legacy storage facilities being converted to be made hydrogen-ready and electrolysers are being planned to add flexibility to the energy system. In the commercial and industrial segment too, demand for electrolysers will rise sharply from 2022 onwards, due to the German national hydrogen strategy targeting 5GW of capacity by 2030 and the use of hydrogen in large-scale industry expected to take place.

The C&I hydrogen industry is expected to reach €130 million turnover this year, a modest rise on €120 million in 2019 and €110 million provisionally expected for 2020. Meanwhile the “first hydrogen-based energy concepts for household applications” have recently emerged and increased growth is expected there in the coming years.

Germany’s advocates for decarbonisation have long spoken of the need for ’sector coupling’ i.e. pairing energy sector power use with heating and transport applications and this use of hydrogen is a sign of that concept entering the end-customer market, the report said. Nonetheless, for the most part, hydrogen remains largely in the realm of R&D and flagship or demonstration projects.