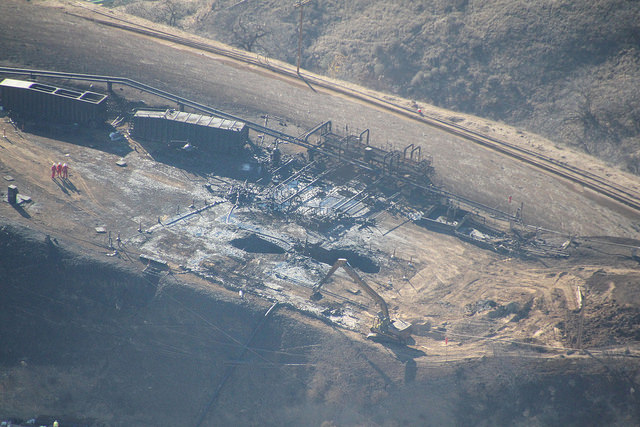 The direct impact of a gas leak at Aliso Canyon in 2015 in many ways provided an immediate early impetus for solar-plus-storage in California, but the gauntlet has been taken up state-wide. Image: Flickr / Earthworks.

Los Angeles Department of Water and Power (LADWP) last week approved power purchase agreements for what is thought to be the cheapest solar-plus-storage project so far in the US.

The two-stage hybrid, planned at California’s Kern County, should be commercially operational by 31 December 2023, PV Tech writer Jose Rojo reported last week, with the LADWP Board of Commission unanimously voting to purchase power from the hybrid project(s) for a 25-year period, at record-breaking fixed tariffs for solar (US$0.01997/kWh) and energy storage (US$0.013/kWh).

In the latest edition of PV Tech Power, the quarterly journal from our publisher Solar Media, experts Janice Lin and Jack Chang at consultancy Strategen take a brief look at how “even in progressive California, Los Angeles stands out with its bold plans to decarbonise its power sector”.

Lin and Chang use LADWP as an illustrative example of how LADWP is “fully embracing energy storage as a critical tool for achieving the city’s clean and affordable energy goals,” as excerpted below:

Even in progressive California, Los Angeles stands out with its bold plans to decarbonise its power sector. The city’s municipal utility, Los Angeles Department of Water and Power (LADWP), is the United States’ largest publicly owned utility. LADWP is fully embracing energy storage as a critical tool for achieving the city’s clean and affordable energy goals.

LADWP is already very familiar with the benefits of energy storage. It operates a 20MW lithium-ion battery storage system at its Beacon Solar Plant as well as a 1,500MW pumped hydro facility at Lake Castaic. In February 2019, LADWP announced it will not be replacing three gas-fired power plants scheduled to close by 2029. Instead, the utility will employ clean-energy alternatives such as solar and energy storage to make up for their 1,660MW of generation capacity. In July, LADWP proposed building the largest capacity utility-scale solar battery project in the country to date. The plan, submitted by developer 8minute Solar Energy, would build as much as 400MW of solar capacity and 300MW of energy storage at the historically low price of US$19.97 per MWh. As of early August, approval is pending at the LADWP board.

These moves are aligned with the city’s Green New Deal, which lays out ambitious sustainability targets and devotes billions of dollars for new infrastructure. The plan calls for increasing cumulative energy storage to as much 4,000MW by 2050 – far larger than the current target for the entire state of California (1,500MW). Driving all that energy storage demand is the city’s goal to supply 55% of its electricity needs with renewable energy within six years and 100% by 2045. Much work remains but given the leadership of the city and state, Los Angeles is well poised to succeed in achieving its clean energy goals with storage.

The Strategen authors also take a focused look at California in an authored piece for the journal, 'California’s initiatives to overcome its challenges in the sun', which we have just republished on the site here.

EBCE has issued a Request for Information (RFI) for adding “new resource adequacy and/or peak energy”. The utility wants to procure new capacity with contracts set to start between January 2020 and December 20203. The RFI said this capacity could be standalone, front-of-meter energy storage project, it could be new generation sources, repowering of existing plants or even hybridisation of “existing resources with battery storage”.

One of California’s Community Choice Aggregation (CCA) municipal groups, set up as an alternative to the state’s three big investor-owned utilities (IOUs), EBCE is now seeking new resources and clear indications of what those should cost in the market, with contracts of up to 20 years duration being put on the table. While it remains largely ‘technology agnostic’, the types of resources EBCE procures are likely to be firmly dictated by the terms of the RFI as follows:

EBCE may seek multi-hundred MWs of Resource Adequacy as a result of this RFI and plans to issue a Request for Proposals at a later date. EBCE may also seek shaped energy during certain peak hours in later afternoon and early evening hours.

Projects can be sited outside of California but must be delivering energy and / or services to the CAISO grid. Preference is expected to be given to projects that could be delivered before the beginning of 2022, while respondents have just until 27 September to make their initial submissions. EBCE said that including the closing of a US$50 million unsecured credit facility with Barclays Bank in 2018, the CCA has “approximately US$100 million in unrestricted cash and available credit lines.