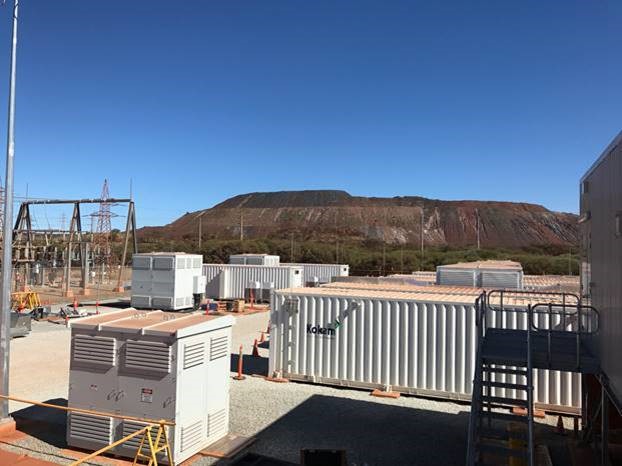 The battery maker also served as system integrator, while engineering group ABB supplied its Powerstore ‘Virtual Generator’ software-based solution to manage the microgrid. According to Kokam VP Ike Hong, who spoke with Energy-Storage.News yesterday, while the company has supplied various projects outside of its native Korea with batteries and equipment before, this is the first turnkey, whole project it has delivered from design to execution. Kokam worked with Australian system integrator UGL on the project.

“We’ve done storage systems of between about 3MW to 5MW each in Australia, Europe and the US and we’ve done between 10MW to 15MW of UPS product systems, which are not [strictly stationary] energy storage but a pretty similar product. As a turnkey solution, a complete system outside Korea this is our first and largest energy storage system that we’re delivering.”

According to Hong, Kokam had been looking for a niche application where the high power batteries could be a good fit, which led the company to look at the mining sector.

Kokam said the batteries’ have a “better cycle life and extensively more high power” than even other NMC batteries out there. While it comes in at higher capex, an estimated 10% to 20% more than other lithium batteries, Hong claimed the higher efficiency means there is less need to ‘oversize’ battery installations, as is often the case for grid-scale Li-ion systems.

While high power applications used to be a very niche market because a lot of customers were not aware of the available options, in terms of what battery size they needed, this is now changing, Hong said.

“A lot of customers realised that lithium-ion pricing from Tesla, LG Chem, Samsung SDI, Kokam, they’re pretty much in a similar range today. The way they’re approaching the market is how to reduce the entire capacity of the battery system. They realise they’re putting too much battery in, it’s not necessary to solve their power quality issues. A lot of customers try to reduce the energy rate but keep the same power rate and try to achieve maximised benefits of operating the storage system.

“For example, with Tesla’s battery, if Tesla’s battery can match up this power rate they’ve got to put in a battery of more than 30MWh to 40MWh. This is 30MW of power but considering the inverter, the cabling and entire system efficiency losses, our system is dispatching about 38MW to 39MW of power.

“In typical lithium-ion batteries they need about 30MWh to 40MWh battery systems to operate this size of power system. So we deliver only [a] 10MWh battery which is one quarter the size of the lithium-ion battery. So whatever Tesla or Samsung’s pricing, we’re delivering one fourth of the size of battery. For this type of application, we are way cheaper than others and [more] competitive. Customers don’t have to buy a very large battery so total cost of ownership and initial upfront investment is a lot less than buying large battery systems.”

Energy-Storage.News previously reported on the project as it got underway a couple of months ago. It is now completed, Kokam’s Ike Hong said, increasing the efficiency and benefiting the economics of operating mines for Alinta’s customers. However, the exact nature and amounts of energy or electricity costs being saved are considered commercially sensitive and Alinta has not made them public. Alinta CEO and managing director Jeff Dimery did however say that from economic and sustainability perspectives, the project makes perfect sense.

“For the iron ore industry in the Pilbara, generating hundreds of thousands, if not millions of dollars' worth of output an hour, a reliable energy supply is crucial. This battery will let us better handle peak demand periods, increase reliability for our customers and lower our emissions as a result.

“The project demonstrates our commitment to finding innovative ways to integrate our existing thermal generation portfolio into an evolving market that will incorporate more renewable generation and other disruptive technologies, with an emphasis on sustainability, reliability and affordability of supply.”

The UHP NMC battery has a high max discharge rate at 10C, a 40 foot container can contain up to 3.77MWh of NMC batteries, while Kokam claims it can withstand 10,000 charge and discharge cycles.