An ‘experiment’ in France where grid-scale energy storage will be deployed to assess how batteries can ease congestion on transmission operator RTE’s network is paving the way for further opportunities in the coming decade, Energy-Storage.news has heard.

Three stakeholders Total, Nidec ASI and Blue Solutions, lead projects to deploy 32MW/98MWh of energy storage in RTE’s Project RINGO, across three systems at strategic locations in mainland France. The three awards were made before the end of 2019, with construction to take place from this year and the battery systems’ efficacy at reducing congestion to be assessed through to 2023, after which point they will be sold. 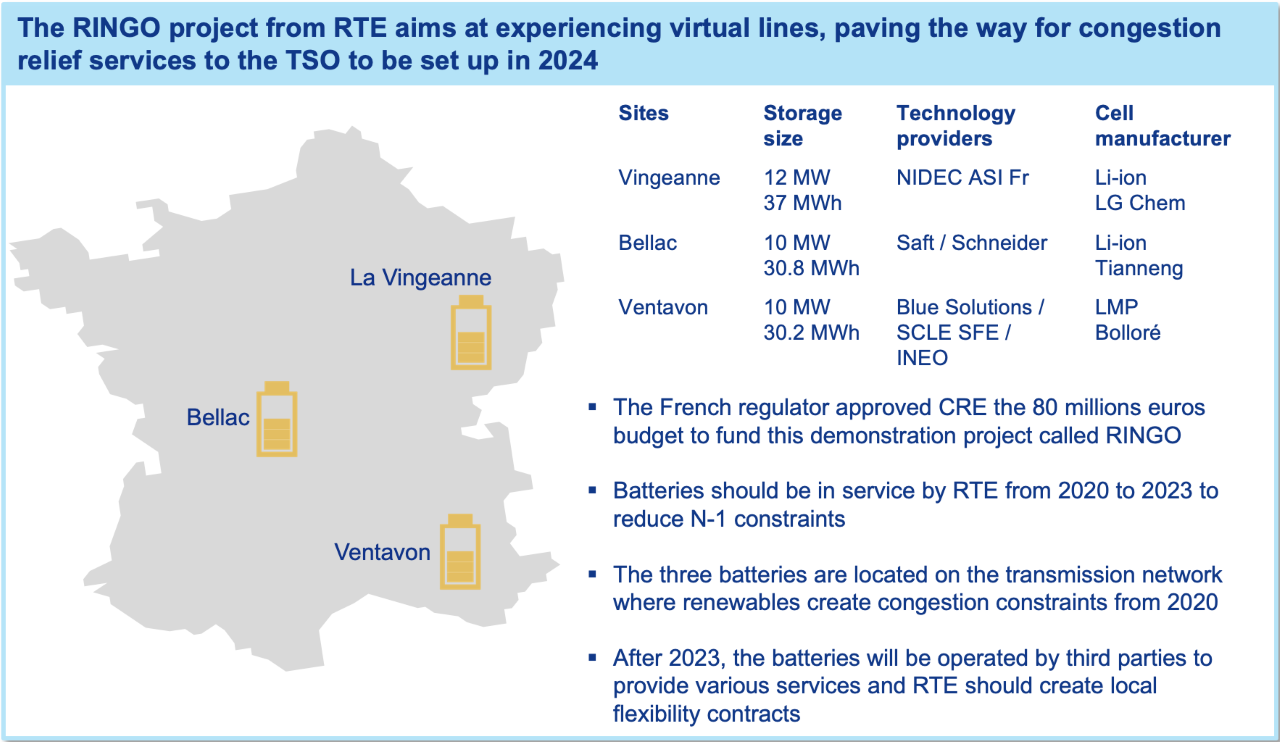 “RTE wants to try out batteries as virtual lines. It’s a new way for them to transport electricity virtually, because if you charge a battery at one point and discharge at another it’s just like you’re transporting electricity,” Corentin Baschet, an analyst and director at market research and technical consultancy firm Clean Horizon, told Energy-Storage.news.

By paying for these strategically located batteries on the grid, the transmission operator could defer much more expensive investment in network upgrades. It’s the same principle behind ‘Grid Booster’, a mega-battery plan proposed by three grid operators in Germany. Essentially, the utilisation rate of transmission lines can be theoretically doubled by adding a battery alongside the N-1 redundancy that must be built in to any network i.e. if a line fails, an extra line, the N-1, can be used instead. The cost of investing in an extra transmission line that could run for hundreds of kilometres cross-country could be alleviated by “having the battery provide contingency,” Baschet said.

Being an already-awarded contract opportunity for three domestically-headquartered stakeholders, Baschet said that it is not a commercial opportunity for other stakeholders today, but “the idea in the future is that these batteries are used, that there is a market for this flexibility”. At the moment in Europe transmission or distribution network operators are not allowed to own energy storage assets, expect in experimental or pilot projects such as this one. 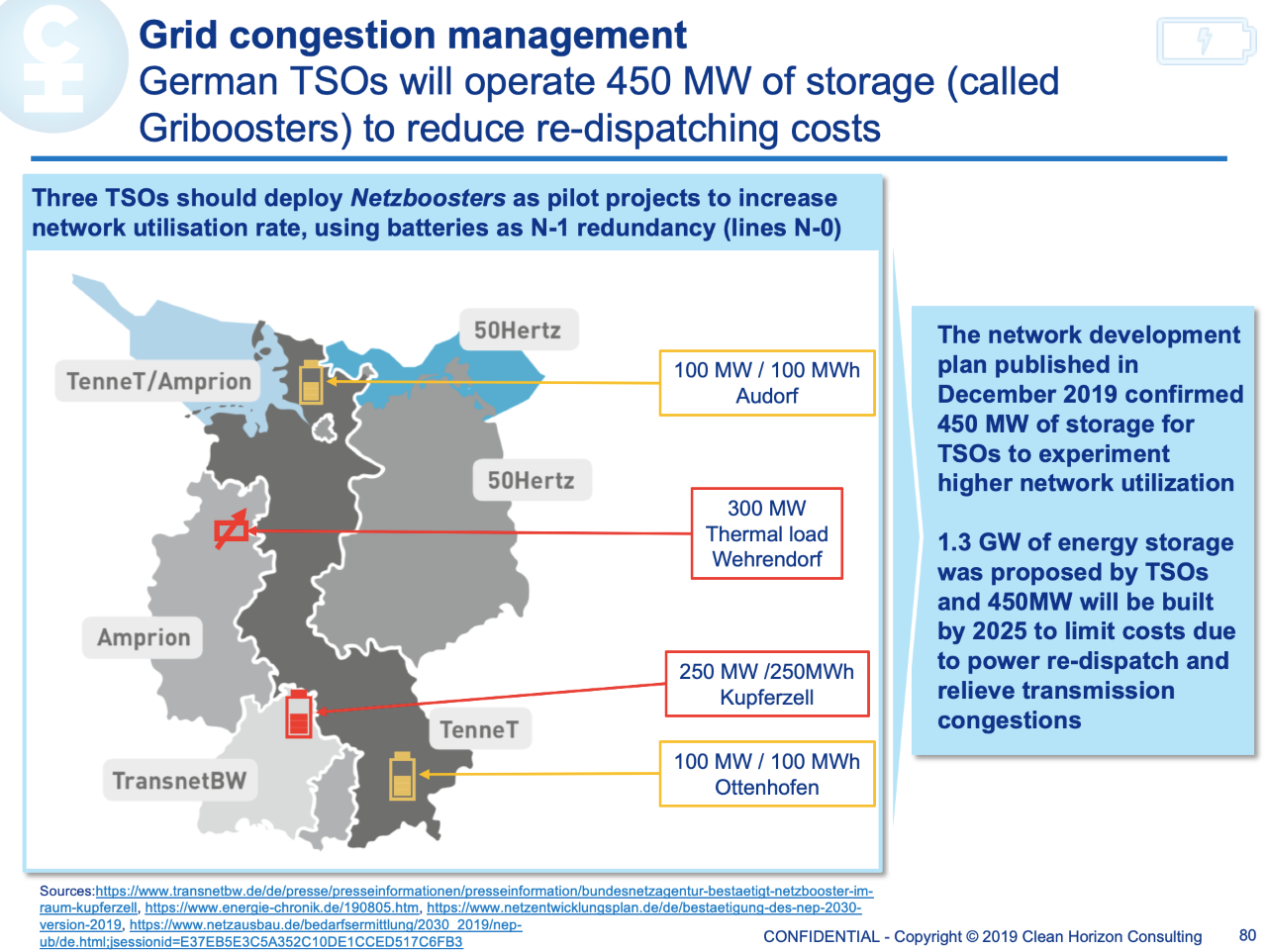 France’s mainland opportunities still in early days, while island tenders have raced ahead

Also in the news these past few weeks has been the award of Capacity Market contracts via an auction for low carbon resources for seven year periods. This included 253MW of energy storage, with Total (via subsidiary Saft) awarded the biggest single project at 25MW.

The auctions last month were France’s first to have long-term contracts, Clean Horizon’s Baschet said, after the European Commission (EC) asked France to make contracts longer than the original one-year periods, to “provide investors with some visibility”. Assets are paid in what Baschet described as a type of Contracts for Difference (CFD) remuneration, “so if the market clears higher than the price you were awarded you give some money back to the TSO and if it clears below you get the money from the market to top it up to reach your CFD value”.

Revenues from Capacity Market assets can also be combined or stacked together with revenues from the shared European frequency regulation market, in which France participates along with five other countries: Germany, Austria, Belgium, the Netherlands and Switzerland (Denmark is also soon to join). It has been noted that prices for this service have fallen quite sharply in recent months, a good sign that the market is working, but also a difficult short term market dynamic for providers to deal with.

First past the post for France in terms of energy storage opportunities and deployment however were the tenders for solar-plus-storage and energy storage on its various island territories, which have been ongoing since 2012. Non grid-connected islands around the world have long had an opportunity to decarbonise with renewables economically, because the cost of importing and burning fossil fuels to such locations is generally so much higher than on mainlands.

“It’s a small but recurring market because every year we have a 50MW tender for PV-plus-storage and storage has approximately half of the capacity of PV,” Baschet said. About 200MWh of storage is in the process of being deployed on islands including Guadeloupe, Martinique and Corsica, which have quickly reached 20% and 30% penetrations of renewables in their energy mix.

From the macro level, mainland France has perhaps been slow to embrace energy storage – and even solar PV – due to around 70% of generation coming from nuclear power plants. However up to seven of these could close in the next 10 years, while the French government Multiannual Energy Plan (PPE or Programmation pluriannuelle de l’énergie) seeks carbon neutrality by 2050.

A February note sent to press by law firm Eversheds Sutherlands highlighted that this 10-year plan includes a 50% reduction in nuclear’s share in the energy mix by 2035, along with a 14% decrease in energy consumption by 2028, and in the shorter term an increase in installed renewable electricity production capacity by 50% by 2023 and by 100% by the year 2028 compared to 2017’s 48GW.

In order to do that, Baschet said, the market needs to be created for flexibility on the networks and pointed to perhaps a surprising source of inspiration that France could look at – its neighbour, Britain.

“In France, the market is not as transparent as it is in the UK. For instance we don’t know where the grid congestion is, whereas in the UK you already have a lot of heat maps for DNOS in the UK. We don’t know where we need flexibility [in France], but the regulator has required the TSOs to provide some heat maps and to be more transparent in the constraint of the networks so the market can get more signals on where to build storage systems.

“It’s in the process of happening, this transparency but there is still a bit of a way to get there. Because the market in the UK is very competitive and generation capacity shares are well spread across different stakeholders. You can also look at the UK’s Balancing Mechanism. In France we don’t know who’s providing and at which price, in the UK you select any unit on the BM report website and you can see when its providing what at which price. It’s a level of transparency that we probably still need five or six years to reach in France”.

Also on the site today, read Europe: Creating a sustainable power system for the future, a technical paper from consultancy EnAppSys, which first featured in vol.22 of PV Tech Power: the quarterly journal is also available as a free download.