A cross-border platform is being created in Europe for the provision of secondary reserve to maintain the grid's operating frequency, which will be open to energy storage in the coming years. Tanguy Poirot, analyst, and Corentin Baschet, head of market analysis at energy storage specialist consultancy Clean Horizon take a deep dive into how the new automatic frequency restoration reserve (aFRR) market might look, and why it has potential to be so significant for Europe's energy storage market.

While Frequency Containment Reserve (FCR) remains today the main revenue stream for energy storage systems in continental Europe, developers and investors are looking for other revenue streams to face the decline associated with this primary reserve service.

Primary reserves have the fastest response requirement (activation within 30 seconds of receiving a signal), followed by secondary reserves, also called automatic Frequency Restoration Reserves (aFRR), the aim of which is to restore the frequency to its nominal value. aFRR requires longer activation periods in a single direction, meaning they are required to inject or withdraw energy from the grid during several minutes up to hours.

This increased activation time requirement would typically result in a requirement for a discharge duration of 2 to 4 hours to deliver this service, but the main barrier to storage in this market is actually the regulations that do not allow storage to participate in most countries.

The European aFRR mutualisation project, called Project PICASSO, currently being rolled out throughout Europe will enable continental European countries to share their balancing energy. This project has triggered a region-wide review of the secondary reserve, resulting in storage-compatible market rules in many countries such as Belgium, France, Spain.

It is worth mentioning that the PICASSO project and the associated market opening will not take place simultaneously in every continental European country. While France and Germany will be leading the way with the implementation of the platform in early 2022, they will be followed within a few months by a large group of countries including Italy, Belgium, Switzerland or Slovenia. However, some countries like Spain, Portugal, Poland or Sweden will not be joining the PICASSO platform before 2024. 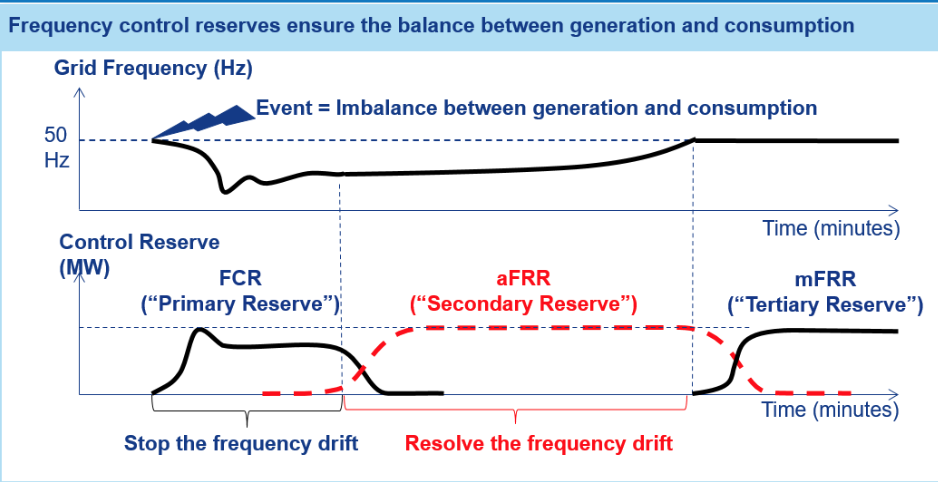 Where aFRR will fit in and play a role in keeping the lights on in Europe. Image: Clean Horizon.

On the revenue side, the secondary reserve offers a combination of reservation (in €/MW/hour of availability) and activation payments (in €/MWh activated). While the activation payment is uncertain and can be challenging to capture for storage, the reservation payment is very similar to the FCR remuneration model, and therefore very attractive for storage assets. The reservation of the aFRR capacity tends to be procured through daily pay-as-clear auctions where expensive thermal assets are the price makers today, until storage disrupts the market.

Looking at past 2020 prices, it is clear that the secondary reserve reservation payments remain much higher than the FCR one in most countries. While current FCR prices result in a yearly revenue of approximately €70k (US$83.35k) /MW/year, aFRR prices reach levels beyond €100k /MW/year in several countries.

Of course, these impressive price levels will not remain steady with a growing penetration of storage assets on the market.

Clean Horizon expects the observed trend on the FCR market to replicate on the aFRR markets: battery storage assets are very likely to bring prices down as they penetrate these markets even though they are larger. Secondary reserve markets are 2 to 3 times larger than the FCR market in terms of capacity reserved.

The reservation price level is likely to decrease as storage projects are developed to capture this opportunity. The PICASSO project will thus reach its initial goal of reducing the costs of reserves by sharing resources across different countries. 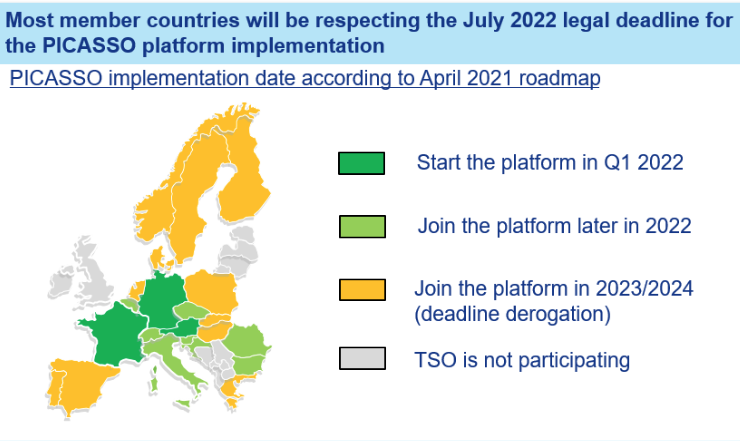 While most of Europe’s networks will adopt Project PICASSO, it won’t all happen at the same time. Image: Clean Horizon based on data from ENTSO-E.

First to act will be first to benefit

Secondary reserve is no longer a vague, far-fetched revenue opportunity for storage. Battery storage projects are currently being developed in Belgium, France, Germany, Switzerland, and many other countries, officially targeting the emerging aFRR market. As it is often the case with merchant-based storage projects in Europe, the “first come, first served” idiom is likely to apply once again for the secondary reserve market.

The growing interest for aFRR throughout Europe is confirmed by Clean Horizon's recent engagements: the firm has been involved in six battery storage projects dedicated to secondary reserve in four different countries during the past year. Clean Horizon has been supporting these projects in the market study, sizing optimisation and discussions with manufacturers.

Cover image: Rendering of a short-duration battery storage project being built in Slovakia to enable an existing natural gas power plant to continue participating in secondary reserve market opportunities, by cutting in half the time it takes to reach full power on request from the transmission system operator (TSO), from seven and a half minutes to 15 minutes. Image: Leclanché.

Below: Watch our recent webinar on aFRR and how it can help Europe's investment community become more comfortable with energy storage, with Clean Horizon CEO Michael Salomon along with Paula Trevasso from UK-based energy storage investor Gore Street Capital.