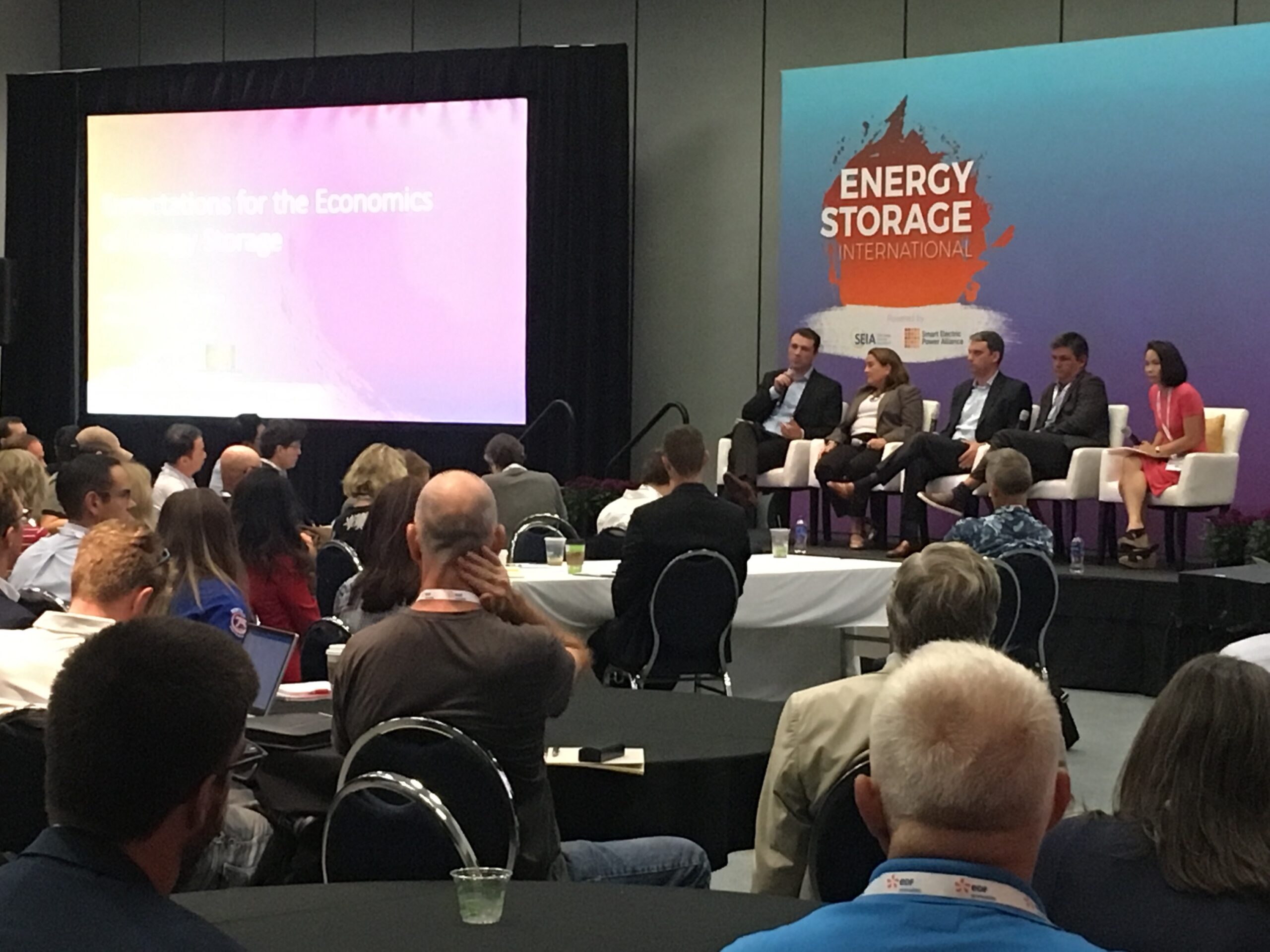 While the relationship between renewable energy and energy storage is a close one, combining storage with natural gas is also an important stepping stone measure in the transition to 100% renewables, Energy-Storage.news has heard.

Batteries and other storage used to integrate solar and wind onto electricity grids, smoothing out periods of intermittency or shifting loads to their optimal time of use, are obviously a key focus of the industry and of media attention. Solar-plus-storage is gaining traction, with the likes of commercial and industrial ‘intelligent’ energy storage systems and services provider Stem Inc launching dedicated solar-plus-storage lines to coincide with last week’s Solar Power International/Energy Storage International in California.

However, as Janice Lin of the California Energy Storage Alliance (CESA) told Energy-Storage.news at the show, it isn’t always just when renewables and batteries are paired directly together that decarbonisation becomes a more achievable goal.

“It’s huge. Everyone always talks about storage as being linked to renewables and it is a great asset for renewables but it can do great things. [California investor-owned utility] Southern California Edison said the integration of storage into their gas peakers is the most cost-effective application they’ve implemented to date.”

Renewables as baseload will ‘flip the old model on its head’

The theme was taken up in a recent interview with John Jung, CEO of energy storage software and systems integration specialist Greensmith Energy. Greensmith was acquired by Wartsila over a year ago, a parent company with a background in both wind and gas-fired turbines. In August, Energy-Storage.news reported that Greensmith’s most recently completed project saw battery energy storage system (BESS) technology including the company’s GEMS software and control platform, installed at a natural gas plant in Hungary, Europe.

The plant combines three of Wärtsilä’s W34SG engines with 6MW/4MWh of battery energy storage, making it capable of delivering “flexible baseload and peak load”, the Finnish parent to Greensmith claimed. Greensmith CEO Jung said that although this may be a surprising development, it remains in line with Wärtsilä’s own “100% renewables vision”.

“We see, as Wärtsilä, a vision where very quickly and in different parts of the world, renewables are going to become the new baseload. It’s not only going to be the cheapest source of electricity on an LCOE (levelised cost of energy) calculation, but you [also] want to make use of all that electricity that you’ve spent enormous effort collecting from either the wind or the sun. That becomes the new baseload.”

Conversely, Jung said, the need for flexibility on the grid becomes something existing fossil generators could provide at least a portion of. The old model becomes “flipped on its head” and thermal fossil generators that used to be the baseload will instead step in at points where flexibility is needed.

Coal is the most inefficient, polluting and increasingly expensive of the fossil fuel options. Combined cycle gas turbines (CCGT) while better, can equally take 20 to 30 minutes to fire up or respond to signals, unlike batteries which can respond in seconds or less. Greensmith has incidentally just launched its first standardised container-housed energy storage systems.

“When you’ve got something that’s a coal-fired plant or a CCGT that takes 20-30 minutes or even an hour to start up, that is not good economically, it’s not good from a CO2 standpoint and it’s definitely not good from the flexibility of what’s needed on the grid as you get increasing renewable penetration,” Jung said.

Energy-Storage.news recently reported that, unlike the existing assets to which Janice Lin of CESA referred, some brand new thermal generation-plus-storage – including coal – is being planned in China. Greensmith’s John Jung said he felt it important to not be “judgemental” of developing and emerging regions, which have largely not been responsible for polluting legacies of past global industrial revolutions to date. Jung said he had not heard about those specific plans, but said he felt some dismay if new coal power plants are being enabled by such developments and projects.

“I don’t know about that particular China investment. But we still see people investing in new coal generation capacity around the world. Less and less so – we see more net shutdowns of coal [overall] – but if you think about the poster child for a polluting, inefficient form of generation for conversion of potential energy into electrons, coal is perhaps one of the worst,” Jung said.

“While it’s fantastic that India and other countries are deploying a lot of renewables, a lot of those people still need to rely on fossil fuel in order to get their electricity. I’m cautious with myself with being judgemental.”

From a business point of view, Magnus Miemois, director of hybrid energy solutions at Wärtsilä told Energy-Storage.news that integrating storage from the beginning of a new asset’s development could be a bigger opportunity than retrofits of storage to optimise existing assets. He said this would not stand in the way of Wärtsilä’s “100% renewables” vision in the long term.

“There is a clear correlation that the more renewables you put into a system, the more flexibility you are going to need to have because decarbonisation is obviously one objective, but you have the objective of grid reliability to attend to at the same time,” Magnus Miemois said.

“Some of the traditional forms of generation are simply way too inflexible for existing assets to perform that role. So I can see why China is adding new thermal coupled with storage, at the same time they are increasing the renewables generation of the grid because they have grid reliability and other objectives to meet that renewables alone may not be able to meet.

“You add storage to thermal, you get a better performance and minimise the carbon emissions. So it is a necessary element of future energy systems.”

According to Miemois, one such project for Wärtsilä in Australia will see 1GW of coal generation retired, to be replaced with 2.6GW of additional capacity, including flexibility, renewables and energy storage.