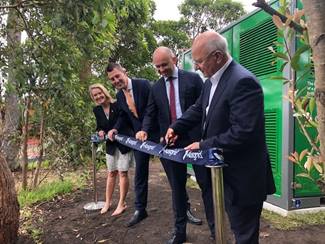 The new battery energy storage system, which is located in Beacon Hill, a suburb of Sydney, enables residents of Australia’s east coast to store and share excess solar power.

It has been built as part of a two-year trial Ausgrid is carrying out to test the efficacy of community batteries fed by solar energy. The Beacon Hill system is one of three being installed across Sydney. Ausgrid customers who register to participate in the battery storage scheme can virtually store up to 10kWh of excess solar energy per day, which will then be credited against their daily electricity use.

Richard Gross, Ausgrid’s chief executive, said the project will benefit customers by “keeping downward pressure on energy prices by reducing peak demand”, as well as supporting the region’s existing clean energy generation network. Residents who are involved in the project will be able to access more solar energy generated without buying and installing their own storage system.

Gross added that community batteries are “the most cost effective” way to bring renewable energy onto the grid, allowing households within a specified radius to share their excess energy generated by solar panel.

“This can save households thousands of dollars on the upfront cost of an individual battery,” Gross said.

Matt Kean, Australia’s energy and environment minister, said the trial in New South Wales could “deliver some of the cheapest, cleanest, and most reliable electricity” in the world.

Ausgrid opened up a Community Battery Trial for customers with solar installations on their properties last October, having first announced the project in 2019. The provider, which serves close to two million customers in Sydney and New South Wales, recruited KPMG to carry out a feasibility study on the project, which was published last year. The auditor found that systems over 250kWh have a better chance of breaking even than smaller systems due to the fact that they can tap into more revenue streams.

“We are confident the trial will show that community batteries have a huge role to play in the low-cost transition of our energy system,” Gross said.