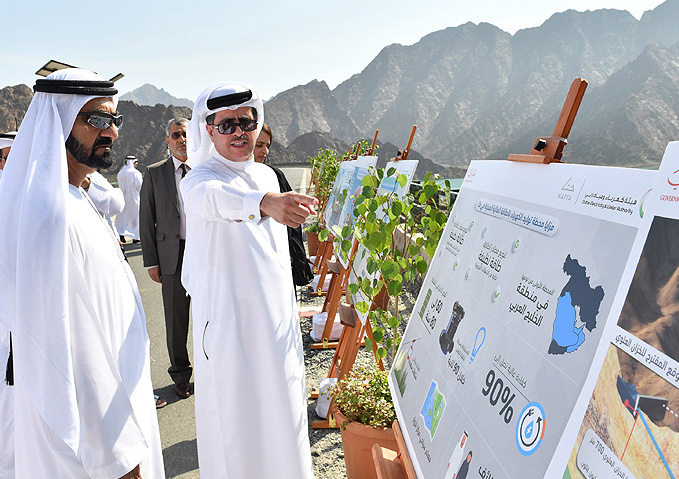 A consultancy contract for a 250MW pumped hydro energy storage plant in Dubai has been awarded to French power company EDF by the emirate’s main public infrastructure company.

DEWA (Dubai Electricity and Water Authority) said on Monday that it had awarded EDF the consultancy for the proposed project, at Hatta Dam in the Hajar Mountains of the United Arab Emirates. DEWA said the contract is worth AED58 million (US$15.8 million).

Thought to be the first project of its kind in the Arabian Gulf, the installation will use water stored in the Hatta Dam and in an upper reservoir 300 metres above it, of 1,716 million gallons and 880 million gallons capacity respectively.

Solar energy will be used to pump water from the dam to the upper reservoir during off-peak times. Then, during peak load hours, water will be dropped from the upper reservoir, via generating turbines, back into the dam. The turbines will generate power that will then go into DEWA’s electricity grid. DEWA claimed the plant could respond to demand for power within 90 seconds, and operate with a power production efficiency of 90%. The project's lifespan could be as long as 60 to 80 years.

The consultancy contract awarded to EDF will allow the French utility to design the plant and come up with studies on hydro-geological, geological, environmental, geotechnical aspects and deep excavation. The contract also extends to deep-water tunnel design, dam and hydroelectric power station, tendering for material supply, supervising construction, site installation and on-site testing and commissioning.

Pumped hydro storage plants of varying sizes have been discussed and proposed in numerous territories in recent years, including large projects in Australia, China and a 500MW project in California. Due to the amount of land and construction work required, they are not frequently considered for deployment in built-up areas and had come to something of a halt in construction of new facilities until recently. Plans for other new pumped hydro plants which exploit natural location advantages include a project in Germany which would utilise an old coal mining site, filling it with water.

In January of this year, DEWA and EDF signed an agreement to cooperate and share knowledge on energy topics including energy storage, renewables, EV chargers and energy system integration.