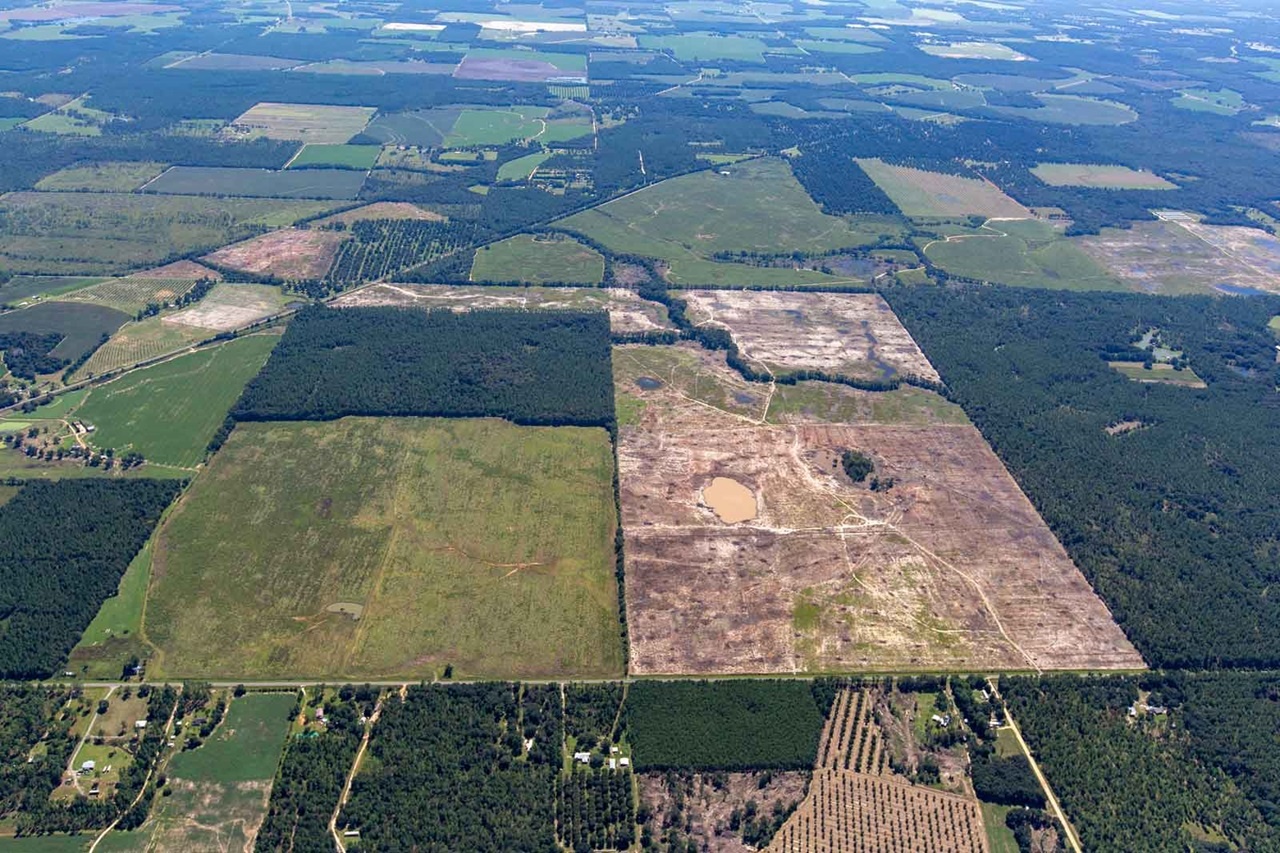 The site for the 1,800 acre solar-plus-storage farm in Mitchell County, Georgia, US. Image: RWE Renewables.

Work has begun on a 195.5MW solar farm in Georgia, US, colocated with 40MW / 80MWh of battery storage for RWE Renewables, subsidiary of Germany-headquartered multinational energy company RWE Group.

RWE Renewables and utility company Georgia Power signed a 30-year power purchase agreement (PPA) deal for the utility to off-take energy generated by the plant in November 2019, when the project was called Broken Spoke Solar but appears to have since been renamed Hickory Park.

RWE will operate and manage the solar facility, selling energy and renewable attributes i.e. renewable energy certificates (RECs) to the investor-owned utility, which serves around 2.6 million customers in the US state. The Hickory Park / Broken Spoke Solar project is expected to come online in late 2021.

The facility will occupy a space of around 1,800 acres in Mitchell County, Georgia. The solar PV generation will be integrated with a DC-coupled energy storage system, which RWE said will allow energy yield to be optimised while also increasing the predictability of the output it will inject into Georgia Power’s electricity grid. DC-coupling is still a niche, but growing technical solution for pairing solar and energy storage that helps increase efficiencies and reduce overall costs.

Mitchell County Development Authority executive director Paige Gilchrist described the project as a “new economic boost for our community,” adding that the “significant investment” by RWE will not only generate tax income for the county but also bring in “hundreds of construction workers who will be spending money here, therefore increasing our local sales tax”.

RWE Renewables said it has a number of energy storage projects under development in the US, both standalone and colocated with generation sources like solar and wind. The company recently claimed that its solar and wind portfolio will reach 10GW by the end of this year, while it also wants to “play a major role in energy storage”, RWE Renewables said in a press release. Parent company RWE Group is also targeting carbon neutrality by 2040.

“The Hickory Park Solar plant will mark our first solar facility in Georgia and our largest solar-plus-storage project in the US to date,” RWE Renewables’ chief operating officer for onshore wind and solar PV in the Americas, Silvia Ortin, said.

“The addition of this facility to our operating portfolio is just one example of RWE's strong focus on the US market and its growing ambition in solar and battery storage. The co-location of a solar plant along with storage provides us flexibility in finding solutions to fulfil the energy requirements of our customers.”

Energy storage development in Georgia has mostly been confined to pilots and tests, with the state inaugurating its first “smart neighbourhood” microgrid system for a residential community last year but little has been talked about in the way of large-scale energy storage so far. Upstream, residential battery storage maker Sonnen has located an assembly plant in Georgia, while South Korean battery company SK Innovation is building two electric vehicle (EV) battery gigafactories in the state presently.

Georgia Power’s most recent integrated resource plan (IRP), which is a 20-year plan designed to meet energy needs, was approved by the state’s Public Service Commission in summer 2019. The utility said that in addition to increasing its renewable generation by 72% by 2024, it also wants to own and operate 80MW of battery energy storage in order to “maximise value” of those renewables.