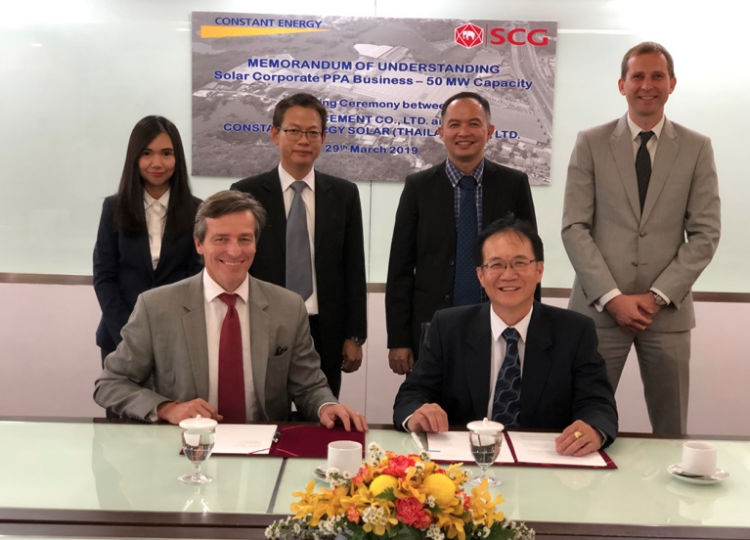 Thailand-based clean energy developer and investor Constant Energy has signed a Memorandum of Understanding with one of Thailand's largest companies, Siam Cement Group (SCG Cement), to deploy 50MW of C&I solar PV plants, with the company chief planning for an energy storage component on many of the projects.

Power off-take from the projects will be handled under corporate power purchase agreements (PPAs) for numerous factories of SCG Cement in Thailand as well as several other companies chosen by SCG, which is 30% owned by the Crown Property. Power will be supplied directly from the Constant Energy plants to the factories.

Franck Constant said it was too early to say where the floating PV systems would be located, but the target is for all 50MW of solar to be deployed over the coming three years in multiple provinces across Thailand including Saraburi, Lopburi, Samut Prakan, Rayong, Songkhla, Buriram.

Siam Cement Group is a leading business conglomerate in ASEAN region, having been established in 1913 following a royal decree of His Majesty King Rama VI to produce cement.

“I had the chance 20 years ago to negotiate and conclude a joint investment for a 120MW cogeneration power plant with Siam Cement Group (Nong Khae Cogeneration) which is still operating successfully today and servicing industrial customers with high-quality low-cost steam and power. Siam Cement and its team have been great partners to work with. I am excited to execute this MoU today with Siam Cement to provide even lower cost power, this time through our zero-carbon emission PV power plant for at least the next 20 year,” said Franck Constant in a release.

The company has already started engineering of its first solar PV plant under the deal and the pre-construction permitting and licensing process will be handled in Q2 this year, followed by construction.

Constant has long said that corporate PPAs are likely to dominate the clean energy space in Southeast Asia over the next few years. He also said that energy storage could be a key factor in alleviating the transmission capacity constraints currently impacting the highly promising Vietnam solar PV market, where many projects are crammed into one or two states with the highest irradiation.