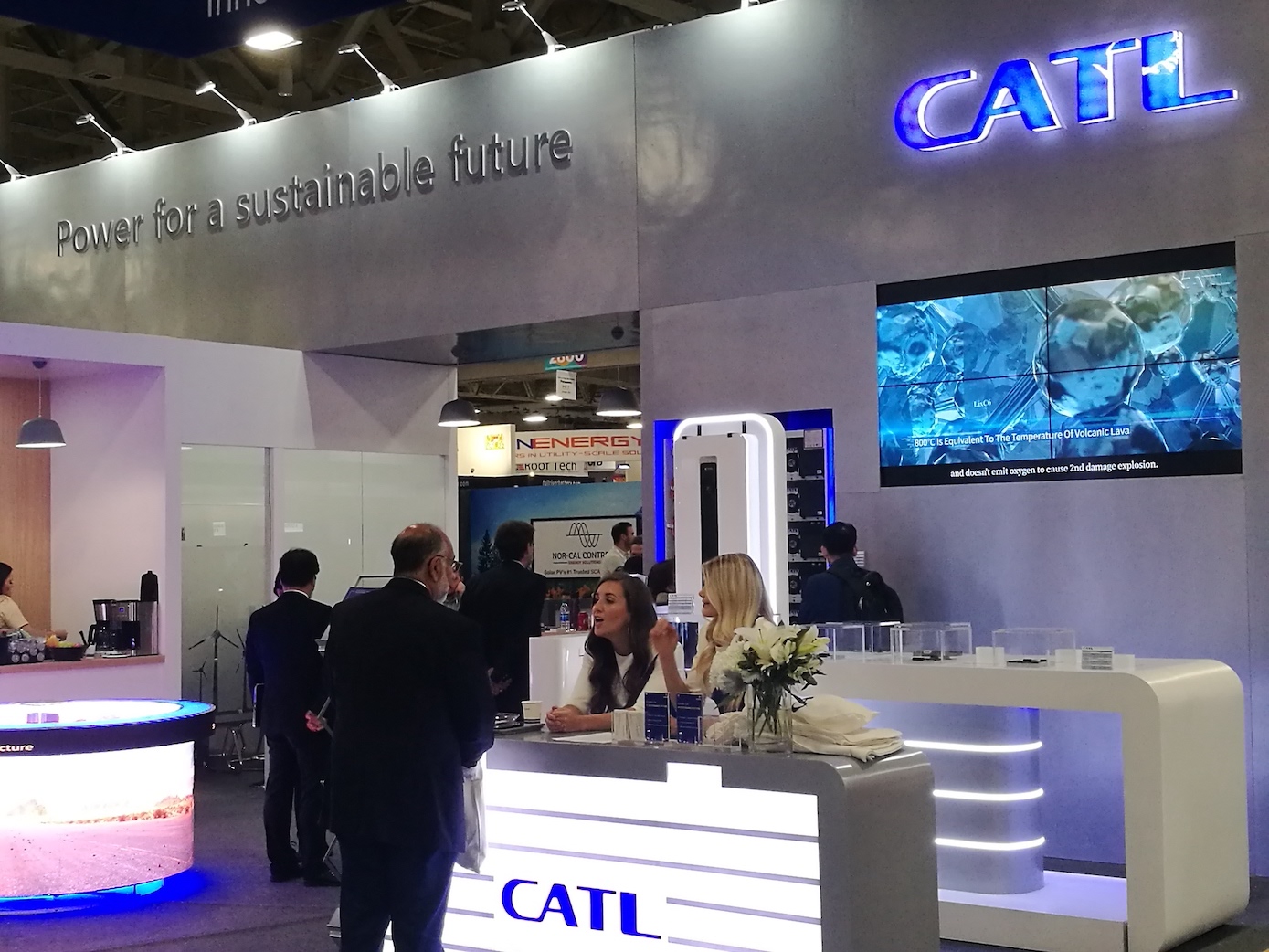 CNESA also noted the large numbers of member companies including CATL (pictured here at SPI in Utah, 2019) making donations of ‘funds, medical equipment, emergency power supplies, vehicles services, and other support to help those at the frontline of the epidemic’. Image: Andy Colthorpe / Solar Media

A survey of present and expected impacts of the COVID-19 crisis on member companies in the China Energy Storage Alliance (CNESA) has underscored their faith in recovery prospects, despite the worries of nearly 80% of respondents over “reduced operating income and tightening of liquidity”.

A summary of findings emailed to Energy-Storage.News said there has been an undoubted impact on both the upstream and downstream end of the energy storage industry, with supply chain production and project deployments and grid connections alike suffering delays.

However, association research manager Wang Si said in his summary that 64% of survey respondents believe “new opportunities for energy storage will emerge after the outbreak is contained,” while “most also believe that the energy storage market can still achieve its predicted growth rate in 2020”. The survey's response-gathering process began on 5 February, while China was the focal point of the COVID-19 outbreak before the global spread that followed.

“In general, because the energy storage industry is still in an early stage of rapid development, the epidemic is likely to have a limited impact on the overall market development for the year,” Wang Si of CNESA wrote.

In other words, CNESA noted that the domestic industry only began its full-on commercialisation last year and still awaits the creation of a supportive policy structure and market environment that could bring energy storage to rapid growth.

Perhaps hardest hit in terms of revenues will be small and medium-sized businesses that are primarily focused on the energy storage market, including system integrators, project developers and asset operators.

The rate of cost reductions has also slowed, the survey found, with upstream material costs seeing a rise, coupled with predictable cost increases for international and domestic logistics and labour expenses. Overall, cost reduction also depends greatly on the scale-up of market demand, and with electric vehicle (EV) sales down as well as large-scale projects hitting deployment delays, with investment returns on projects also taking a hit, “the decline of energy storage costs is beginning to slow,” research analyst Wang Si wrote.

The first wave of responses to a simple survey by what could be called CNESA’s US counterpart, the Energy Storage Association, had found that around two-thirds of responding member companies had experienced or were expecting significant project delays. Similarly, CNESA's own polling efforts found that in the short-term, projects that were expected to become operational in the first half of 2020 in China “now face the risk of delayed commissioning.”

The second half of the year could be a different story, or at least that is the expectation of the Alliance. Delayed tenders and bidding for some power grid companies as well as generation companies directly affect project development, while solar PV and wind projects are likely to fail in meeting their deadlines for grid connection. But new projects are expected to be launched in the coming months, CNESA said.

The group has made some policy recommendations as well as requests to the government, asking that some targeted support including tax relief be applied, as well as direct financial assistance that could help companies struggling to meet project financing and fund repayment costs.

At the moment, nearly 80% of companies surveyed worry about revenues and liquidity, and around 30% believe their revenues for the first half of 2020 will drop by at least 20% compared to the first half of 2019. Going forward however, CNESA hopes that a greater recognition of the role energy storage can play in the national power system in China – and recognition of the way that energy storage can support economic growth – will see it become a pillar of the national energy planning process.

In related news, SNEC, the world's largest solar energy industry exhibition, held each year in Shanghai, has been postponed without new dates yet confirmed, sister site PV Tech has reported. It was set to take place in Shanghai between 25 – 27 May 2020.