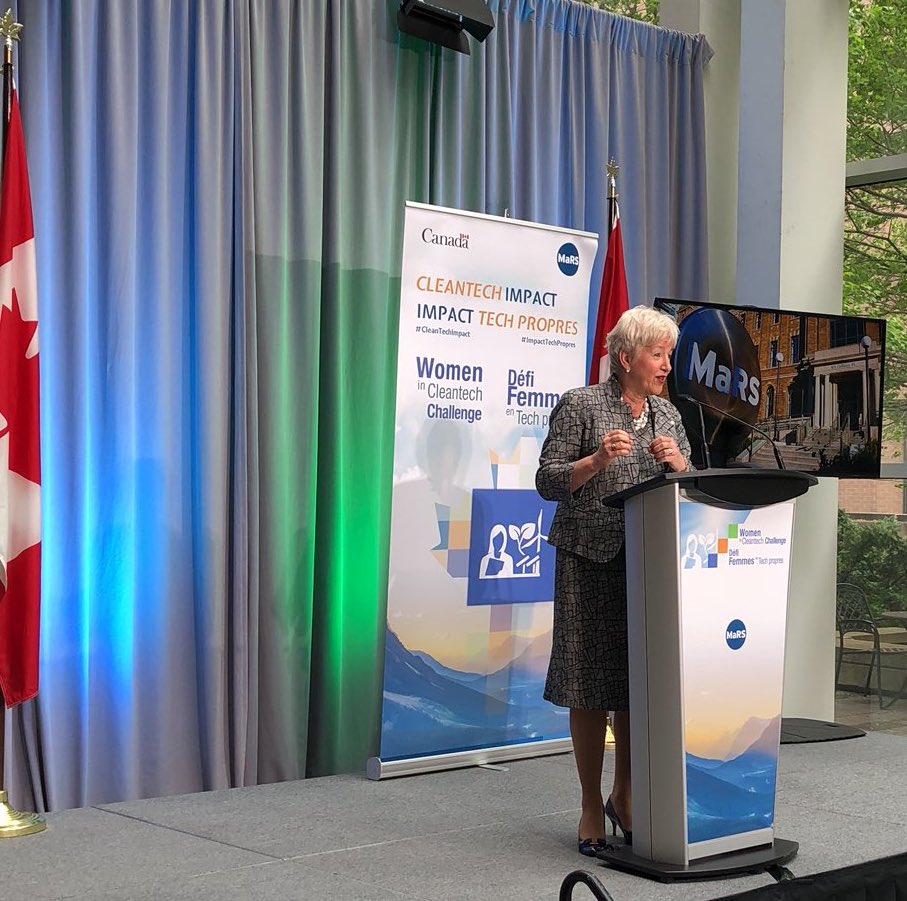 NRStor, one of Canada’s largest energy storage specialist developers, is working on the project. Pictured is NRStor CEO and founder Annette Verschuren speaking at a 2018 event. Image: NRStor via Twitter, cropped by Andy Colthorpe.

A plan to invest CA$2.5 billion (US$1.97 billion) in the clean energy economy by the Canada Infrastructure Bank could lead to involvement in one of the world’s biggest battery energy storage projects so far.

The Oneida Energy Storage project in Southwestern Ontario is a planned 250MW / 1,000MWh system which would perform multiple applications to benefit the electricity system and help integrate large shares of renewable energy.

The Canada Infrastructure Bank (CIB), which has identified clean power as one of the key tenets of an overall CA$10 billion ‘Growth Plan’ investment in revenue-generating infrastructure projects, signed a Memorandum of Understanding (MoU) earlier this month with Oneida Energy Storage LP, the joint venture (JV) company behind the project, formed by Canadian energy storage developer NRStor and Six Nations of the Grand River Development Corporation.

The latter group represents the economic interests of the indigenous First Nations community, Six Nations of the Grand River and the community’s Elected Chief Mark Hill said that the battery storage project “has the potential of contributing significantly to our mission of achieving economic self-sufficiency”.

The MoU signed between CIB and Oneida Energy Storage creates an agreement on the parameters of a potential investment by the national bank in the project, with a final investment decision to be made this Spring, following a period of further due diligence. The CIB said in a press release that it can provide various levels of specialised investment expertise to support the project’s developers, such as financial modelling and project structuring help.

The facility is one of a small number of similarly-sized projects announced in geographies including Australia and the US recently, several of which have also been four-hour duration battery systems. CIB said the Oneida facility would store surplus energy from both baseload and renewable resources during off-peak times and be put into the grid when demand peaks. In this way, it could reduce the region’s dependency on natural gas generation to meet the costliest periods of high demand on the electricity network.

It would also provide grid-balancing services, which could include frequency regulation, which again is a vital means of keeping the electricity network stable that has traditionally been done with fossil fuel-powered thermal generation but has been proven around the world to be something that can be done more cleanly – and more efficiently – with fast-responding battery assets.

“Energy storage is a game-changer that can help to enable Canada’s transition to a low-carbon economy and make Ontario a global leader in cleantech innovation,” NRStor’s CEO and founder Annette Verschuren said.

“We are excited to work with industry-leading partners on the Oneida project to deliver grid efficiencies at scale resulting in meaningful savings for rate payers. We believe Oneida will be just the first of many exciting storage projects on our country’s horizon.”

CIB said that this increased efficiency in the network will help lead to a “more affordable and cost-effective electricity system”. The Infrastructure Bank said in Q3 2020 that a CA$2.5 billion investment in clean energy would be included as one of five “major infrastructure initiatives” in that Growth Plan that represented a total CA$10 billion commitment to growing Canada’s economy and aiding recovery from the impact of the novel coronavirus pandemic. CIB CEO Ehren Cory said the CA$2.5 billion will be invested within three years across Canada.

Canada’s Minister of Infrastructure and Communities, Catherine McKenna, said that “renewable energy projects in partnership with Indigenous communities – like the Oneida Energy Storage Project with the CIB, Six Nations of the Grand River Development Corporation and NRStor Inc. – are a great example of how our economy will grow in the future and how forward-looking investments can help Canadians achieve their economic and environmental goals.”

“Investors here in Canada and from around the world are looking to locate and create jobs in places that innovate in this way, helping them reduce carbon emissions and be more competitive at the same time,” McKenna said.

Trade group Energy Storage Canada warmly welcomed the Growth Plan’s announcement at the time, particularly the specific recognition by Canadian policymakers – including Prime Minister Justin Trudeau – of the importance of energy storage in the overall economic recovery and growth of the nation, as well as in its transition to cleaner energy sources.

Yesterday, Energy Storage Canada executive director Justin Wahid Rangooni told Energy-Storage.news that while the association tends not to comment on specific projects until contracts have been finalised, the signing of CIB’s MoU for the Oneida project “is more positive news on unlocking the potential for energy storage in Canada,” congratulating NRStor and Six Nations Grand River for achieving a “significant milestone”.

Canada, like several other industrialised nations, is targeting the achievement of net zero emissions by 2050. Yesterday, Rangooni reiterated that Energy Storage Canada is “continually encouraged to see that governments at all levels in Canada are recognising the value that energy storage can provide to the system and to ratepayers – and of course to the environment,” adding that the association looked forward “to working with decision makers across the country to fully unlock the potential of energy storage.”

The Energy Storage Canada executive director recently wrote a Guest Blog published on this site that while many of Canada’s politicians and institutions have come to recognise the importance of energy storage, federal energy and climate change programmes have “maintained a blind spot” when it comes to unlocking the opportunity to use energy storage to help meet its commitments and build up national industrial competitiveness – particularly with President-Elect Joe Biden in the US pledging to use energy storage as a key to his own nation’s energy system modernisation plans. While Canada has long been a hot market for using commercial and industrial (C&I) energy storage to reduce electricity costs – at least in Ontario where a policy called the Global Adjustment Charge (GAC) puts impetus on C&I electricity users to cut their peak demand electricity consumption – grid-scale front-of-meter energy storage has been slower to take off in the country.

This may be changing however, with the Province of Alberta's grid operator recently announcing a pilot to allow battery storage to provide fast frequency response services being one example and Energy Storage Canada's Justin Wahid Rangooni told this site that that pilot is a step in the right direction to corrent current regulatory conditions which present barriers to maximising the value of batteries and other storage.