BASF will develop and market energy storage systems based on sodium-sulfur (NAS) batteries in South Korea in partnership with power-to-gas company G-Philos.

The battery technology was first developed back in the mid-1980s and commercialised by Japanese company NGK Insulators. It has been used at more than 600MW and 4,000MWh across about 200 large-scale energy storage and microgrid projects worldwide.

The NAS battery operates at a temperature of about 300°C, can operate for about 15 years without experiencing cell degradation, even with 100% depth of discharge cycling every day. It is marketed as suitable for applications that require up to about 6-8 hours duration of storage.

BASF and NGK entered a partnership in 2019, enabling the chemicals company to make its entry into the energy market with a “reliable, proven solution,” offering NGK access to its global sales channels.

In October 2021, as reported by Energy-Storage.news, BASF New Business, the arm which partnered with NGK, switched on a 950kW/5.8MWh NAS battery storage system at a BASF production facility in Antwerp, Belgium.

BSES and NGK now co-develop the NAS technology, with BSES as distributor.

The agreement with South Korea’s G-Philos comes after the success of a project to combine NAS batteries with a green hydrogen electrolyser at Sangmyung Wind Farm in South Korea. G-Philos’ power conversion system (PCS) was used in the project, which was inaugurated in 2020.

G-Philos will now purchase an initial 12MWh of NAS batteries for use in projects, while the partners will look to develop a standardised energy storage system solution pre-packaged with G-Philos’ PCS. The Korean company can provide PCS for NAS battery products ranging from 250kW to 1MW.

“With the increasing use of renewable energies, NAS batteries will be one of the most important solutions for storing electricity from renewable sources and, in particular, for CO2-free hydrogen production,” G-Philos CEO Gawoo Park said.

The partners will target the renewable energy market in South Korea as well as the wider Asia region.

NGK was is among participants in the project in Ena City, Gifu Prefecture, to create a local energy production and supply business combining rooftop solar PV with NAS batteries. The project was announced in April 2021 and got underway this year.

NGK will form its JV with one of the project’s other partners, electronics and imaging company Ricoh. At the Ena City project, Ricoh and NGK have worked together on a blockchain-based process tracker for supply, consumption and storage of energy.

The JV will look to combine NGK’s NAS batteries and ZNB5 zinc rechargeable batteries with Ricoh’s renewable energy distribution record platform, based on proprietary internet-of-things (IOT) and digital technologies. NGK will own 51% of the JV, and Ricoh 49%. Yet to be named, the JV will launch in February 2023. 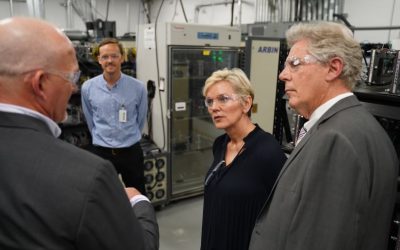 November 15, 2022
Long-duration energy storage (LDES) projects in the US will be able to compete for a share of “nearly US$350 million” of government funding.