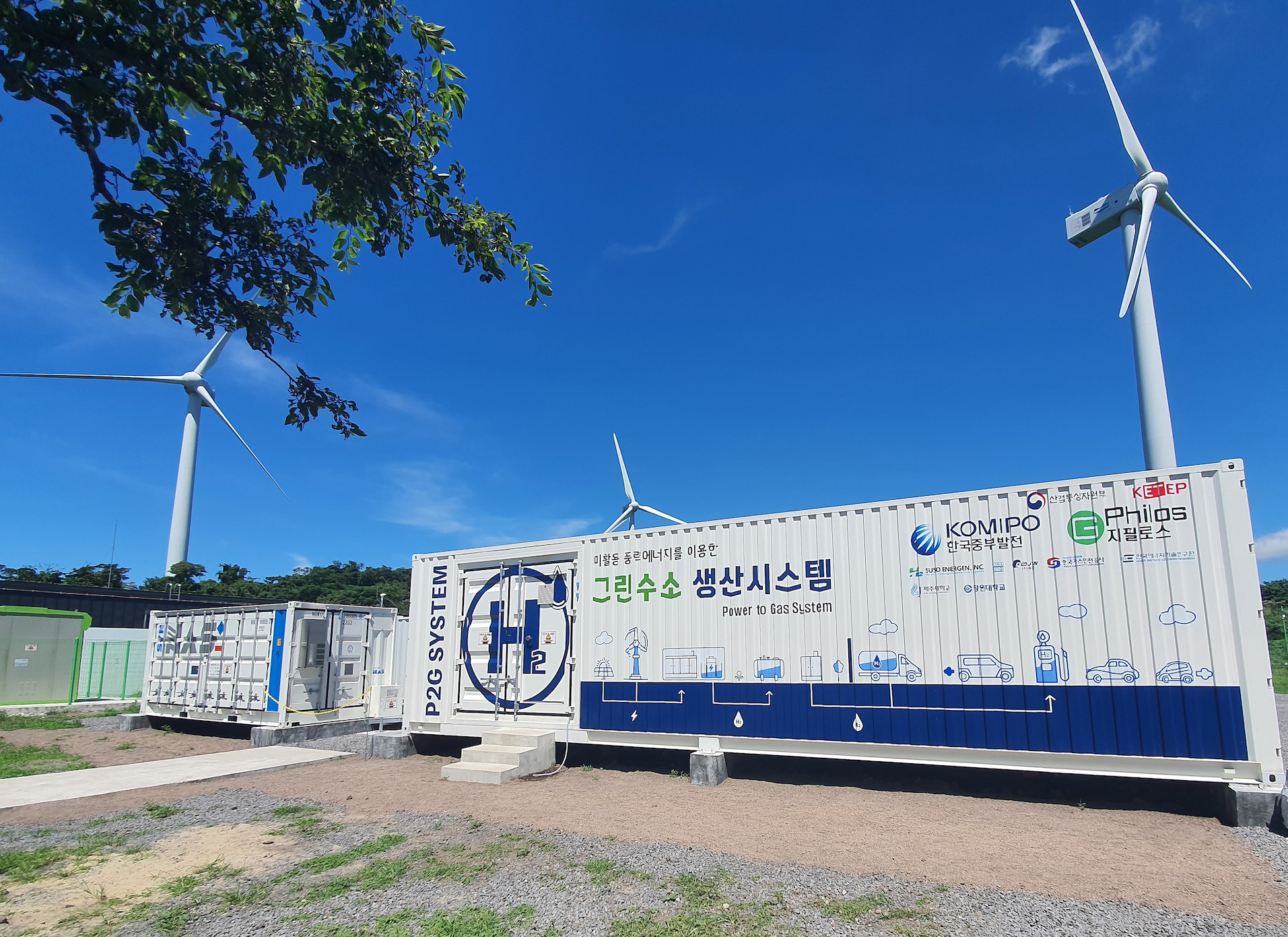 The power-to-gas (P2G) system at the 21MW Sangmyung Wind Farm, which includes NGK’s NAS batteries as a buffer to ensure that stable hydrogen production is possible despite the variable nature of the wind power generation onsite. Image: BASF NB.

Sodium-sulfur (NAS) batteries made by NGK Insulators will be supplied by a subsidiary of chemicals company BASF for power-to-gas projects by South Korean company G-Philos in global territories.

The combination of G-Philos’ power-to-gas (P2G) systems with the battery technology – of which NGK is the only manufacturer at present – could enable the expanded production of green hydrogen from renewable energy sources, BASF New Business said in a press release yesterday.

BASF’s recently-created subsidiary is focused on finding new areas for the German chemical company to diversify into that nonetheless relate to its core business activities. BASF New Business (BNB) has a distribution and sales deal in place with Japan’s NGK for the NAS batteries. The pair entered into the partnership in 2019.

The batteries have been on the market for over 15 years and offer high energy capacity with storage duration of between four to eight hours, operating at around 300 degrees centigrade and with an expected lifetime of 15 years of full daily charge and discharge cycles. The NAS battery technology was used in a project in Abu Dhabi completed last year that uses 108MW / 648MWh of the NGK systems.

The MoU between G-Philos and BNB to collaborate in P2G projects around the world initially covers the supply of up to 19.2MWh of NAS batteries up to 2022. The pair will also seek out projects where the a power conversion system (PCS) developed for NAS batteries by G-Philos could be used.

A green hydrogen electrolyser project at a 21MW wind farm in South Korea is already using NAS batteries as a buffer between wind turbine output and the electrolysers, which BNB said ensures stable hydrogen production from surplus wind power. That installation, at Sangmyung Wind Farm operated by generation company Korea Midland Power, uses G-Philos’ PCS with a 200kW NAS battery system. So far, G-Philos is able to produce PCS for NAS batteries of between 200kW and 800kW.

“In order to stably produce green hydrogen while accommodating the variability of renewable energy, the NAS® battery is expected to play an important role in securing system operation safety and reliable long-term operation as an energy buffer,” G-Philos CEO Gawoo Park said, adding that his company will continue to focus on commercialising green hydrogen production through various P2G projects.

Like many other governments around the world, South Korea is aiming to scale up green hydrogen production, with the equivalent of more than US$60 billion being put into a Green New Deal that will include investment in hydrogen with renewable energy.

NGK’s NAS batteries have not enjoyed the same attention as lithium-ion despite being put to use in various applications around the world. The industrial ceramics company's power business director Gauthier Dupont said a while back that the devices, along with other non-lithium energy storage technologies, require willing investors and the chance to establish large-scale manufacturing facilities to have a good chance of becoming competitive with the more mainstream, dominant technology even for the applications they are perhaps better suited for.

Meanwhile, BASF has also announced a partnership to further the development of “metal-free” flow batteries and electrolytes with a German start-up, JenaBatteries, which was made public in February this year. A company representative told Energy-Storage.news that BASF was keen to establish itself as part of the growing energy storage market. Previously, in 2018, the chemicals company also made an investment in ESS Inc, which, conversely makes flow batteries with an “all iron” electrolyte chemistry.