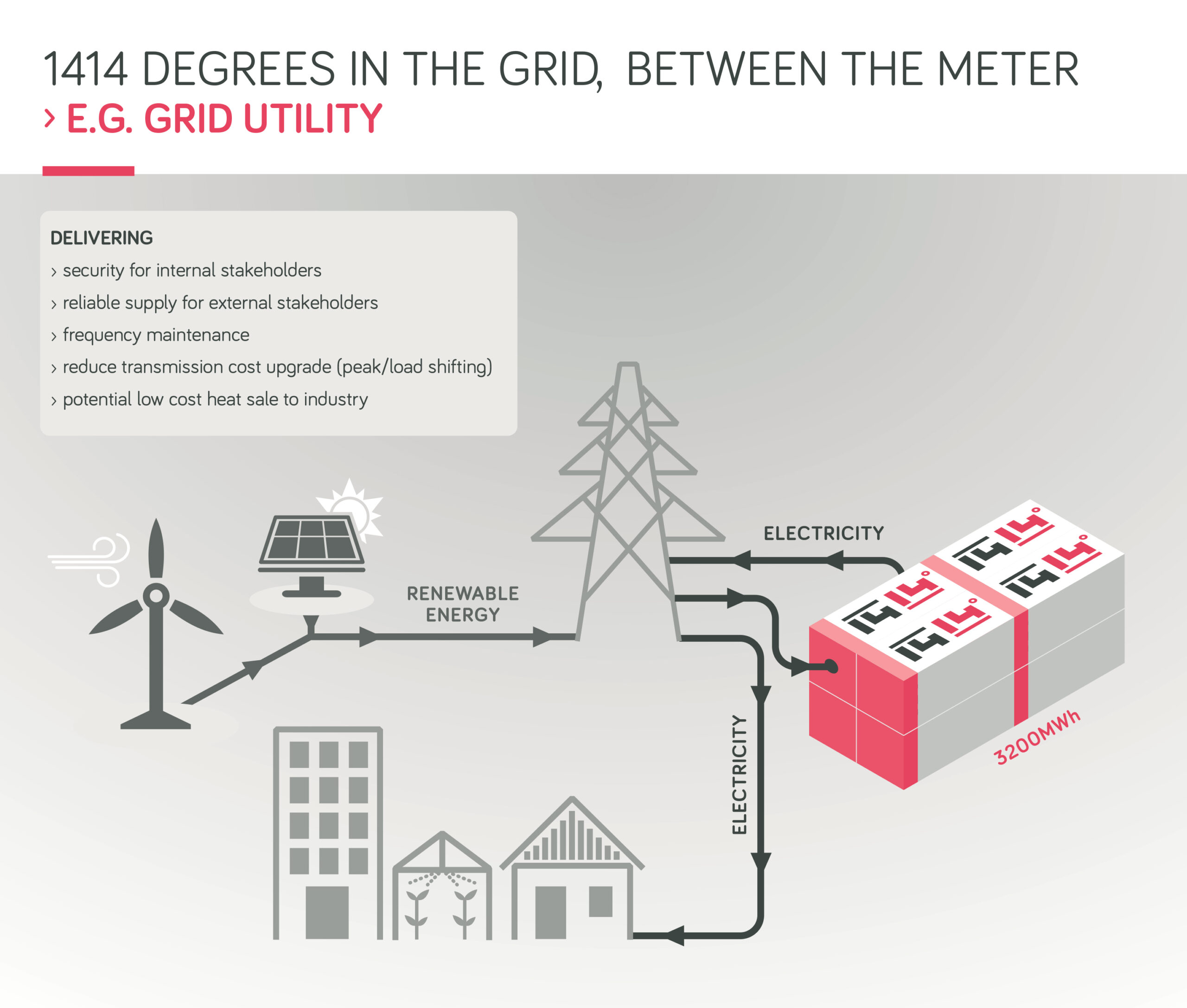 Schematic of 1414 Degrees energy storage system in use ‘between the meter’ in grid-connected scenario. Image: 1414 Degrees.

The company stores energy in molten silicon as latent heat, reaching 1414° Celcius, hence the name. The company claims that the high melting point of the material makes it capable of storing more energy than other phase change materials used in thermal storage.

The heat passes through an energy recovery system and through turbines to dispatch its stored electrical power and heat, with 1414 Degrees claiming it can behave as reliably and stably as a coal or gas-fired power plant. It is claimed the systems could have a lifetime of between 20 and 30 years in the field, compared to around 10 years for lithium battery systems or a third of that for lead acid.

The company signalled its intent to float the IPO in mid-April before revealing this week that it had submitted its prospectus to the Australian Securities and Investments Commission (ASIC) as required.

200MWh module to be built

“The IPO will enable us to commission three of our four key product lines in operating commercial industries and build and test a 1/15th scale cell of the TESS-GRID before proceeding with construction of a 200MWh module,” 1414 Degrees executive chairman Dr Kevin Moriarty said.

“The 200MWh TESS-GRID module will be built at a site with network connection to solar or wind generation. We have been working to identify a suitable location adjacent to the 100MW government peaking plant at the Adelaide Desalination Plant, and other sites have also been presented for consideration.”

According to Moriarty, a module with 200MWh storage capacity would use the equivalent of 400 tonnes of silicon, “capable of charging at up to 40MW” and could supply 10MW of base load electricity plus heating for more than eight hours.

In November last year, 1414 Degrees was one of the recipients of funding from the South Australian state government’s Renewable Technology Fund (RET). The company received a AU$1.6 million (US$1.2 million) grant for the total AU$3.2 million cost of deploying a 0.25MW / 10MWh system at Glenelg Wastewater Treatment Plant. That project will integrate energy generated with biogas with the storage system. 1414 Degrees has also signed contracts for commercial and industrial (C&I) projects for two companies in New South Wales, Pepe’s Ducks and Austcor Packaging.

The IPO seeks to raise up to AU$50 million – targeting a minimum of AU$30 million – with shares priced at 35 Cents each. Moriarty said the company had been aiming for the IPO for some time and in nearly a decade since 1414 Degrees was founded, close to AU$15 million has been spent on developing the technology already.

The CEO claimed over 8,000 prospective investors have registered their interest. He also said that he felt commercial and industrial customers in energy intensive industries would be likely interested in the heat storage as much as the electricity storage properties of the molten silicon tech.

“There is a huge market for our products – everything from grid scale deployment to use in factories and district heating projects,” Moriarty said, adding that 1414 Degrees wanted to be the “first to market” with such a solution.

Another Australian energy storage manufacturer, Redflow, is currently trying to raise AU$18 million to scale up its production as well as growing its sales presence domestically and abroad.

Following the recent opening of its dedicated factory in Thailand, the company is targeting the production of 90 units a month by June this year. It could then feasibly scale up to producing 250 units per week, if the market demand for them exists, company chairman Brett Johnson said.

Redflow wants to raise AU$18.1 million in total, placing AU$7.5 million in front of new investors and the rest offered to existing shareholders. Founder and former CEO Simon Hackett, now a non-executive director and the company’s largest shareholder, is expected to invest more than AU$1.8 million.

The flow battery maker, already listed on the Australian Securities Exchange (ASX: RFX) uses zinc-bromine chemistry in its devices said it will focus on markets in Africa, Asia-Pacific and Australasia, while it also claims to have been approached by “several Chinese entities” and is now “actively investigating strategic opportunities” in that market.