Solar and storage market intelligence group Sunwiz has just released its report into the Australian battery energy storage system (BESS) market, looking back on a record-breaking year for the industry.

A total of 1,089MWh estimated installations were made in all segments, with 30,246 home battery systems totalling 333MWh accounting for the remainder of the total.

Sunwiz has forecast that similar numbers are likely to be recorded for 2022, predicting 33,000 home energy storage sales (363MWh at an average size of 11kWh per system) and around 750MWh for grid-scale storage.

That would total around 1,113MWh, while the commercial and industrial (C&I) is poised for fourfold growth but will still remain an extremely small wedge of the entire market, Sunwiz said.

By comparison with another leading front-of-the-meter market, according to another research firm, Wood Mackenzie Power & Renewables, the US energy storage industry’s 2021 deployments stood at 3GW/9.2GWh of grid-scale battery storage and 3.5GW/10.5GWh across all scales.

State-by-state, Victoria accounted for 32% of the entire market, with New South Wales (NSW) on 24% and South Australia on 21%. Other states accounted for much fewer percentages, with West Australia on 9%, Queensland 8%, the Northern Territory 2% tied with the Australian Capital Territory (ACT) and Tasmania 1%.

That said, for Victoria it was a record-breaking year, while NSW has already recorded strong installation volumes and its tally of 7,377 installations was in line with figures in recent years. South Australia fell behind previous years’ rankings due to the downturn in subsidies in the state and its second place ranking in 2020 was overtaken by NSW.

Victoria hosts a 48% share of the commercial and grid-scale operating capacity today, with South Australia the next biggest at 24%, Queensland on 14% and NSW on 9%. Last year, the Victorian Big Battery came online, which at 300MW/450MWh made a big contribution to the state’s total.

Tesla, which supplied the BESS for the Victorian Big Battery, also supplied equipment to four other large projects commissioned in 2021, including the Wallgrove Grid Battery in South Australia (50MW/75MWh) and Bulgana Green Energy Hub in Victoria (20MW/34MWh).

A smaller project of note for its use of vanadium flow battery energy storage at megawatt-scale is the Yadlamalka Energy Project. A government-supported demonstration project, Anglo-American flow battery company Invinity Energy Systems will provide a 2MW/8MWh vanadium redox flow battery (VRFB) to be paired with 6MWdc of onsite solar PV at a site in South Australia.

There is around 1,000MWh of grid-scale energy storage currently under construction, but the development pipeline of projects is a massive 57GWh, according to the report.

A map of proposed commercial and grid-scale projects showed that nearly all in Australia’s east, with projects spreading inland from Sydney in NSW, concentrated in the south in Victoria and clustered towards the coast in South Australia. 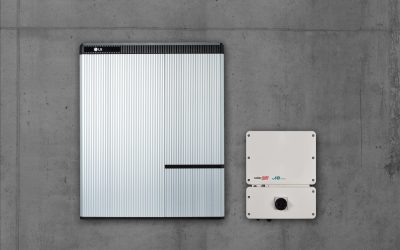