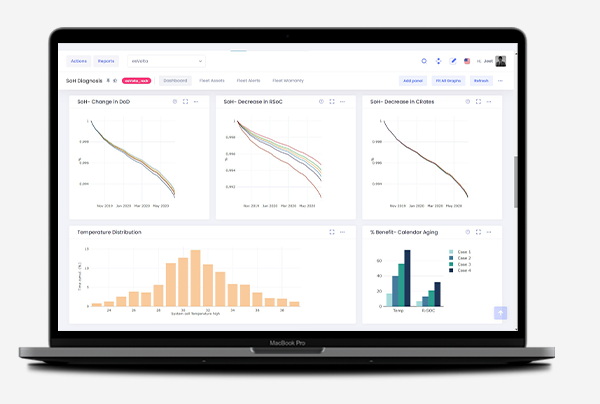 Amazon has invested in India-headquartered battery management software and electronics specialist ION Energy through its US$2 billion fund to support companies with promising sustainability technologies.

ION Energy co-founder and CEO Akhil Aryan emailed Energy-Storage.news yesterday to announce that the internet retail giant’s Climate Pledge Fund was among participants in a pre-Series A funding round worth US$3.6 million. Also joining the round were angel investors YourNest Venture Capital, Riso Capitol, Venture Catalysts, and others.

Founded in 2016, ION Energy targets both the e-mobility and energy storage system (ESS) markets. It has developed its own battery management system (BMS) platform, as well as a battery analytics software suite launched in 2019 that uses smart algorithms to gather and process data from batteries. In the ESS field, this means helping to optimise battery health, monitoring and predicting how battery cells will degrade while they are being used in multiple applications.

The company’s highest profile energy storage industry deal to date has been the onboarding of its analytics platform at almost 600MWh of mostly grid-scale battery energy storage systems (BESS) in California for developer EsVolta. At the time that deal was announced last August, ION Energy analytics lead Indresh Kumar said that the platform, called Altergo (originally called Edison Analytics) allows battery storage operators to adjust or correct their strategies for how the systems are used, preventing premature degradation of valuable cells.

Aryan and his company were profiled in a feature article on the importance of software in the energy storage industry for our quarterly journal PV Tech Power earlier this year. In that article the CEO explained the value proposition of the analytics platform in more detail.

“When you charge it and every time you discharge it, you’re actually causing the battery to degrade. If you want to get a sense of your net profitability per transaction, you would have to convert that degradation into a dollar value and take that as an input into your trading strategy,” he said.

Taking what he and colleagues had learned across various tech industries about machine learning technology and smart algorithms and applying it to batteries, the company’s platforms help ESS users make decisions about how to dispatch the stored power. ION has operations in France and the US in addition to its Mumbai headquarters and facilities in India.

“Amazon Climate Pledge Fund and ION share a common vision of a zero-carbon future, and we're grateful that they chose us to be their first investment outside of the US,” Aryan told Energy-Storage.news.

“Since our founding in 2016, we’ve been committed to building technologies that enable the future of mobility and energy storage. Today, we’re fortunate to have over 75 customers across 15 countries, managing over 700MWh of batteries”.

ION Energy said that the funding will be used to serve customers in its order pipeline, which is claimed to be worth more than US$15 million. The investment will also be used to grow the company’s software-as-a-service offerings.

“As we continue to identify visionary companies whose products and solutions will facilitate the transition to a low-carbon economy, we’re proud to invest in ION Energy, our first investment in India through the $2 billion Climate Pledge Fund,” Amazon’s VP and head of worldwide sustainability Kara Hurst said.

“We are inspired by ION’s mission to build technologies that improve the life and performance of lithium-ion batteries that power electric vehicles and energy storage systems, ultimately scaling solutions that help us all achieve our ambitious climate goals.”

Amazon is targeting net zero carbon across its operations by 2040 and previous targets of investment from its Climate Pledge include lithium battery recycling company Redwood Materials and electric truck maker Rivian.