‘Willing investors, manufacturing scale’ the only way for non-lithium ESS to reach the mainstream 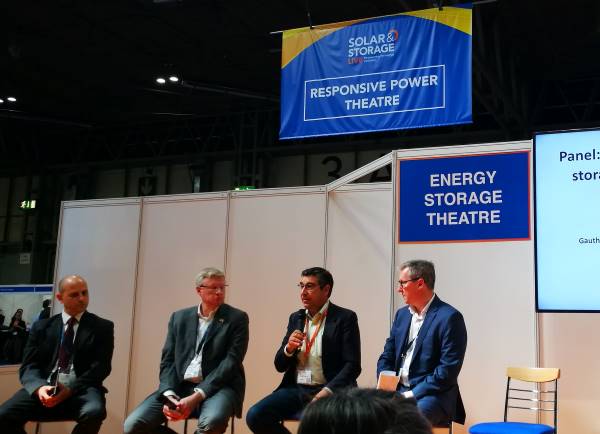 While lithium-ion enjoys the most media and customer interest at the moment, alternative technologies for storing energy could become competitive – if investors are willing to take them on to the extent that manufacturing efforts can be greatly scaled up.

That was according to a panel of industry representatives from different, 'long duration' energy storage technology companies, speaking in the Energy Storage Theatre strand today at this week's Solar & Storage Live show in the UK.

While the latter has already deployed 4GWh of its batteries to energy storage projects around the world since 2002, NGK's NAS batteries still come from “one small factory,” Dupont said.

“We didn't yet capture the benefits of economies of scale. Today, all of the investment more or less is going to lithium-ion. There is no, or very low investment in other technologies. If you made a Gigafactory for our batteries, we would reduce the cost by 50% – easily.”

Broadbit's David Brown said that his batteries, for which the main raw materials are salt, coal and sulfur dioxide (aka 'rotten eggs'), could achieve costs of US$70 per kWh if it could establish a 'megafactory'. A Gigafactory-scale manufacturing operation could drive that down to US$50, he said.

Meanwhile Highview Power's Nic Castelluci said that his company's technology runs warmed liquid air through large turbines. This means that many of the actual components used can be taken 'off the shelf' from other industries which also use them.

All of the panelists argued for the various merits of their technologies. However, there was a collective view agreed upon that while aspects such as safety and potential for safe disposal or recycling at end of life make each different technology a potential player in various markets, ultimately, customers' questions and concerns centre on costs relative to other solutions.