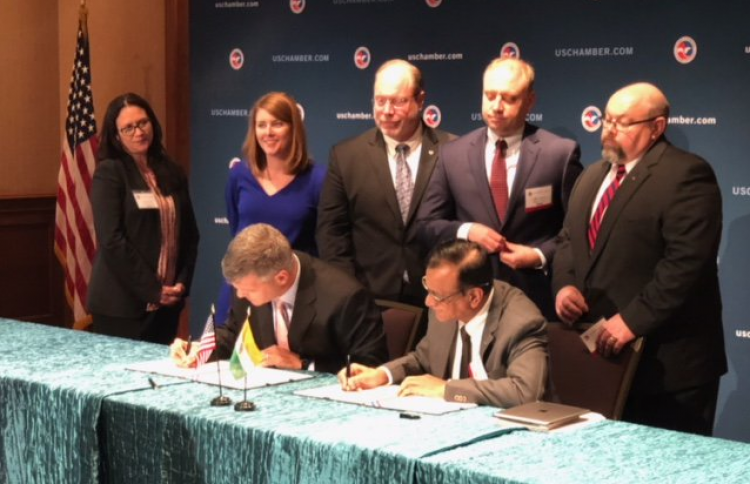 USTDA has already provided support for technical and financial assessment of wind, solar, and energy storage hybrid projects in the Indian states of Gujarat and Andhra Pradesh. Image: USTDA

The U.S. Trade and Development Agency (USTDA) is supporting a 41MW hybrid solar-wind-storage project being developed by private Indian energy firm IL&FS Energy Development Company Limited (IEDCL) in the Indian state of Andhra Pradesh by providing a grant to aid the plant’s technical design and planning.

The project stems from a memorandum of understanding (MoU) between IEDCL and the government of Andhra Pradesh to develop a project of 1,040MW capacity in total.

USTDA has already provided support for technical and financial assessment of wind, solar, and energy storage hybrid projects in the Indian states of Gujarat and Andhra Pradesh, which led to the MoU with Andhra Pradesh.

“Grid modernisation through hybrid projects like this one will help promote sustainable economic growth in India, and support the government’s goal of reaching 175GW of capacity from renewable sources by 2022,” said Jason Abiecunas, Black & Veatch’s director of Distributed Energy Resources. “Hybrid solutions, by optimising output and reducing variability, will also improve the bankability of renewable energy projects.”

Back in June, Solar Energy Corporation of India (SECI) tendered for 2.5GW of hybrid wind and solar projects to be connected to the Interstate Transmission System (ISTS), the country's main grid. This followed the Ministry of New & Renewable Energy releasing its ‘National Wind-Solar Hybrid Policy’ in May, seeking to encourage hybridisation of projects due to the benefits they offer for grid integration. The policy notes that any form energy stroage technology can also be added to such projects.

Earlier this week, USTDA's official Twitter account also 'announced' that the agency is working to support renewable energy uptake and improve energy access in Vietnam, partnering with national electricity delivery body Vietnam Electricity to investigate the feasibility of energy storage system development in the country. No further details appear to have been issued although the Tweet (below) also tagged the U.S. Department of State's Bureau of Energy Resources (ENR) and the private US Chamber of Commerce.