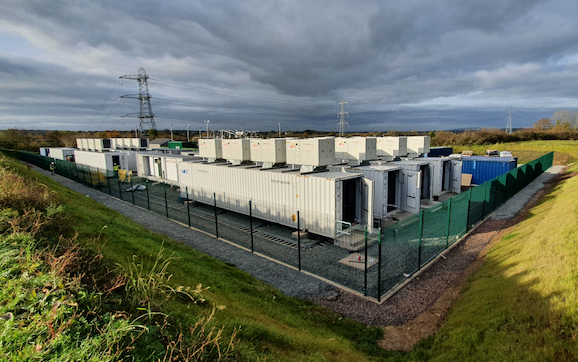 Drumkee, one of two 50MW battery storage projects in Northern Ireland that Gore Street took into the DS3 grid-balancing markets at the beginning of this month. Image: Gore Street Energy Storage Fund.

Gore Street Energy Storage Fund, one of two stock exchange-listed investment funds in the UK dedicated to energy storage, is proposing a new issue of ordinary shares at 102 pence (US$1.41) per share to raise further capital for its development pipeline of 1.3GW.

They will be issued as part of a non-pre-emptive placing pursuant to the company’s Placing Programme, with up to 190 million new shares available.

The placing is open with immediate effect, with proceeds going towards 1.3GW of accretive opportunities and near-term potential competition of an acquisition of an 80MW project, which is expected over the coming weeks.

Additionally, the funds raised will help accelerate the development of Gore Street’s existing portfolio, including its assets in the Republic of Ireland, which it is expanding from 30MW to 90MW.

In December, the company completed a £60 million equity raise, which has now been fully allocated across its existing portfolio of assets. The majority of this was committed equally between its Northern Ireland and Republic of Ireland assets. Earlier this year the fund also secured a £15 million revolving credit facility with banking group Santander to support its continued growth.

The company completed 100MW of battery projects in Northern Ireland at the end of March, taking its operational portfolio up to 210MW.

The two 50MW assets in Northern Ireland are started operations under contract to supply balancing services under Irish grid operator EirGrid’s DS3 scheme on 31 March, with the batteries almost doubling the fund’s operational portfolio, now comprised of 11 projects in Great Britain and Ireland. This is expected to more than double operational cash flow from the consolidated portfolio, Gore Street said.

The beginning of April marked the start of the contracts for Gate 4 of the DS3 flexibility start, with contracts for the next gate starting on 1 October 2021. The two Northern Ireland batteries form part of a 160MW portfolio of Irish storage that Gore Street acquired in 2019. Analysis by Solar Media Market Research showed that as of February, there were 2.5GW of battery projects at development stages in Ireland, with the DS3 a major driver.

It was able to supply 100MW of utility scale battery storage projects from its pipeline, with the proceeds of the fundraising to be used to finance a c.485MW pipeline of energy storage projects.

It is the third battery energy storage system project that the RSD Business Unit has completed during the last semester, and follows on from energisations of previous Gresham House projects including the 50MW/75MWh Wickham project and the 50MW/75MWh Thurcroft project. Gresham House’s operational portfolio upon the completion of Byers Brae and the February acquisition of two projects in England stood at 395MW.

Its parent company, asset management firm Gresham House, recorded a 29% increase in net core income and a 17% increase in adjusted operating profit from 2019 to 2020 in recently announced figures. This was despite last year being what chairman Anthony Townsend described as “one of the most challenging years we have seen” due to the COVID-19 pandemic affecting global populations and economies “on an unprecedented scale”.

Even with the backdrop of the pandemic, Gresham House saw a “busy and productive year”, with its assets under management increasing by 42% to £4.0 billion.

This article appeared as four separate items from 11 March to 6 April on our UK sister site Solar Power Portal and have been edited for our international audience.