‘To allow a zero carbon system, the role of energy storage needs to be understood by everybody’

The Energy Storage Digital Series, an online-only conference and webinar series, produced and hosted by the events division of our publisher Solar Media kicked off yesterday. Here are some highlights and key quotes from opening panel discussion: Predicting the energy storage tech of the future.

You can still sign up to join the rest of the sessions – free of charge – and you can also watch sessions from previous days on demand.

Predicting the energy storage tech of the future

While a poll found that the event's viewers believe that lithium-ion will continue to be the technology that dominates the industry still in three to five years’ time – a finding that came as no surprise to any of the panellists – there’s still a lot of scope for other technologies to complement lithium in today’s market and the future may see other options coming to the fore.

Imperial College’s Billy Wu said that hydrogen is finally starting to be seen as a potential mainstream contender, partly due to its versatility in being applicable for heat when added to the gas grid and for producing electricity through fuel cells. Wu said that every year felt like it got closer to the year that hydrogen can break through. There could also be a knock-on beneficial impact for flow batteries in terms of cost reduction if this became the case, Wu said, as electrolysers and flow batteries are likely to share many of the same components. 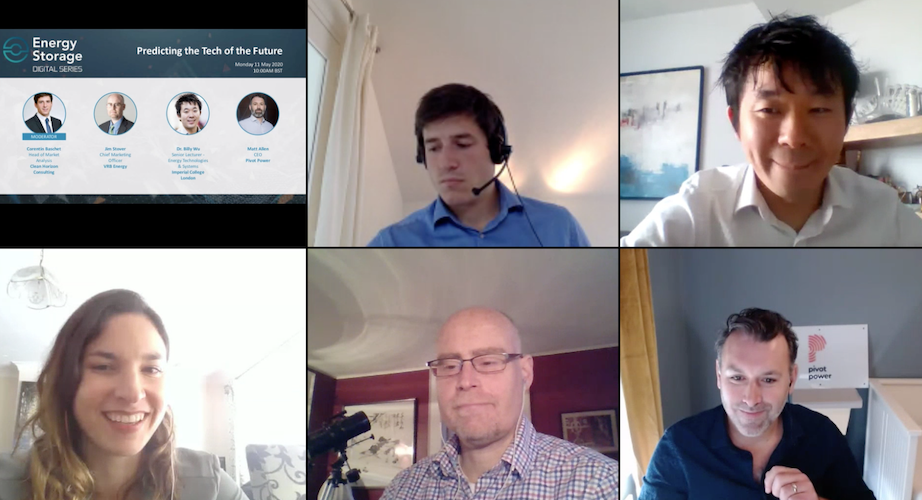 All of the above, but in intelligently designed proportions

While lithium-ion has obviously enjoyed the ongoing effect of scaled-up manufacturing through its use in consumer electronics and more recently electric vehicles, VRB Energy’s Jim Stover argued that the cost reduction curve of vanadium flow batteries has really only begun. VRB believes it can achieve cost reductions of around 10% to 15% with each doubling of manufacturing capacity, Stover said. Stover also played up the possible non-financial advantages of vanadium redox flow batteries (VRFBs): they are non-flammable and, partly due to the fact they use liquid electrolyte storing the power in tanks separate from the battery cell stack where power is generated, are not expected to suffer the same problem of cell degradation as is seen in lithium-ion energy storage.

Stover said that in fact, VRB is in discussions with one project owner in the US to potentially replace a lithium-ion battery energy storage system (BESS) that provides ancillary services in the PJM Interconnection market. The lithium battery has degraded in just three years, Stover said, while its vanadium replacement is expected to be more rugged and last longer in the field. Although one of the other key advantages of VRFBs decoupling power and energy is that they can store durations of energy of between six to 10 hours cost-effectively and are expected to come into their own as demand for longer duration energy storage increases, VRB’s Jim Stover said that his company had been in talks about replacing one-hour duration lithium BESS installations in various locations.

That said, there will likely be much side-by-side deployments of the technologies which could be complementary to one another: Matt Allen’s company Pivot Power is in the process of constructing an ‘Energy Superhub’ in UK university city Oxford that will combine lithium and vanadium in one system solution. Allen said that the two will perform different tasks – but one of the key reasons for also deploying a flow battery was to prevent or reduce the wear and tear and degradation that the lithium system will undergo as the Superhub performs roles including charging fleets of electric vehicles.

There was also a lot of serious consideration given to the sustainability of the energy storage industry and the systems and devices it uses. Lithium-ion battery production of course uses electricity and different manufacturers have different levels of sustainability in their processes. Billy Wu referred to European startup Northvolt, which claims it will be producing the world’s most sustainable battery when its two gigafactory facilities are built in Sweden and Germany. Matt Allen said that there remain “big headline questions that need answers,” on sustainability, from the use and sourcing of cobalt mined unethically and according to some reports with some manufacturers using child labour.

Day one of the Digital Series plunged into many of the technical issues around storage, there was much nuanced discussion around the ins and outs of what different types of energy storage can do. From the reduction of the amount of cobalt used in lithium systems to the recyclability and recoverable value of vanadium to the need to manage expectations when it comes to technology breakthroughs, there was a lot of ground covered in the hour-long opening session.

However perhaps the clearest message of the opening day’s first panel session came from Matt Allen of UK-based developer and investor Pivot Power, who described himself as the “non-technical one, offering less of a technical response”.

“We as the storage industry need to come together. If we’ve learned anything from previous consultations and reviews of government-level incentives, regulation and policy changes that have always been evolving, we need to have an aligned view on what the market needs. That is absolutely pre-requisite. There’s also a real need for us to get our story right for the general public as well and to allow a zero carbon system: it needs to be understood. We really need to get people onside to see how essential it is to have that system.

“We need to understand what the views are, what the concerns are from a general public viewpoint to get that buy-in and continue the momentum that we’re really starting to get at a grassroots level with a lot of the things that have been happening.”

The Energy Storage Digital Series takes place every day this week 11-15 May, you can sign up and view more information here.