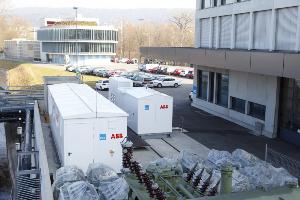 The project will dwarf previously developed battery storage systems in Switzerland – EKZ previously installed a 1MW / 500kWh Dietkon, Zurich using LG Chem batteries and in partnership with controls, power and automation giant ABB – which is headquartered in Switzerland. That project was completed in 2012 and is still operational, performing both behind-the-meter and front-of-meter applications including solar load shifting and primary frequency control.

While relatively small, the 1MW Dietikon system was actually the first battery energy storage system in Europe to provide primary control reserve (PCR) without backing from conventional thermal generation plants. Transmission system operators (TSOs) in Germany, the Netherlands, Austria and indeed Switzerland began a joint ancillary services market for PCR in 2015 and EKZ and partners produced a detailed study on the Dietikon project which detailed the battery’s effectiveness in its first years of operation.

The new 18MW / 7.5MWh short-duration system will also be used to provide primary control reserve (PCR) frequency regulation, to the grid and will be used on a commercial basis, owned and operated by EKZ once it is completed – expected to be in early 2018. Successfully delivering PCR, to balance and correct grid frequency deviations after faults, requires systems to respond within 30 seconds of a signal from the grid. As levels of renewable energy on the grid rise, the need for additional rotational inertia increases, meaning the need for efficient PCR becomes more urgent.

Besides the Dietikon project and a couple of other lithium-ion, compressed air and flow battery pilots, mountainous Switzerland is host to several large-scale pumped hydro projects. According to an interview with EKZ smart grid engineer and project manager Marina González Vayá, while they are good for storing large amounts of energy for long periods, pumped hydro plants cannot react as quickly to signals as batteries and are located in the mountains away from most urban centres and therefore have an associated cost for power transmission. Therefore, González Vayá said, batteries and pumped hydro could be complementary to one another in meeting Switzerland’s changing energy needs.

Talking specifically about the new project, González Vayá said it was “an important step towards a reliable and sustainable energy future.”

NEC ES works as a system integrator and technology provider to the energy storage industry, with marketing director Roger Lin saying recently that his customers view the company as a kind of “energy storage EPC”. While parent company NEC Corporation sold off its battery manufacturing business AESC (Automotive Energy Supply Corporation), a company owned 50-50 by NEC Corporation and carmaker Nissan in August, NEC ES’ activities will not be affected, as AESC was considered one among many potential battery suppliers to NEC ES projects.